This was originally posted to the DC IMC 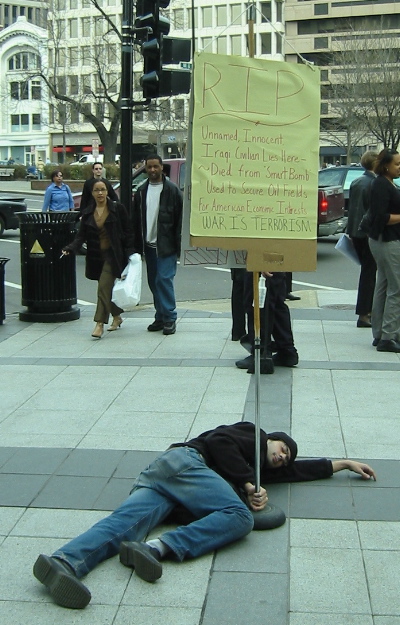 Summary of my Day’s semi-Solitary Protest

After watching Bush’s speech last night I knew that our country was going to war for sure. Shortly after the speech was over, as I was flipping through the different stations, looking for the best commentary on the speech, I had the idea pop in my head of how I was going to spend the next day: Dead!

Luckily, it’s spring break for GWU students, so I had the whole day to make my protest be known. After my friend left at 10:30am, I went back to my dorm and began planning on how I’d construct my sign. I knew I’d use the cardboard signs I had been using in the past, but I needed some new words to be read. Across the hall is the staff break room, and I found a massive Post-It notepad that is used for presentations as well as a microphone stand that was only half setup. I snagged both! I widdled the broom stick I had been using lately to fit inside of the mic stand and then I peeled off two of the Post-It notes and affixed them to the cardboard and stapled them to make sure they didn’t fall off. Then I strung them up to the broom handle and wa-la! I had my protest sign that would stand on its own!

I left my room at noon. Walked down to 19th & K where I did my first pratfall, and yelled “AHHHH!” and laid down over the side of the mic stand to make sure it would not fall over from the wind. After about 5 minutes I noticed that the Golden Triangle security were on to me, and I politely and naively asked a guard how long I could lay there without being detained for loitering. After the third guard arrived I figured it was too hot, so I got up, dismantled my mic stand, and began to cross K St. Before I made it to the intersection, I was stopped by three DC Police Officers. They asked me what I was doing, how many people I was with, and how long I had been there. After I answered the questions, primarily, the one about me being alone, the officers were rather nice to me. Officer Larkin joked to me and said that I should have brought some ketchup, and I countered that by saying I’d get in trouble for littering. He asked where I was heading next, and I responded by saying that I was making my way to the the Dupont Circle Metro. He offered the advice of staying out of the human traffic and ended with “More power to you” With his name in my head, and his permission I knew that this was going to be a successful protest.

My next stop was a whole block away at 19th & L street. I laid there for about 20 minutes, until a worker from inside the bank (I believe) asked me to move, and I thanked him, packed up my stuff and move to my next stop which was M St & 18th. Where I had ample room to lay down and silently protest. This is where I ran into Brian, who opted to take some photos of me: It was great to see that someone from the Indymedia was on the scene first :-)

My next stop was one of my favorite stops of the day. I laid on the ground in Dupont Circle and was ogled at by a lot of folks. I had some of the best support here. A lot of people would walk by and say “Well Done” “Keep it Up” “You are right, War is Terrorism”
After about 30 minutes here, I shuffled over to the North entrance of the Dupont Circle Metro. I only stayed here about 15 minutes, but as I was leaving an elderly street merchant with a full beard and a cane, gave me some bread and said thank you. His grandson said he was from Afghanistan and had many of his friends die in much the same way. This same person also shouted at a pedestrian that grinned as they walked by me- he said “ITS NOT FUNNY!”

I walked down to L St & 20th where I spent another 15 minutes. I didn’t get much feedback so I moved to my final destination of the day: Foggy Bottom Metro. Here I had the most fun of all!

I’m not exactly sure what time I arrived, but it was somewhat busy and well before rush hour. As I laid there I had a British lady ask if she could take some pictures of me. I obliged and she said that she didn’t agree with Blair and was against the war as well. Shortly after her, a homeless man offered me a blanket and a flower. These props helped aid the protest so much- a lot more than some ketchup would! So I wrapped myself in the blanket and help the flower up against my chest. About 30 minutes later a lady came by and thanked me for what I was doing and kissed me on my forehead. I blushed :-) About 5 minutes later, a reporter named Anne Mulkern [amulkern (at) denverpost.com] from the Denver Post came by me and said she was doing a story on the reaction of the protests and the war. She asked me a few questions about how I felt (which was rather obvious), what I thought was going to happen, and how I’ve changed my life because of the war on terrorism etc.

At the end of the interview, the lady who kissed me came back, and she announced that she was going to sit with me and that she had brought a friend to keep us company. It turns out that they were both English teachers at local universities. They brought a small, “$$$ for Schools” sign, which I liked. After chatting for about 30 minutes or so they had to leave, but they thanked me for my time and I bid them well. Around this time, the homeless man came back and gave me some food, which I thanked him for. After I ate, I had a woman hover over me and tell me she was from Jordan, and she has family and friends in Iraq. She went on to thank me for speaking for them. I wished her well, and she walked away with a smile. Shortly afterwards, as I was looking to the sky, I could see a rainbow had formed above me

For the rest of the time, I just laid there until it was dark enough that I didn’t think people could read my sign well anymore, and I opted to leave. I chatted with a different homeless man as I packed up everything. He said that he agreed with what I was doing, but said it was pointless because we are going to war anyways. I countered that by saying that I was laying dead on the ground with the hopes of changing public opinion.

Overall, I had very few people give me bad vibes. One man said to me, “How would you like if I started kicking in you in the stomach? Would you want the police to come? Well that is the same with Iraq” It took me a hot minute to realize what he was saying, but before I could respond he was probably back in his office. I also had some issues with some kids who didn’t quite get the message. One of them was bouncing the basketball dangerously close to my head on purpose, and I politely asked him to refrain. Upon which I was surround by about 10 youths and they said I was supposed to be dead, and why was I pretending to be dead. What I got out of the encounter was that the kids had been watching a lot of TV. I can’t really describe it, but their demeanor showed that they were in the know about the events at hand, but had only gotten one side of the story. Aside from them, and a few more “Fuck Offs” and “I wish you were dead”‘s It was a lot of fun. There was an overwhelming amount of support from people, and hundreds of people actually stopped to read the sign and take pictures.

Again, I’m advocating these solitary protests! It seems that the cops have more problems when there is more than one person protesting. I think they believe that one person will just be viewed as a loony, and therefore not much of risk. Also, when it comes to the rallies & marches, like the one that took place last weekend, they are supposed to make you feel empowered to go out and do something. It seems that they are more about reading other people’s signs and less about taking the message to the next step- to the people who aren’t protesting. I feel as though what I did today had more of a net effect than my marching did on Saturday. And I know it did!

If you have 30 minutes to spare, or a lunch break to kill off, do something by yourself to tell others how you feel, because it is up to us. Each of us has the power to tell others the truth and its time to step up and speak.

Post Title: Solitary Die-In before the invasion
Posted in: Activism