I celebrated Buy Nothing Day alone this year, but I wrote about on it on DC Indymedia.

By Tommy Nguyen
Washington Post Staff Writer
Sunday, July 4, 2004; Page D01
….
“People scoff at it, or say mean things to me, but they all understand the idea of the flag: that America has been bought by the corporate system,” says Schiller, who, at other protest opportunities, has used his corporate flag as a cape. After showing on his home computer some footage of his activist adventures, he admits that wearing the flag that way was “stylistically dorky.”

I tweaked CNN’s footage of George Bush’s Veterans Day speech using Final Cut Pro with some photographs that I supplied.

This video can also be found on my video player.
(scroll down)

Free Beats kicked ass. Over 120 people showed up and danced. Check the pictures. 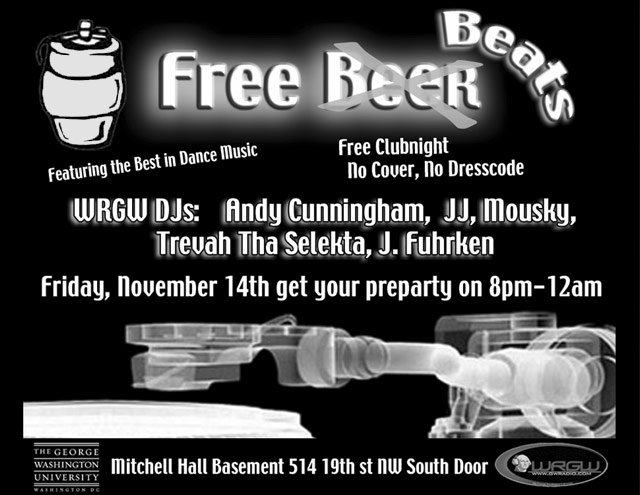 As the director of the electronic music department at WRGW, I helped design this flyer for my next WRGW DJ event.

I canvassed areas around Chantilly for the Virginia State Senate race. My “candidate” was Bill Mitchell, who ended up losing…