In the future, changes will be mapped in space and time so changes in data on a map can be seen in “real time,” Dangermond said.

“The thought is that we as human beings will be more conscious,” Dangermond said. “We’ll be able to think like a society because we’ll be able to see what we’re doing to the planet.” 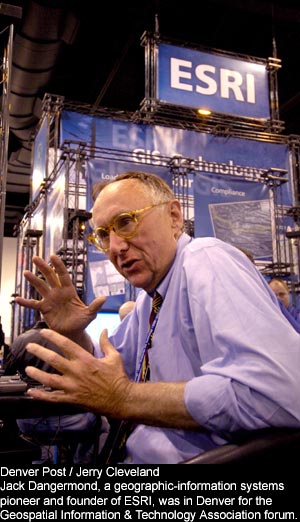 Jack Dangermond is the president of ESRI and one of my heroes. I randomly ran into him about a month ago at a National Geographic Society event. I was hoping to meet him at a different event, but right when I walked into the building he greeted me and told me that the presentation was about to begin. I had no clue that it was him! It wasn’t until I sat down that I realized that I had been greeted by the Bill Gates of GIS. I plan on sending him one of my renderings in the near future as a token of my appreciation. Maybe I should make him one called the “Star of Redlands” :-)