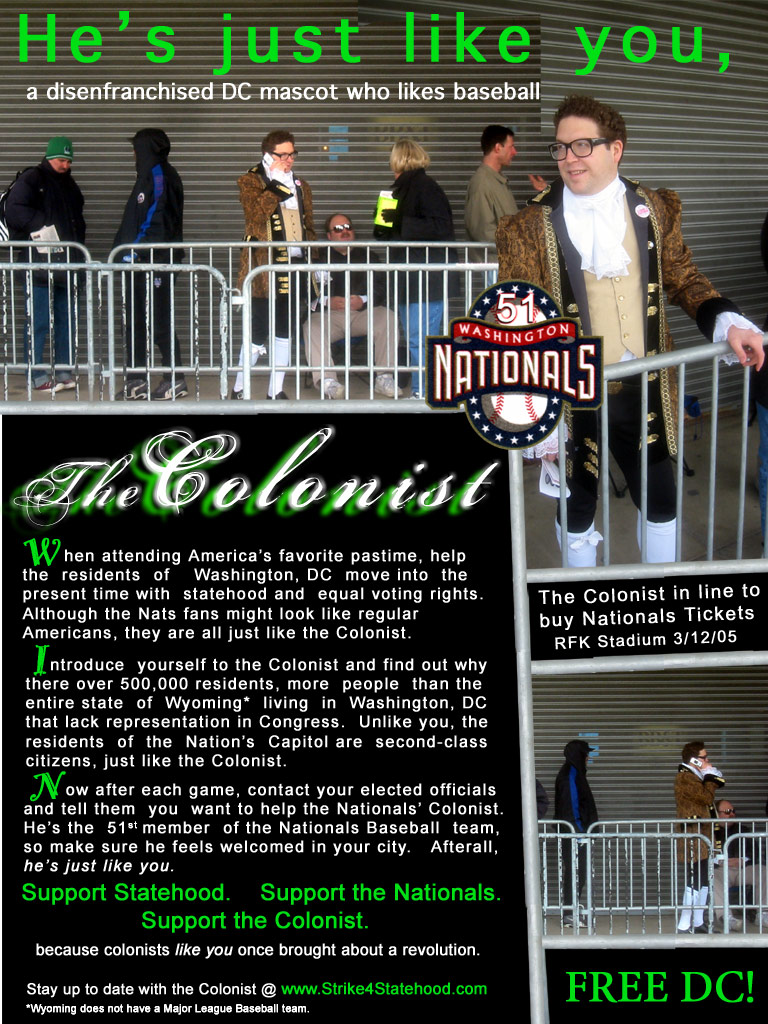 Activists Want The Colonistâ€š to be Nationals Mascot

WASHINGTON, DC – Twenty DC Democracy supporters calling themselves the DC Colonists, will be out in force during the first baseball game at Robert F. Kennedy Memorial Stadium in over 30 years. During the Sunday, April 3, exhibition game, twenty baseball fans/activists plan to flash placards that spell “Strike 4 DC Statehoodâ€š” after every strikeout.

“We are not doing this to protest the Nationals. We are very excited about baseball coming back to DC,” John Capozzi said, “Baseball is an American pastime. Democracy is an American principle. By attending this game with our signs, we are showcasing our support for both.”

“We would love to have our mascot, The Colonist, become the official mascot of the Nationals,” said Adam Eidinger, who purchased the 20 tickets on March 12 wearing a full 18th Century costume, “We want baseball fans from all over the country to understand that DC residents are effectively second class citizens due to our lack of Statehood.”

Unlike citizens of states, DC residents pay federal taxes, yet lack full representation in the U.S. Congress. Additionally, DCâ€šs local budget must be approved by Congress before it is implemented. Any Congressional delays prevent the District from spending new funds on such urgent needs as health care, schools, and public safety. Finally, Members of Congress can attach “riders,” restrictions that negate the wishes of DCâ€šs voters. Current riders include a ban on needle exchange programs to prevent HIV/AIDS and a prohibition on implementing the initiative to allow marijuana to be used for medical purposes. If DC were a state, we would have full representation in Congress and local control over our budget.

The DC Colonists plan to attend many Nationals games at RFK and in cities across the nation throughout the spring and summer.

DC Colonists is a project of members of the DC Democratic Party, DC Statehood Green Party and Stand Up! for Democracy in DC Coalition.

This should be fun….

We made on FOX NEWS…