WASHINGTON (AP) — The Supreme Court on Tuesday overturned the conviction of the Arthur Andersen accounting firm for destroying Enron Corp.-related documents before the energy giant’s collapse.

The court said the jury instructions at trial were too vague and broad for jurors to determine correctly whether Andersen obstructed justice.

The ruling is a setback for the Bush administration, which made prosecution of white-collar criminals a high priority following accounting scandals at major corporations.

After Enron’s 2001 collapse, the Justice Department went after Andersen first.

Enron crashed in December 2001, putting more than 5,000 employees out of work, just six weeks after the energy company revealed massive losses and writedowns.

Government attorneys argued that Andersen should be held responsible for instructing its employees to “undertake an unprecedented campaign of document destruction.”

Last night I had the pleasure of seeing “Enron: The Smartest Guys in the Room” at the E Street Cinema, and I must say that this ruling is completely bogus. Not only was Arthur Andersen complicannt in the destruction of the files, they signed off on cooking Enron’s books.

For Enron to get away with what it did there needed to people high up at Arthur Andersen to okay the dodgy procedures Enron followed. The claim that the papers were shredded because they were not going to be used or related to the case is the most abhorrent. The million dollar kickbacks that were given to top Arthur Andersen execs makes this ruling further off the mark. 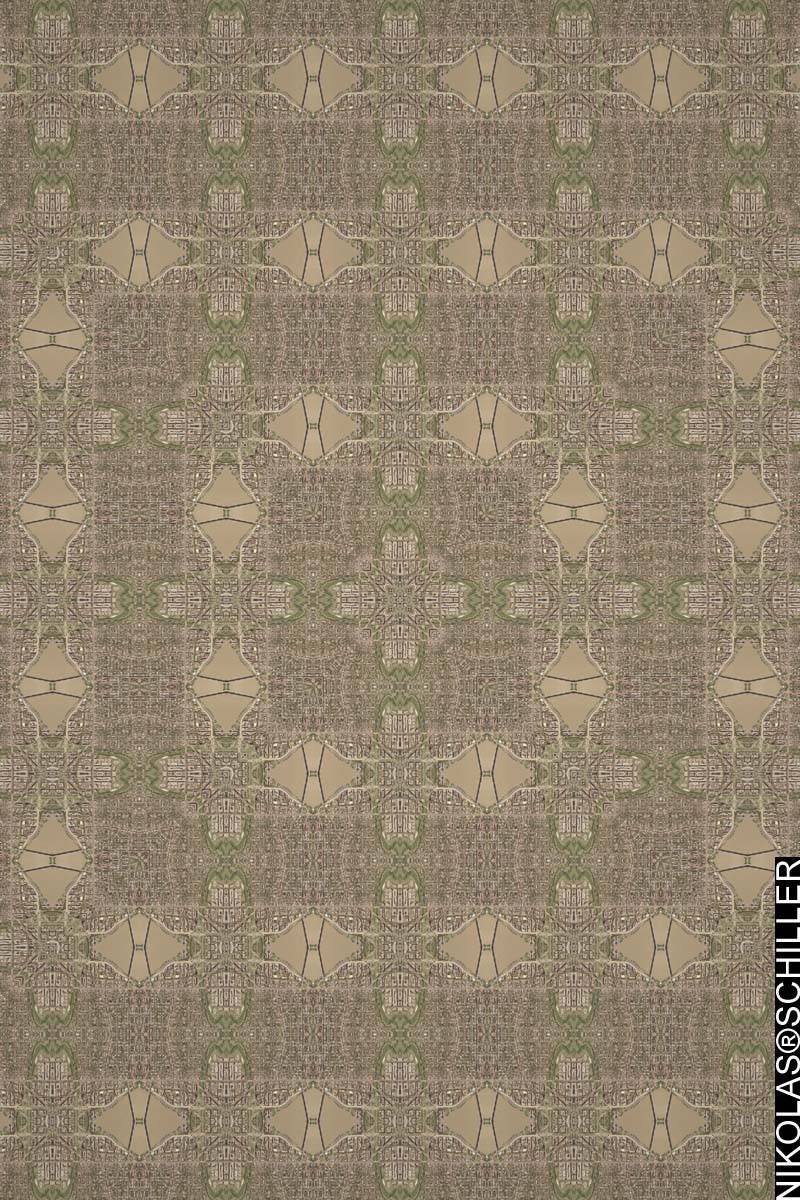 As for Georgetown Quilt, I really like the way the Key Bridge and the Potmac create the diamond shapes in the rendering. My eyes are drawn to them first! This rendering definitely solidfies my Quilt Project, which means that I need to create a new page on GeoSpatial Art to house these prints…. I’m not going to do that today though, instead I am spending my Memorial Day backing up my renderings. I almost have enough backed up to mail to my mom for safe keeping! Call it a geo-memorial day :-)

When I was looking over my last post, I realized that embedded in that screenshot was the weather outside. By using WeatherPop in my menu, the time (2:18:12pm, Sunday, May 29th), space (Weather was partly cloudy, 75 degrees), and place (Washington, DC) were recorded.

The Oakland-based company on Thursday is launching its latest effort to win more fans. The hook: A new feature designed to provide more immediate answers to inquiries.

With the change, Ask Jeeves will display a “Web Answer” to many of the requests its search engine processes. For instance, if someone enters “world’s largest lake” into Ask.com’s search box, the top result will include a snippet listing the Caspian Sea, including its size and location.
…

…but not an aerial or satellite image of the location.

Google has that already……or does it? 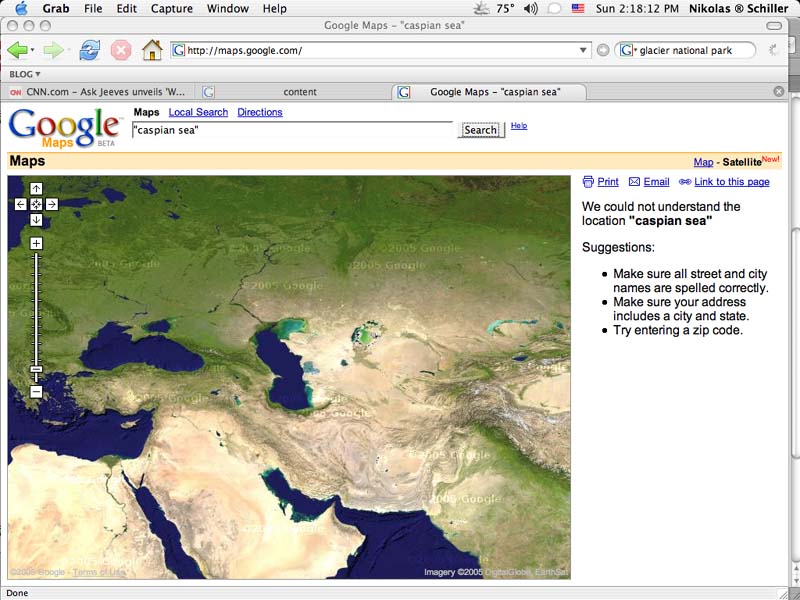 (to get this screen shot, I first went to https://maps.google.com, selected “satellite,” then panned over to the Caspian Sea, then I put “caspian sea” in the search box, and hit search) 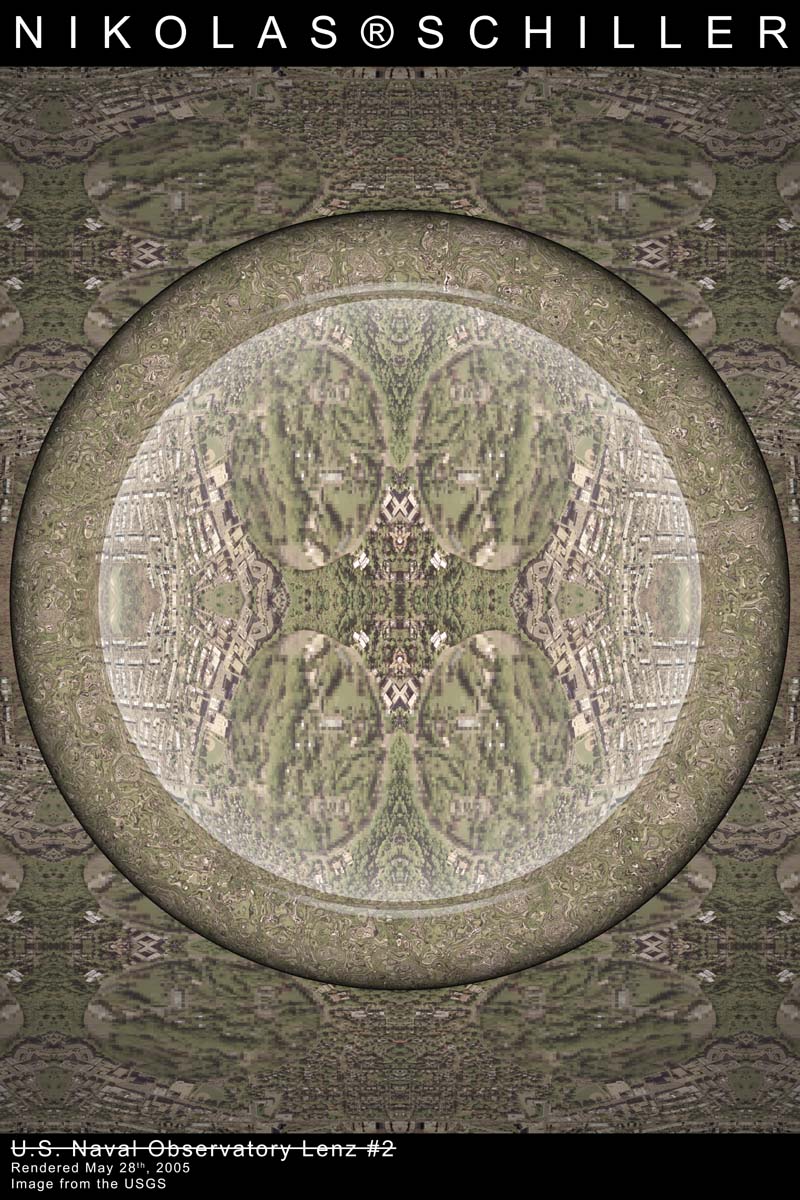 I decided to update this rendering using the same template I’ve used for all the Lenz Project renderings I’ve made in 2005. I never really liked the way the old rendering looked much, and I’m still not 100% satisfied with how this one turned out, but oh well. Up next, Georgetown!

Using my federal tax returns I purchased 4 more prints and one for my mom. I decided to order nothing but DC related prints! I have chosen this route because I think I’ll have the best chance of getting them shown here in DC if the subject matter is DC (more people pointing and saying “hey I live there”). I think makes perfect sense! I’ll have over 10 (of nearly 40 “signed” prints) in my house by next week :-)

taken from YahooNews via USAToday:

President Bush uses some phrases over and over:

Aiming to disarm reporters, he tries teasing humor:
â€¢ Surprising a reporter by calling on him: “If you don’t raise your hand, does that mean you don’t have a question?”
â€¢ After he referred to a reporter’s daughter when, in fact, the child is a boy: “Excuse me. I should have done the background check.”
â€¢ Teasing a TV reporter: “He’s a sensitive guy. Well-centered, though.”
â€¢ Bidding farewell to reporters as he prepares to go to his Texas ranch for a holiday: “I look forward to not seeing you down there.”

To connect with viewers, he tries folksy remarks:

â€¢ “In this job, you’ve got a lot on your plate. … You don’t have much time to sit around and wander, lonely, in the Oval Office, kind of asking different portraits, ‘How do you think my standing (in history) will be?’ ”
â€¢ “I readily concede I’m out of my lane (discussing complex Medicare issues). I’m not pretending to be an actuary.”
â€¢ “The Crawford Pirates are the (Texas) state 2A, Division II champs, and we look forward, don’t we, to wave the championship banner above the Crawford High School.”
â€¢ “The Oval Office is the kind of place where people … walk in and get overwhelmed in the atmosphere, and they say, ‘Man, you’re looking pretty.’ ”

Pretty good analysis I must say…

After churning through the IP addresses of those folks who downloaded the imagery I posted yesterday to the U Street News Listerv, I was VERY suprised to see SO MANY downloads from the military. I have got to wonder if these are in relation to their “Internet War Games“?

Here is a sampling of people from who downloaded the imagery:
END_OF_DOCUMENT_TOKEN_TO_BE_REPLACED 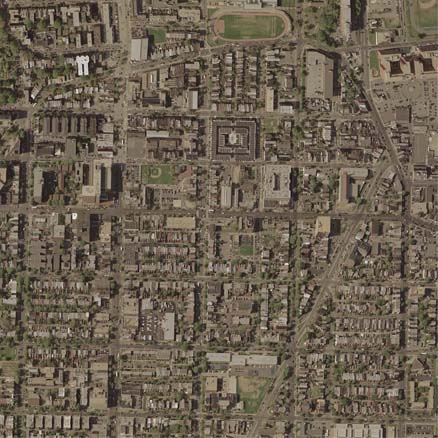 Today I read this DCist post and finally discovered what the listserv was for my hood…. So this evening I cropped one of my hi-res aerial photographs, and I posted the links (different resolutions need different links) in a nice post to the list. I hope the imagery is used to help the area!

Working the community mapping projects with the USDA and My Community, Our Earth programs made me want to give the imagery, which has just been sitting on my computer for months, out to a broader audience. I’d really like to see (or hear of) people using the imagery to show where street lights are out, where the best place to buy food is, where recent crime has taken place, etc etc. An aerial photograph can show a lot, but what it doesn’t show is what is going on in the area. I sincerely feel that an image (like the one above) can actually empower someone because they see the context of their surroundings in a different form.

I now have a decent-sized series of renderings that are devoted to where I live, Washington, DC.