The aircraft flew over the vice president’s residence, a senior federal security official said, came within moments of reaching the White House and was close to being shot down.

Let’s use World Wind to visually see how close this plane got, and more importantly assess what a lack of security this really shows…..

Using a screen shot from World Wind and a picture of a Cessna, I came up with this rudimentary analysis of where the plane was and the possible debris area if the plane was to have been shot down by the armaments on top of the White House (click on the image to view the full size image). 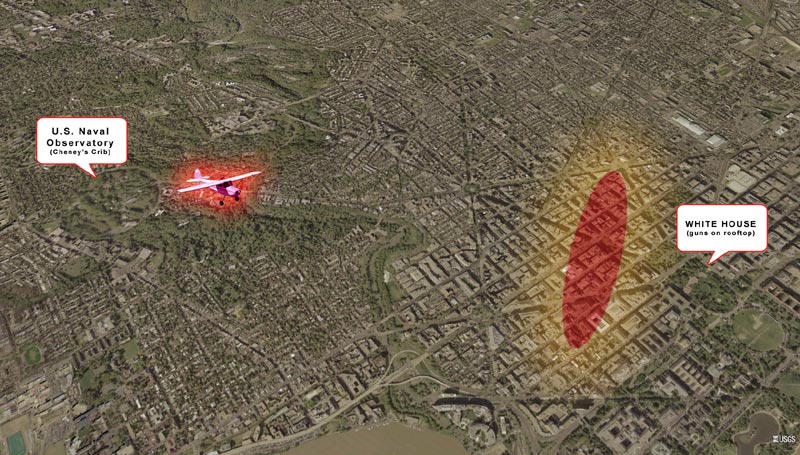 Of course this is a very rough spatial analysis of the potential debris area, but the proximity to the White House the plane made it to is dumbfounding. The article in reference above stated:

Two lost aviators flying with outdated maps from a rural Pennsylvania airstrip yesterday triggered a red alert and the frantic evacuation of the White House, the Capitol and the Supreme Court before they were intercepted by Air Force jets firing warning flares.

All I can says is: OUTDATED MAPS MY ASS! You can see the Washington Monument from the air all the way out in Rockville, MD (I’ve seen it from the 10th floor of a high-rise at the Metro stop) and it is well known in the aviation community that there is a restricted fly space over DC. The pilots didn’t need maps to know that they were in restricted fly-space, they could see the Washington Monument quite easily and continued to fly toward DC.

The graphic above, nor most of the media accounts fully explains the direction the pilots were going- were they heading due south or were they heading southeast. If they were heading due south, they would have also crossed into the no-so-restricted airspace of DCA and might have gotten very close to some very large planes taking off or landing (I do not know the direction of the winds on that day). If they were heading southeast, then the analysis above would most likely be somewhat correct. (Do you work in that area?)

If you ask me, if this is all very very fishy. They could have dumped a canister of aerosolized anthrax over the DC area and then chucked the canister out the window to get rid of any evidence. I could easily make another map showing the theoretical diffusion of such a situation. What if that plane was holding a few pounds of radiological material onboard? If that plane was shot down, downtown Washington, DC would be a radioactive mess, a mess that could have been prevented.

I bet this was simply a test on the emergency response system in the DC area. The scare during Reagan’s funeral seems wholly legitimate compared to this event. This one seems too perfect. Have a small, harmless plane cross over into the restricted airspace of DC, gauge how fast the emergency response apparatus acts, and then see how it can be tinkered to not allow such an event to take place again. The whole “we were lost” line is such utter bullshit, and I think this “test” seems like a much better explanation.

Jill Martin says from her home in Akron, Pennsylvania, that she believes the Washington incident was a simple mistake. She says her husband was discussing the flight with her last night after he and Sheaffer made their flight plans and was talking “all about the no-fly zones and how they were going to avoid them.”

If my theory is incorrect, he must be one hell of a stupid pilot that shouldn’t hold the yoke of a plane again. His teacher too.

===/=== 3:30pm===\===
After looking at the Washington Post map of the flight path, I’ve found my analysis to be completely incorrect. The plane came from the northeast and flew over the U.S. Naval Observatory on its flight out of DC, thus my graphic above is severely inaccurate. Oh well, it was fun to make!

Post Title: Cessna Analysis
Posted in: Analysis, Commentary
Last edited by Nikolas Schiller on 8/26/2009 at 12:10 am