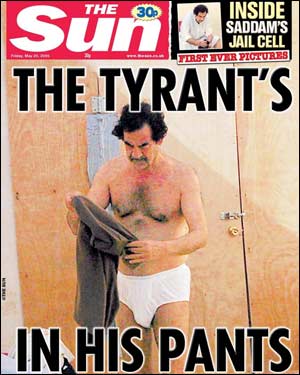 Article 3 of the Geneva Convention relative to the Treatment of Prisoners of War states:

To this end the following acts are and shall remain prohibited at any time and in any place whatsoever with respect to the above-mentioned persons:

(a) Violence to life and person, in particular murder of all kinds, mutilation, cruel treatment and torture;

(b) Taking of hostages;

(d) The passing of sentences and the carrying out of executions without previous judgment pronounced by a regularly constituted court affording all the judicial guarantees which are recognized as indispensable by civilized peoples.

The photograph above, in my opinion, clearly violates section c.

I sincerely feel sorry for Saddam right now, I mean, what if that was your grandpa in his skivvies? Would you like this picture being used as tabloid fodder? I think not.

The photographs of Saddam were published in publications owned by Rupport Murdoch, The Sun and The New York Post, and I think Murdoch had the option of not allowing these to be printed. But why not make a few bucks at the expense of a dethroned dictator right? I sincerely hope that Saddam sues him for the amount of money that was made from the sales of the issues where the illegal photographs were printed.

Murdoch is definitely the Bad Santa….