Its a great story too!

Via the Green Pages:

Using baseball and the media to advance social values
A case study by a media maverick
By Adam Eidinger
D.C. Statehood Green Party 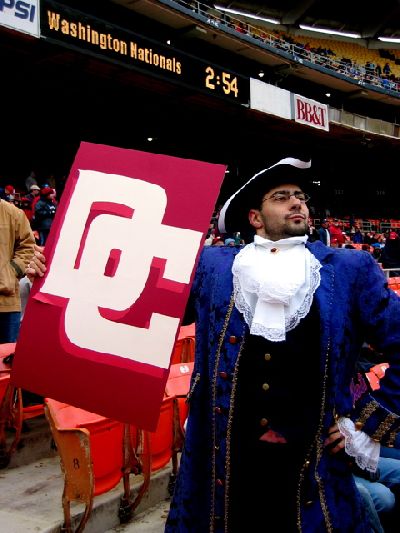 I dressed in a colonial costume on the first day tickets went on sale for
Washington, D.C.’s new Nationals baseball franchise and purchased 20 seats–yes,
in left field. The Washington Post had already planned to write about tickets
going on sale, and included a photo and interview of me.
Take me out to the ball game

Nationals super fans, “the D.C. Colonists,” organized direct action
for opening day. The Colonists are mostly members of the D.C. Statehood Green
Party (DCSGP) and some fired-up Democrats, sick of inaction in their own party,
to get equal rights-namely our votes in Congress and control of our tax dollars.

It was cold and grey on April 3, but Robert F. Kennedy Stadium was packed. Each
of the D.C. Colonists carried in a 3 x 2 foot flash card with a single letter on
it. Together 20 D.C. Colonists spelled out “Strike 4 D.C. Statehood,”
and on the reverse side, “Bush: Play Ball With D.C.” In all we created
a 120 square foot sign. After every strike-out we held up the signs and yelled,
“Strike for Statehood!”

Most of the 40,000 in attendance could read the signs and thousands more saw
them on two local TV stations. “Here’s one out of Left Field,” wrote
the Washington Post about the Green Party’s direct action at the first game of
D.C.’s new Nationals baseball franchise.

The Nationals may have lost their first game against the New York Mets, but our
action won the hearts and minds of those in attendance.

The D.C. Colonists are just the latest chapter in D.C.’s baseball saga. DCSGP
was in the forefront of opposition to public financing of a new sports palace
for the Nationals to play in three years from now. Mayor Tony “I never met
a CEO I didn’t like” Williams attracted major league baseball by offering
more than $560 million in public funds through new taxes.

According to public opinion polls, 69 percent of D.C. residents wanted a better
stadium finance deal that required baseball billionaires to build their own
stadium or just use the existing RFK Stadium.

Local Greens joined with community groups from all corners of the nation’s
capital to fight the deal. 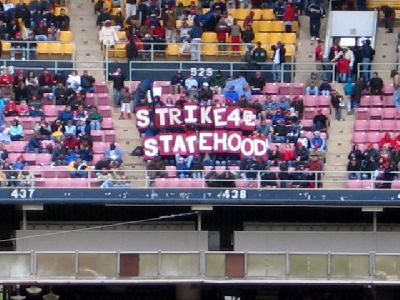 An undemocratic one-day hearing was held in our big-business-backed city
council. Hundreds of residents showed up and spoke against the stadium deal. The
same message could be heard over and over again: “Go back and make a better
deal.” But the council really didn’t listen until something unplanned blew
the issue up.

The battle over stadium financing erupted on the national stage in November
when this Statehood Green disrupted a carefully orchestrated press event at
Union Station intended to announce the team’s name. Just moments before the
event began, I nonchalantly walked onto the unsecured stage before D.C.’s
political, business and media luminaries.

Standing at the podium, I told the crowd: “This is a bad deal for D.C. It’s
a rip off and everyone knows it!”

Within a few seconds baseball flacks rushed the stage to grab me. Soon after,
Councilmember Harold Brazil and security guards joined in the tug of war to get
me off the stage-but I held my ground for over a minute.

While four people tried to pull me off the stage, I stayed put, holding onto
the podium chanting, “Human need, not corporate greed!” Meanwhile
about a dozen TV cameras and photographers shot all the excitement.

Eventually I was dragged off the stage. To my surprise I wasn’t arrested, just
told to stay away for the rest of the day. Meanwhile, a handful of stadium
opponents that were in the crowd were told by police to leave.

When longtime DCSGP Debbie Hanrahan refused to show ID outside Union Station,
she was arrested and spent the next 36 hours in jail. Later the charge against
her of “Failure to Show Identification” was dropped. She is now
pursing civil rights litigation against the police.
The Colonist goes national

That evening the disruption story was broadcast on every local station and more
than 200 TV stations nationwide, including many sports programs that rarely
discuss the merits of publicly financed stadium deals.

This single disruptive outcry resulted in the baseball deal being held up for
three weeks before a new deal was struck to explore private financing of 50
percent of the new stadium costs. Now there are six private financing deals
under consideration which could save the city as much as $250 million.

Playing to the media

Joking aside, just showing up at major media events in your community and
bringing the Green message is usually a surefire way to get media coverage from
something that is already news with or without you.

In our case we wanted to link the first baseball game in D.C. in over 30 years
to the struggle for D.C. Statehood. So what did D.C. Statehood have to do with
baseball? Nothing really, but that doesn’t matter in today’s media market, where
creativity is more important than substance, and when media events are scripted
weeks or months in advance. I’ve learned over the years that the solution to
getting your piece of mainstream media coverage is to write yourself into their
script.

Post Title: I am featured in the Green Party’s “Green Pages”
Posted in: Activism, Colonist, Green Party, In The News