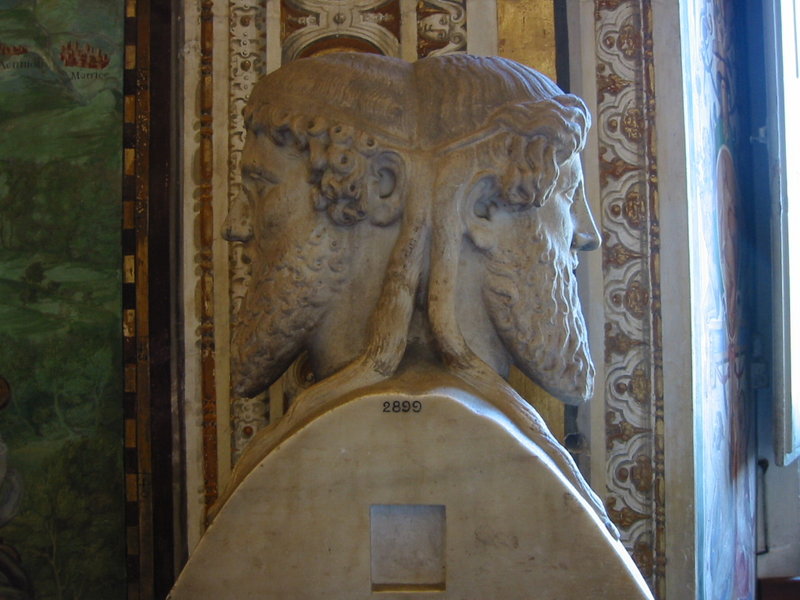 So after looking at my last two renderings, I realized they looked like the two-faced Roman God Janus. I went over to Wikipedia and looked up Janus…

this is the current entry:

In Roman mythology, Janus was the god of gates, doors, doorways, beginnings, and endings. His most apparant remnant in modern culture is his namesake, the month of January. Though he was usually depicted with two faces looking in opposite directions (Janus Geminus (twin Janus) or Bifrons), in some places he was Janus Quadrifrons (the four-faced). The Romans associated Janus with the Etruscan deity Ani.

Janus was frequently used to symbolize change and transitions such as the progression of past to future, of one condition to another, of one vision to another, and of one universe to another. Hence, Janus was worshipped at the beginnings of the harvest and planting times, as well as marriages, births and other beginnings. He was representative of the middle ground between barbarity and civilization, rural country and urban cities, and youth and adulthood.

Janus was supposed to have come from Thessaly in Greece and shared a kingdom with Camese in Latium. They had many children, including Tiberinus. Janus and his later wife, Juturna, were the parents of Fontus. Another wife was named Jana. Historically, however, he was one of the few Roman gods who had no ready made Greek counterpart, or analogous mythology.

As the sole ruler of Latium, Janus heralded the Golden Age, introducing money, laws and agriculture (making him a culture hero).

When Romulus and his men kidnapped the women of the Sabines, Janus caused a hot spring to erupt, causing the would-be attackers to flee. In honor of this, the doors to his temples were kept open during war so that he could easily intervene. The doors and gates were closed during peace.

Now what is weird, is my desire to name these recent renderings, the “Janus Series,” like the Star Series, Memory Series, Mother Earth Series, etc.

I googled “Janus Series” to see who else has used that two word phrase, and the first result (I’m feeling lucky) came with a result of…. Johannes Kepler’s The Secret of the Universe (Janus Series)

After doing a search for The Secret of the Universe Johannes Kepler scrolling down the page I find a mention of the book on, of all places, the Schiller Institute website. I didn’t even know this “institute” existed…..and it’s based here in Washington, DC!

Today is Columbus Day and it’s also my birthday– I live in a district named after him and today we are sharing the celebration of the day together. I am worried that his karma might get out of hand tho- 513 years is a long time. We’ll see!