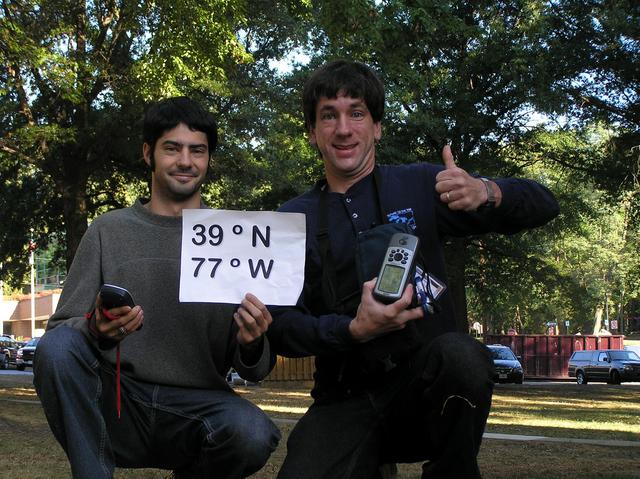 Earlier this month on October 1st, 2005, my colleague from the USGS, Joseph Kerski took me to my first confluence at 39 degrees North and 77 degrees West (not far from Silver Spring, MD).

This is his report:

01-Oct-2005 — I was in Washington DC for an GIS advisory board meeting for the National Institute for Technology in Liberal Education, an initiative to bring spatial thinking to 93 liberal arts colleges around the country. A confluence visit seemed like the perfect complement to this meeting. Even more fitting, I reasoned, would be to contact one of the finest geographers I know, Nikolas Schiller from the Association of American Geographers. Nikolas had readily assented to the trek a few days prior, and I met him at 8:00 am not far from the AAG headquarters. As a token of goodwill to make up for a rental car that was stalled, I had been given a rental car with an in-vehicle GPS with voice. It was highly enjoyable to try its features.

Soon we were driving northward out of Washington DC up Georgia and New Hampshire Avenues. I expressed my disappointment that there were no “Welcome to Maryland” signs, but Nikolas, trained to pick up such clues, assured me that we were indeed in Maryland. We turned north-northwest on Maryland State Highway 193, and west on Piney Branch Road. We immediately recognized the Flower Branch apartment buildings from the prior visitors’ photographs, and parked near the Giant Food Store on Arliss Street. We walked a few hundred meters east, arriving at 840am, and soon felt quite “centered.”

We determined that the confluence of 39 North 77 West lies a few meters to the east of the west wall, inside the apartment building at 8662 Piney Branch Road. We took the photographs and video at the closest outside point, which lies on ground planted with grass and sloping about 10 degrees to the north. It was a beautiful early autumn morning, with the thermometer on my GPS bag showing 15 C (59 F). We had a bit of difficulty getting the GPS receiver to stabilize at the point closest to .00000 and .00000 due to the close proximity of the building and the high Maryland tree cover. Nikolas remarked that marking the point winter, with the leaves off the trees, would have been easier. Nevertheless, we enjoyed the 20 minutes we spent on the site, speculating, as geographers are wont to do, how the area had changed in the past generation and what changes it might see in the future. On our way out, past the Long Branch of the Montgomery County Library, we tried to name all 10 languages on the door, but were a bit embarassed to find out that we could not. The area is largely residential, with a few local businesses to support the area’s population. Some children lived in the apartment complex, and we spied a free couch waiting by the dumpster. The confluence lies due east and not far from the northernmost “points” that make up the boundary of Washington DC.

I could not help but think of the other times I have visited 39 North, in Colorado, Kansas, and Missouri. This was my first confluence in Maryland, and Nikolas’ first confluence. I had been to 77 West twice before, in Virginia and Pennsylvania. Fortunately for Planet Earth, only a few of the confluences I have visited were as heavily urbanized as this one–outside Chicago, in Columbus Ohio, and Atlanta Georgia. We departed, taking a short unplanned detour through some streets winding adjacent to small wooded creeks. In these bastions of nature, one almost can forget that one is in one of the most sprawling metropolitan areas of the world.

As a fitting end to our visit, Nikolas gave me a tour of the Association of American Geographers’ (AAG) building in downtown Washington DC. The AAG is one of the world’s largest organizations of geographers, founded in 1904. Perfect for the Degree Confluence Project, its building is named “Meridian Place.” Nikolas pointed out that it was named after the 0 degree meridian that Jefferson established along 16th Street. This street runs due north from The White House. All American maps showed this line as 0 Longitude for USA maps until 1884, when the international committee set it at Greenwich, England. If that had never happened, Nikolas and I would have stood in an entirely different spot this morning. History–and geography–does indeed affect our lives.

Here is an aerial photograph of the confluence taken in April of 2002: 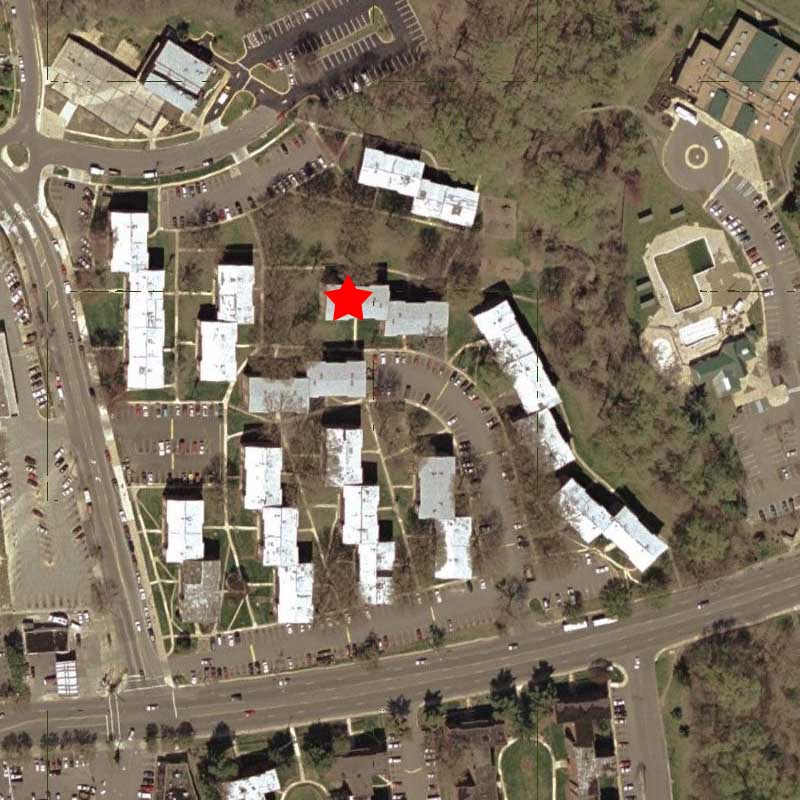