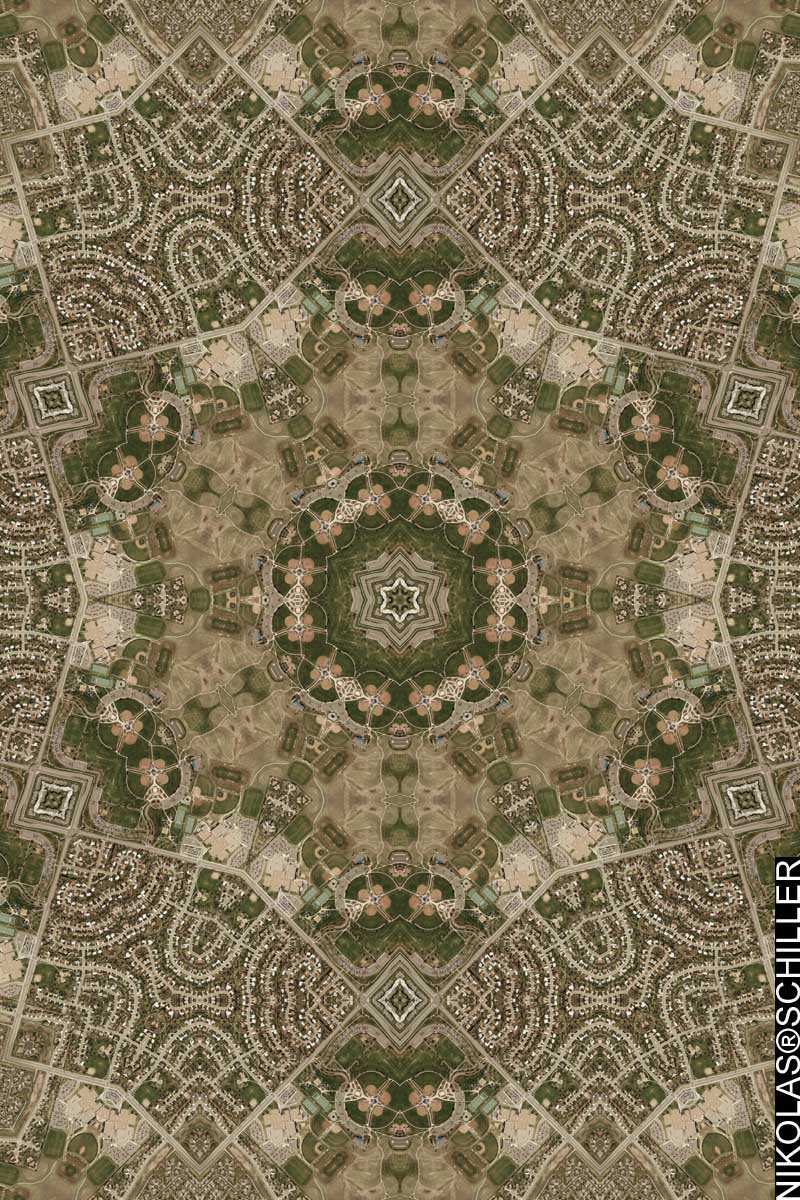 Today is the 8 year anniversary of the tragedy at Columbine High School in Littleton, Colorado. With what happened this week at Virginia Tech I felt that this map would be a way to honor those who passed away.

To this day I still remember sitting in math class watching it all unfold on TV in 1999. I remember seeing a friend of mine, who’s name I cannot recall, being interviewed on television. I had 10 friends from summer camp who were attending Columbine, but thankfully none were hurt.

Also related, but created unintentionally, are my two maps of Oklahoma City, where I inadvertently placed the Oklahoma City Memorial at the center of the maps. 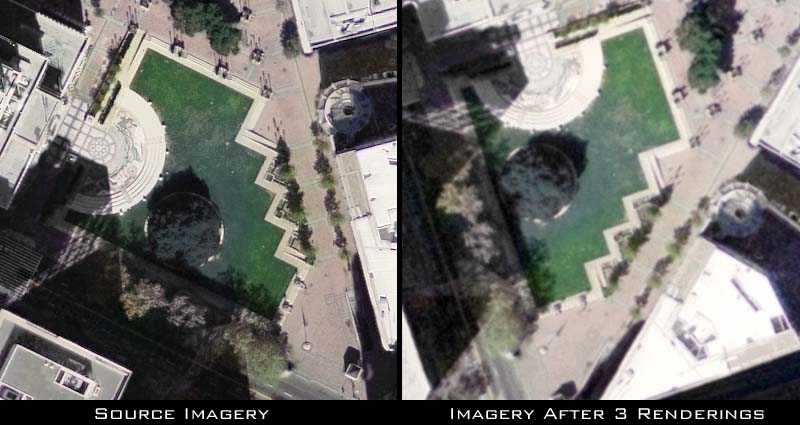 I decided to compare the unmodified imagery of Oakland’s City Hall Plaza with the same location after 3 derivative maps (specifically a detail from Oakland Quilt #5). The result is quite interesting because it shows that the template I’ve been using for almost a year is not 100% perfect, which I knew already, but never cared to quantatively find out.

First there is too much light because the imagery on the right is slightly brighter. I did not compare the RGB histograms to see exactly how bright it is, but will check out in the future. Secondly, and more importantly, the template ever-so-slightly over-projects the imagery. The visual result is a slightly fuzzy version of the original, which, in most cases, does not matter because it’s ONLY noticable when shown at it’s full size. Once the map is reduced in size the fuzziness goes away.

To discover this I placed the original imagery on top of the used imagery and changed the opacity so that I could line up park on top each other and to match them I had to stretch the original imagery about .03%. Which after being used for 3 maps, this means my current template over-projects the imagery approximately .01%. This isn’t all the bad, but it means I need to do a slight resize to the template. Technically this means each map is 180 pixels too large, but honestly, I find that number a bit too high…. 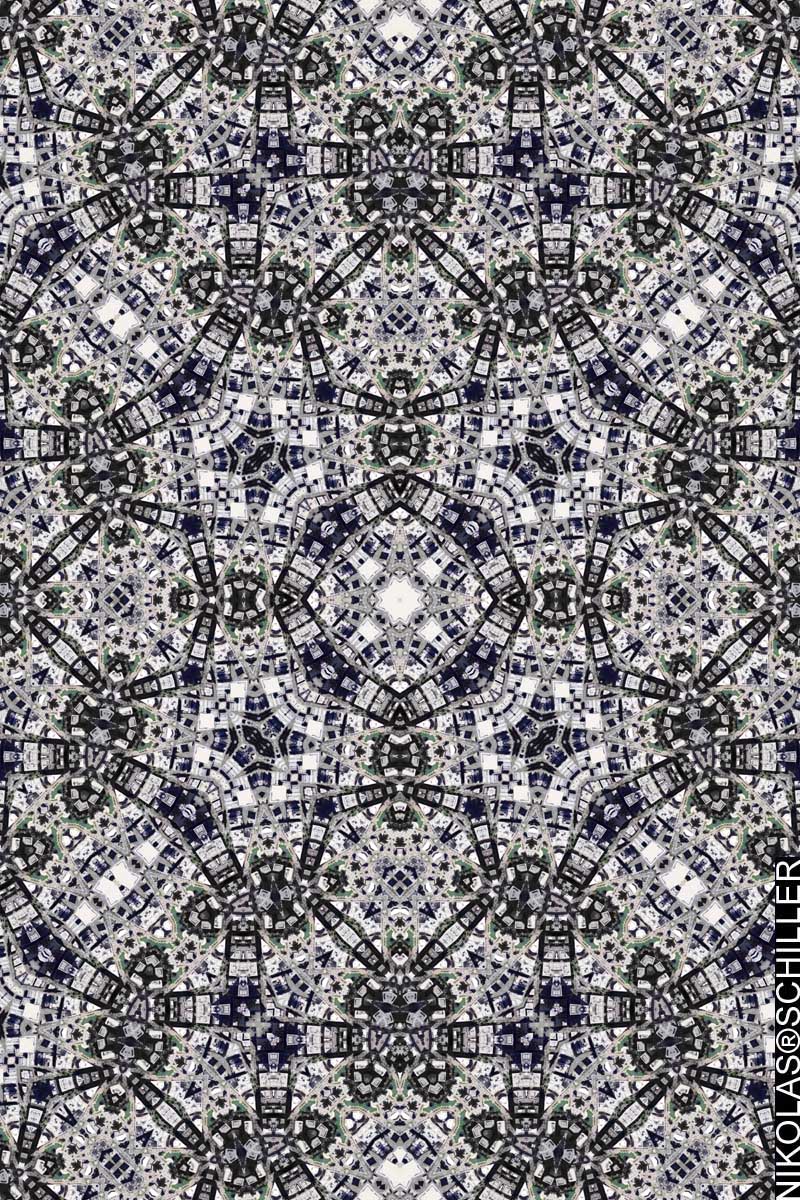 This map was created from a second derivative tessellation creatied by sampling this portion of Oakland Quilt #4. 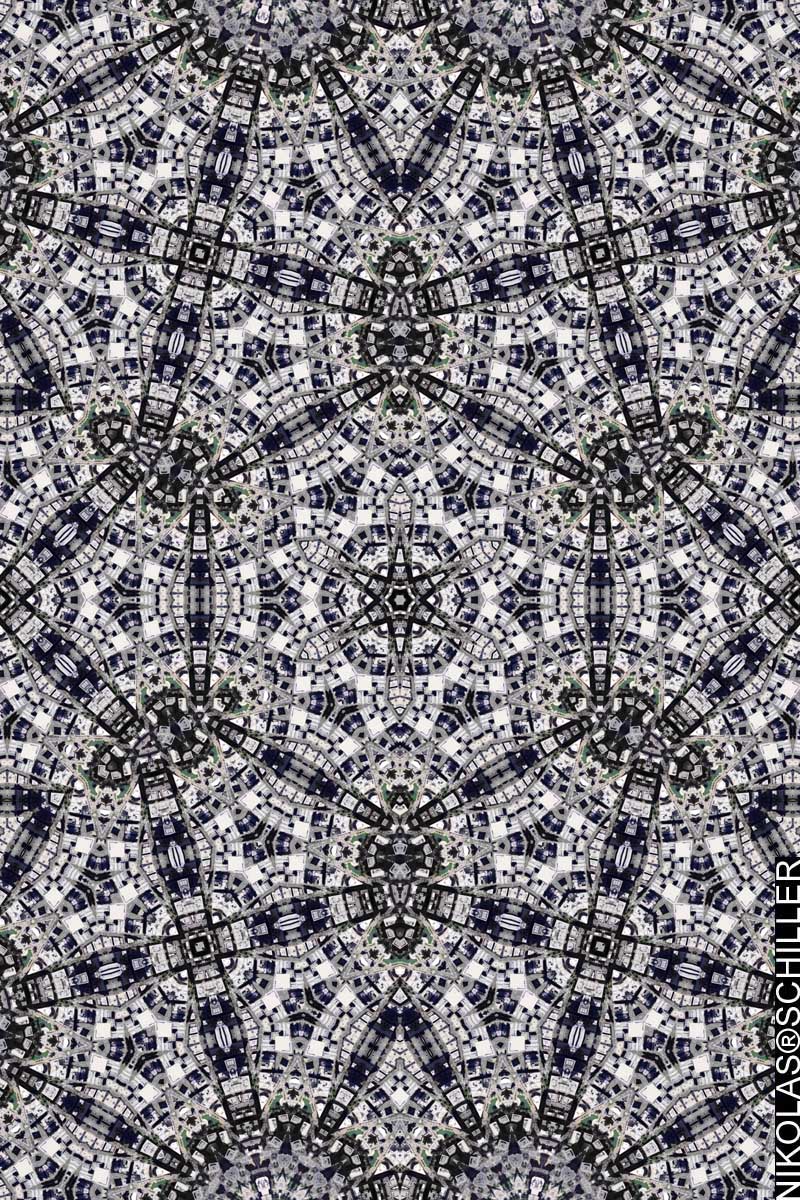 This map was created from a second derivative tessellation creatied by sampling this portion of Oakland Quilt #3. 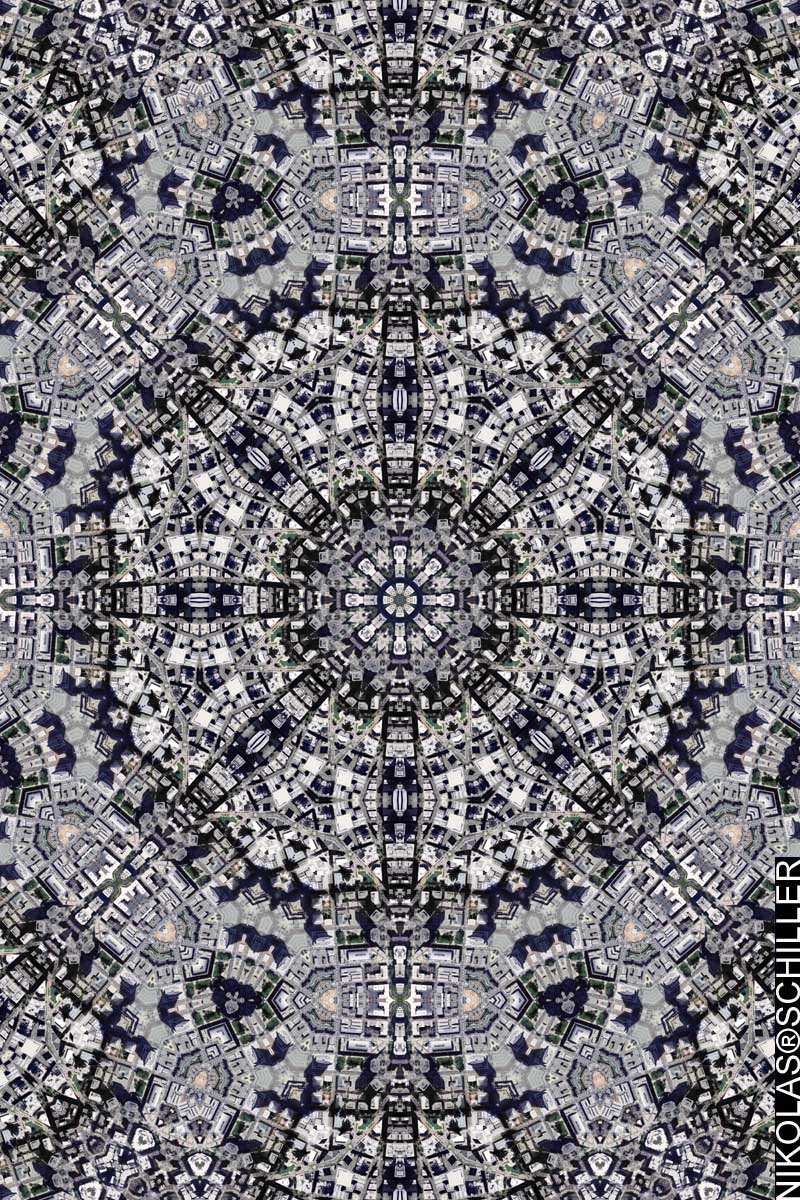 This map was created from a first derivative tessellation creatied by sampling this portion of Oakland Quilt #2. 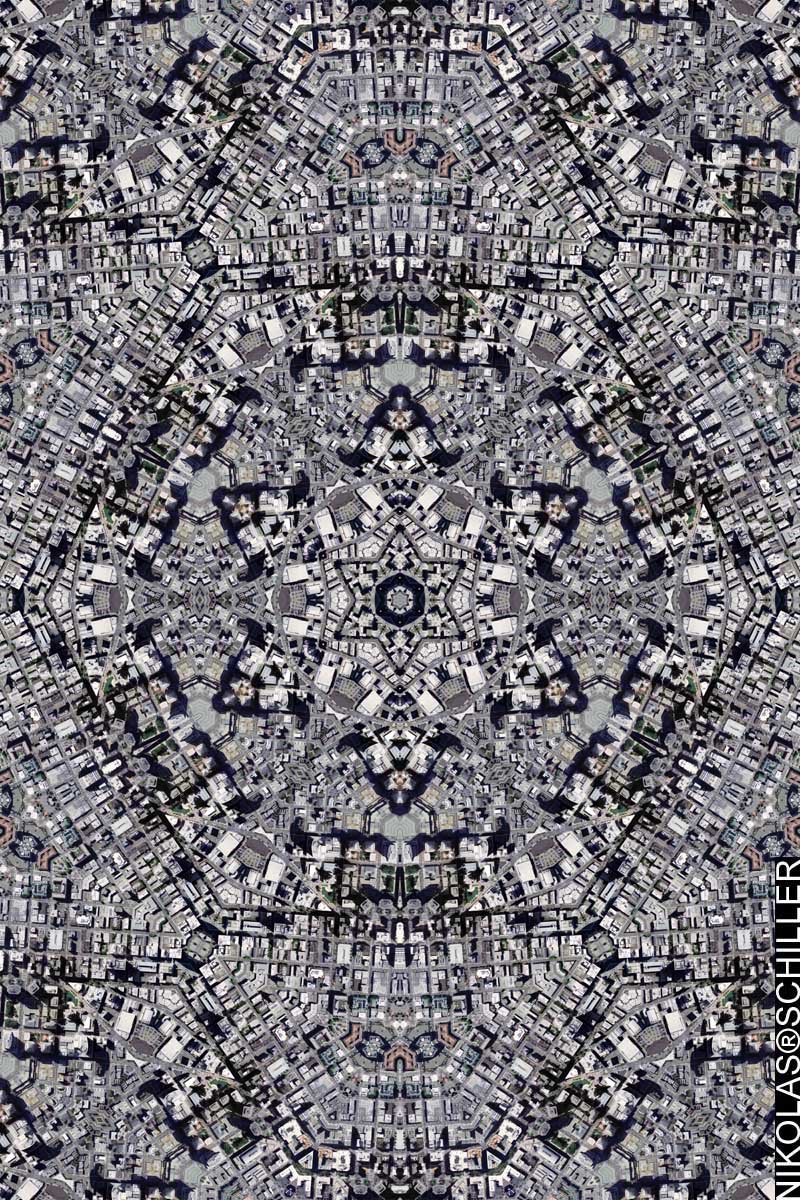 This map is also a hexagon quilt projection map like the first. The difference is that I used the other tessellation and I rotated it 90 degrees. 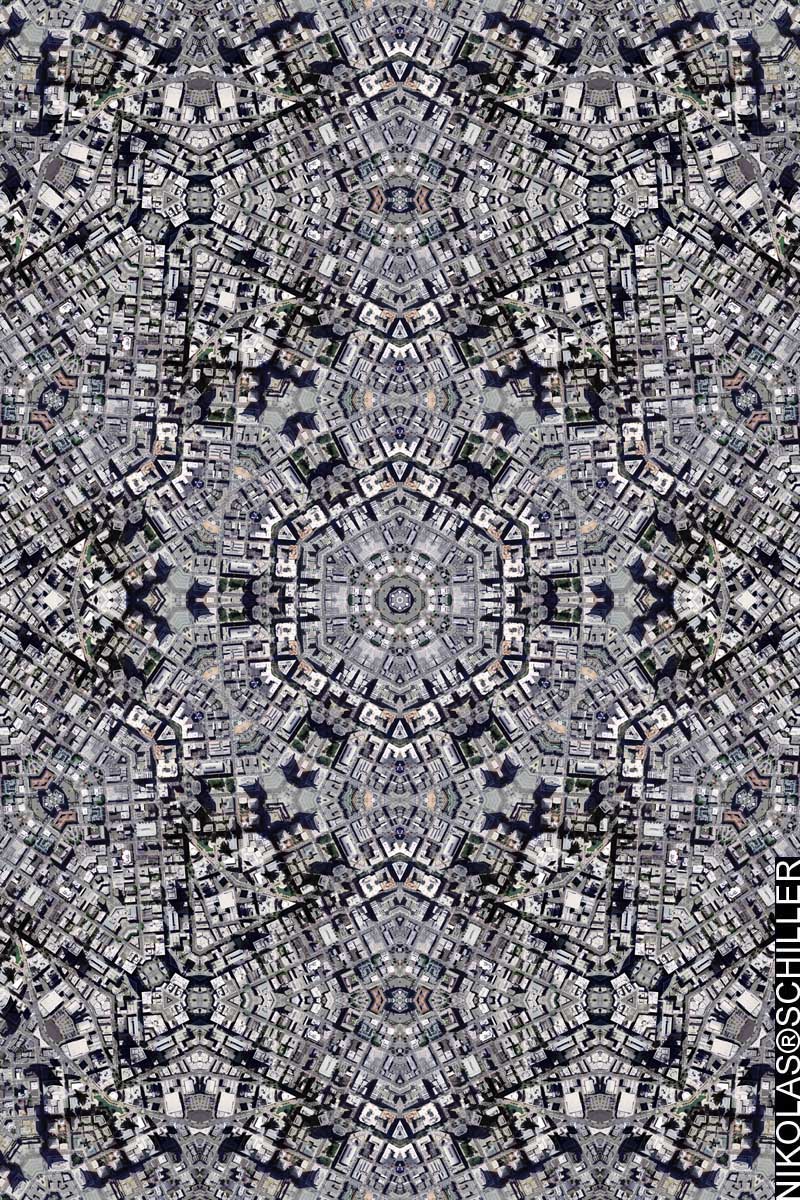 I decided to try to see how many maps I could make in one day. In the past when I made multiple maps of a specific geography I would post one each subsequent day, however I am now able to make maps a bit more quickly now, so I am going post the 4 I made yesterday/last night. Originally I made two different tessellatons of city center in Oakland, California. This map is the only on that features the first tessellation, and is the only map to use it. 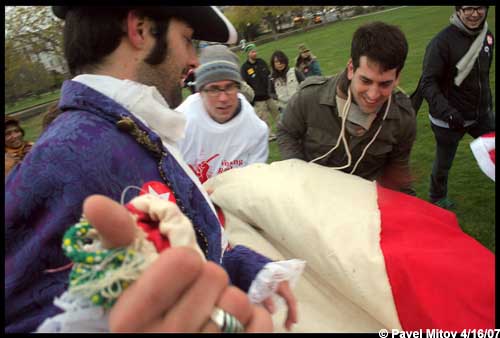 Read my recap, watch a video, & view the rest of the pictures I’ve obtained after the fold…
END_OF_DOCUMENT_TOKEN_TO_BE_REPLACED

This afternoon will be the largest organized march for D.C. congressional representation in over a decade. While its great news that there is enough popular support to have a march, it’s downright sad that the bill in which people are lobbying for is a complete sham. It gives D.C. a token vote in the House, and little else. Congress will still have full control of D.C. (as written in the Constitution) and there will still be no representation in the Senate.

As I have stated time & time again, if the bill passes, D.C. residents will only be 1/3 represented– so why advocate for partial representation? Democracy only works in whole numbers. History tells us this. Just like the slaves who were once considered 3/5’s of a human in regards to representation, which was found to be unconstitutional, this bill will probably end up with the same result.

I was going to publish the list of sponsors of the Voting Rights March to show high up the kool-aid drinking goes. From the NAACP to the DC Government, it’s laughable that these organizations are behind something so constitutionally dubious. Moreover, I must highlight the sad fact that they behind something that sells everyone short. As one person told me, “It’s the best thing going,” but does that make it legitmate? Politics may be the art of compromise, but why compromise becoming a full citizen over being 1/3 of a citizen?

I will be marching with the largest D.C. flag (made of hemp, with the text “DC STATEHOOD NOW!”) from Franklin Square to Freedom Plaza in the “March to Statehood” contingent and then after the march & rally I will be going to “Push the Senate Reception” in the Dirksen Senate Office Building. I was thinking of getting arrested in the senate, but I have yet to decide if it will be worthwhile or not. I’m a bit rusty when it comes to civil disobedience, it’s been awhile.

Lastly, I’d like to point out the stupidity of the naming of the march as a “Voting Rights March.” People are lobbying for a voting RIGHT – thats singular – not plural, with the right being only one vote in the House. If it were really about voting RIGHTS – that’s plural – it would be in support of full representation in both the House & Senate….

Below the fold is Reuters story,
“Washington, after 200 years, may get vote in Congress”
END_OF_DOCUMENT_TOKEN_TO_BE_REPLACED