WITHIN SIGHT OF THE WHITE HOUSE

Section of Washington, D.C., Known as “Hooker’s Division,” Which Contains 50 Saloons and 109 Bawdy-Houses
— List of 61 Places Where Liquor Is Sold With Government But Without City Licenses. 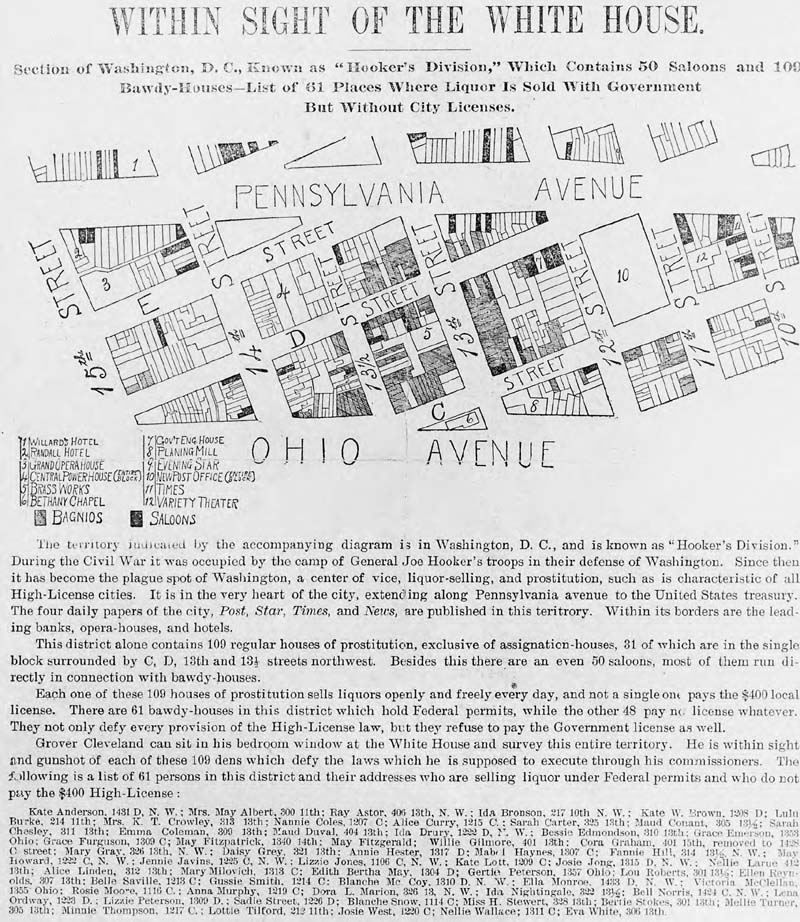 The territory indicated by the accompanying diagram is in Washington, D. C., and is known as “Hooker’s Division.” During the the Civil War it was occupied by the camp of General Joe Hooker’s troops in their defense of Washington. Since then it has become the plague spot of Washington, a center of vice, liquor selling, and prostitution, such as is characteristic of all High-License cities. It is in the very heart of the city, extending along Pennsylvania avenue to the United States treasury. The four daily papers of the cit, Post, Star, Times, and News, are published in this territory. Within its borders are the leading banks, opera-houses, and hotels.

This district alone contains 109 regular houses of prostitution, exclusive of assignation-houses, 31 of which are in the single block surrounded by C, D, 13th, and 13 1/2 streets northwest. Besides this there are an even 50 saloons, most of them run directly in connection with bawdy-houses.

Each one of these 109 houses of prostitution sells liquors opening and freely every day, and not a single on pays the $400 local license. There are 61 bawdy-houses in the district which hold Federal permits, while the other 48 pay no license whatever. They no only defy every provision of the High-License law, but they refuse to pay the Government license as well.

Grover Cleveland can sit in his bedroom window at the White House and survey this entire territory. He is within sight and gunshot of each of these 109 dens which defy the laws which he is supposed to execute through his commissioners. The following is a list of 61 persons in this district and their addresses who are selling liquor under Federal permits and who do not pay the $400 High-License.

Courtesy of the Geography & Mapping Division of the Library of Congress