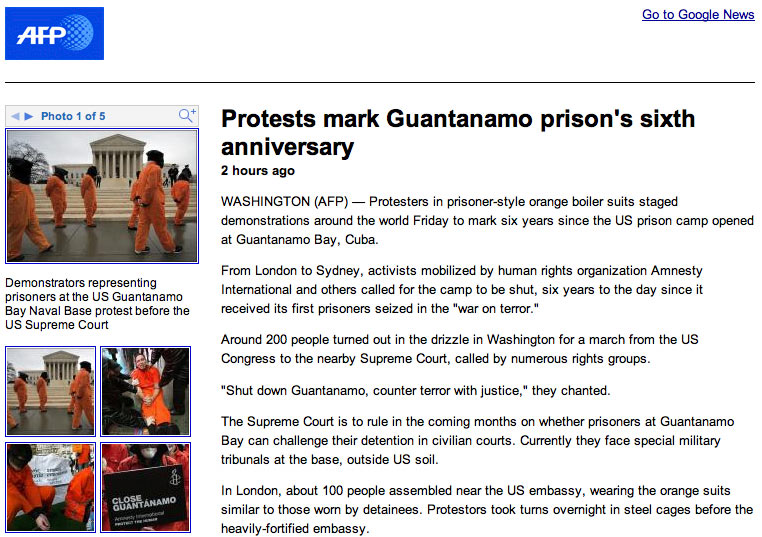 Screen Grab from the AFP via Google News

I was contracted by Pax Christi, a catholic workers group, to provide sound for a demonstration at the Supreme Court on Friday. It was the 6th anniversary of America’s illegal detention camp at Guantanamo Bay, Cuba. 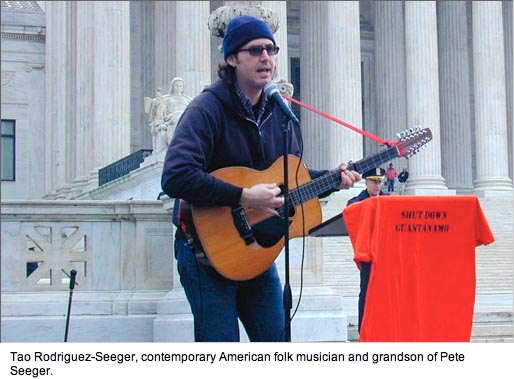 I did sound for last year’s protest as well. I remember that date vividly (even though I did not blog about it) because it was the first date that I used the newly purchased multbox, and every single plug was used [aka a lot of media present]. And more importantly, how the National Park Police refused to let us set up on the Pennsylvania sidewalk, even though we had permits (just not the right permits). I also remember that quite a few activists managed to gain entry to courthouse and caused quite a stir. 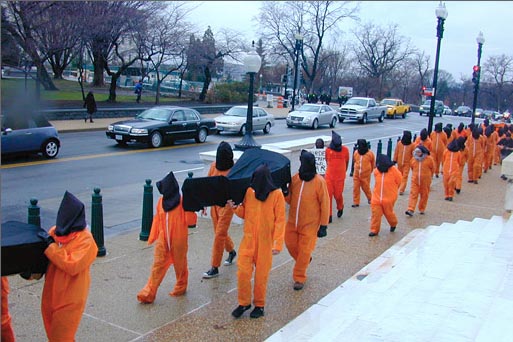 This year the somber anniversary fell on a grey, rainy morning. We were originally going to bring two speakers to setup on the sidewalk in front of the Supreme Court, but since the rain was coming down so heavily, we opted to bring one speaker. The clients rented out a riser from a nearby store in Capital Hill and for the first time in a very long time I was never asked for permits when setting up the sound system. In fact, I was never approached once by any authority figure during the entire demonstration, nor was there a bomb dog brought out to inspect the 5’x5′ riser, or my sound equipment. Its probably because it was so rainy out, but I am glad the demonstration was hassle free on my end.

The organization’s permits granted them a march from the National Mall up to the Supreme Court. As they approached the area where we were set up the sound system, the rain stopped completely. As the sun was broke through the clouds, the U.S. Capitol building became illuminated off in the distance, and a sea of hooded, detainees walked before me and began to make kneel in rows at steps. The musician that had been invited to play sang one of the most beautiful rendition of Guantamera I’ve ever heard. 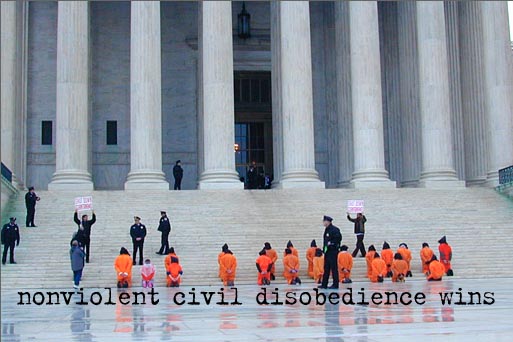 There is a fine line when it comes to the Supreme Court where you are on the sidewalk and when you are trespassing. The first set of steps next to the sidewalk in front of the Supreme Court is the line of demarcation where one can choose to break the law in an act of civil disobedience or remain an active participant in the demonstration. As the all the detainees assembled in the “permitted protest zone” a man in combat gear would yell loud epithets at the detainees in an attempt to humiliate and deride their existence and eventually he called the detainees to raise.

What the AFP wire photographs do not show is activists who chose to get arrested by making their way to the actual steps of the Supreme Court building. About 30 in all, they lined up at the steps and knelt supplicant before Justice. One by one they were arrested as heartfelt poetry written by the Guantanamo detainees was read aloud on the soundsystem. I found it to be rather moving.

After those who chose to get arrested were removed from the front steps of the Supreme Court the demonstration was adjourned. But not before someone was waterboarded. In all, I’d say there was at least 100 activists dressed in the orange jumpsuits, followed by another 200 other people holding signs and wet cardboard coffins, 15 members of the media, and quite a few of curious tourists. 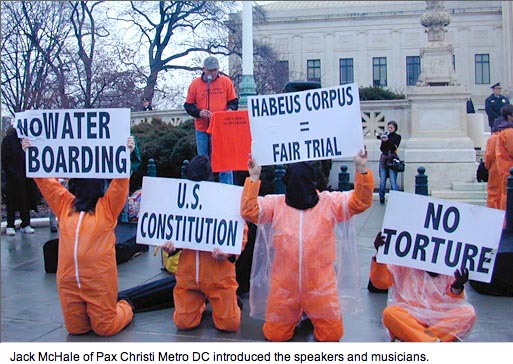 My friend and comedienne Elizabeth Croydon came dressed wearing the kitschy C.I.A. cap [if you’ve been to DC, its one of the tacky souvenirs peddled to tourists] and her friend who dressed in a trench-coat spent most of the time filming the police with his digital camera. One I time I watched him humorously follow a police officer paparazzi style. As we were packing up the sound system and bringing it to the curb, I noticed that there were 6 undercover, plainclothes police officers standing right next to the equipment chatting. As I took the last load to the curb, I motioned to Elizabeth that the people near me were undercover officers. She jabs her friend in the ribs, and makes her way over to the plainclothes police officers and poses for a picture. It was classic. Her C.I.A. cap with the plainclothes U.S. Capitol Police was probably one of the funniest sights I’ve seen in a long time. As her friend continued to film them and they realized that they had been outed, they started to disperse as fast as they could. One of them walked around to the other side of the car, another put his hoodie on it. I can’t wait to see the footage he got!

Regardless of the fun I had yesterday, I sincerely hope that I don’t have to come out to the steps of the Supreme Court next year for the same issue. It’s a disgrace.