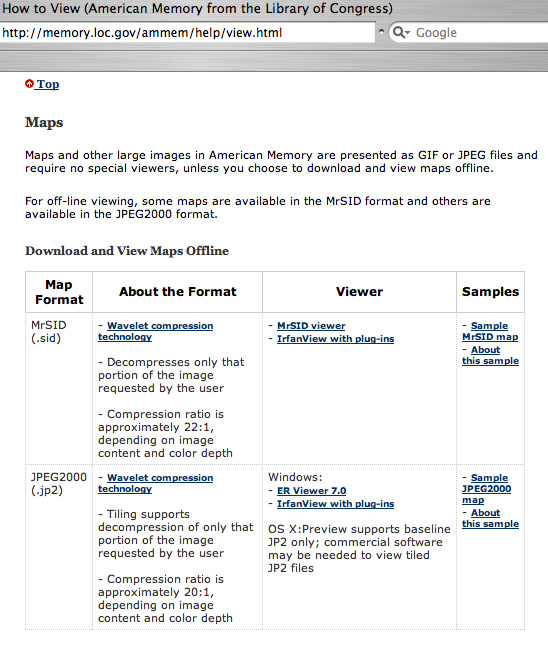 Screen grab from the Library of Congress which DOES NOT list Graphic Converter as an option…. yet?

For the last few years I’ve found the file format Mr. SID to be the bane of my cartographic explorations. When I’d see a map available in the MultiResolution Seamless Image Database format, it meant I’d have to keep looking for other maps. Conversion of the Mr.SID format on a Macintosh had kept the maps locked away in an obscure file format; smiting me.

In my opinion, one of the worst decisions that the Library of Congress made was the choice to use the Mr.SID file format for their on-line maps. First off, its a proprietary compression algorithm patented by a company that is motivated by profit, not by the intent of furthering academic research. This means that any software maker originally had to get a license (pay) to use it. This resulted in only a few programs being written that can convert the file type. Worse is that there are even fewer Macintosh-based programs that can convert these files. The patent owner’s website offers only one Macintosh product and does not allow the rendering of the map at it’s full size. As in, I could only export sections of the original map, which makes the reader useless. Secondly, the file type is in itself “an American Memory,” because its not widely used anymore. It made sense to use it originally- it saved server space because of the high compression algorithm, but now server space is relatively cheap. Today only people who use high-end GIS software use Mr.SID formated imagery, and since most of this software only exists on PCs, there has been little cross platform support. Lastly, for any maps to be used by an image editing program, the map must first be converted out of the Mr.SID format and converted into another filetype (.jpg, tiff, etc.). This means that for every map that is available on the Library of Congress website, I have to spend 15 minutes converting it to a useful format.

Over the weekend I discovered that there is *one* program for Macintosh that can convert this file type: Graphic Converter. I also discovered that the newsest version (the Universal Binary, which I downloaded last summer) did not handle Mr.SID. Instead, I had to download an obsolete version (Graphic Converter for PowerPC) to convert this arcane format! So for the last 7 months I had been unable to convert any Mr.SID formatted map, but now I can, and I’m very excited about the new possibilities this opens up (literally hundreds of maps are now within virtual reach! The Library is only a few blocks away, but the digitalization is just as important.). 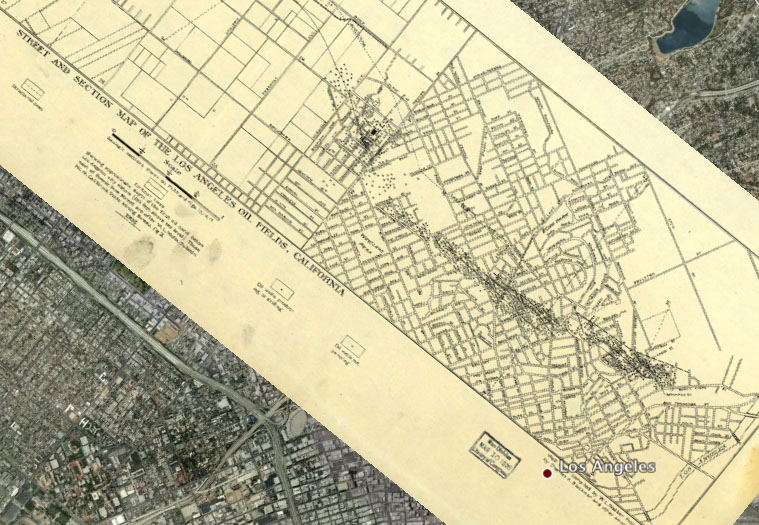 For more information about this antique map, visit the Library of Congress website. Below is a secondary screen grab showing the area around Dodgers Stadium. It should be noted that the overlay does line up 100% on Google Earth, but close enough to show a change in the built environment.
END_OF_DOCUMENT_TOKEN_TO_BE_REPLACED 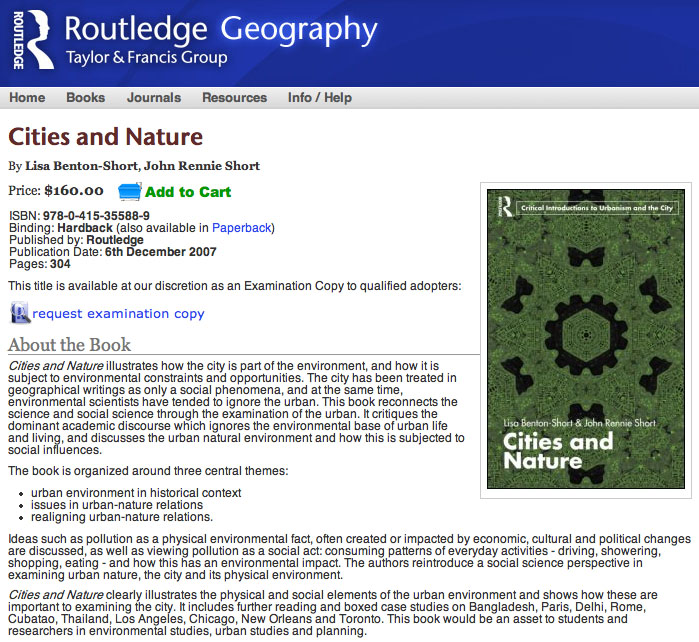 I look forward to seeing my copy when it arrives! The book cover uses my map of Central Park in New York City. From the screen grab above, the final design looks a bit greener than the original map, but I won’t know until I see my copy. Regardless, I genuinely look forward to reading it instead of fussing over the colors. What’s inside is what counts!

A couple weeks ago I found this map and laughed. The “dude” looks just like this person. The color in the map above has been inverted and I added a citation and a linkback to the original. The animated version of the map, “If I Ruled The World” is quite funny as well.

Since my website is coded uniquely, I have developed a means to find new incoming links. A couple weeks ago I was linked from a popular architecture blog “Archidose,” and today finds me linked from one of the finest universities in the world, the University of Cambridge. Next year the university will be celebrating it’s 800th year of educating the future.

Typographically, I like how Geospatial Art is oneword. I own www.GeospatialArt.com, but the author did not link to that URL, so it reads odd that the words have been concatenated. Regardless, but equally entertaining, is that Postmodern Art is still #5 or so.

Related In The News Entries: END_OF_DOCUMENT_TOKEN_TO_BE_REPLACED

I ended up taking a longer break than I originally intended so I’m going to do add a few entries that I missed in the last week or so.

Before the year ended I sent out a mass e-mail with some these 2007 stats:

I don’t have any Quilt Projection maps in the pipeline at the moment, but I’ve been working on a few other projects.