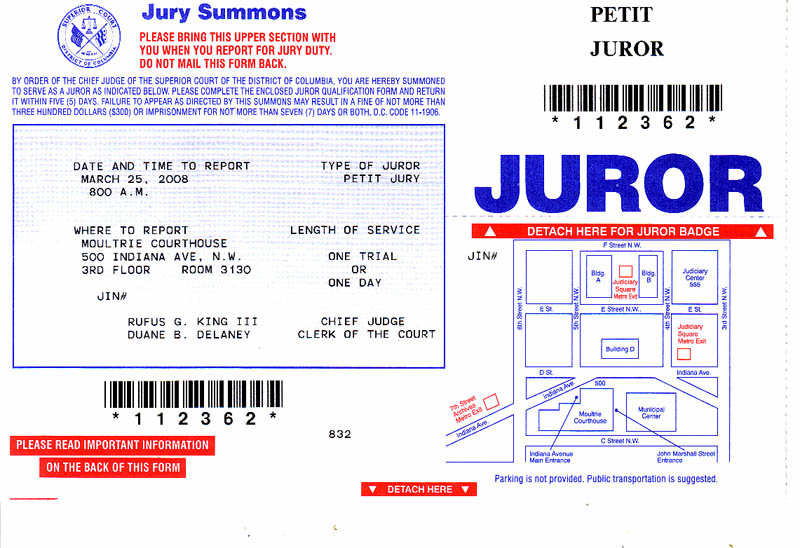 I arrived at 8am this morning at the Moultrie Courthouse for my first jury summons. I’ve heard only negative opinions regarding this important civic duty, so when I arrived to the third floor to a 40-foot long check-in line, I paused to realize that its probably like this every day for the government employees who work with jurors.

After the 15 minute wait, I gave my ID to the attendant, whereupon she uttered the most courteously curt instructions concerning the information in the pile of documents she had just handed to me. I smiled again knowing that she had said that a couple dozen times already today and was going to give that same rote monologue dozens more times today, tomorrow, ad nauseum.

The jury lounge where we were directed to sit and wait until the start of jury selection looked as if it had been the exact same jury lounge for at least a decade or more. A cross between a doctors office and a lecture hall, the lounge featured rows of synthetic leather chairs, multiple analog TVs hanging from the ceiling, the podium featuring the crest of the DC judicial system, and one ugly piece of artwork. And frankly, that piece of artwork is why I am writing today.

The Moultrie Courthouse is an interesting building. Its composed of an open-air central atrium that consists of elevators zig-zagging up five floors; from the basement to the fourth floor. Designed in the early 1970s and finished in 1976, its form works quite closely with it’s function— that’s of course if you consider a courthouse to be the building of broken dreams and perpetual apprehension.

Essentially, the courthouse is void of internal beauty. There is no artwork to be found. Just sterile granite, marble, brass, glass, and a few names engraved on the wall. No way of saying the law is a beautiful thing to respect. No concept that simple changes in the interior environment can lend itself to positive conduct of the inhabitants (lone exception: the sepia-toned, pixilated printout of kids hastily hung outside the jurors office). No visual means to say the like art, the law is as malleable as the definitions of words used to construct civil discourse. Maybe that is how the designers intended, but I find it visually bankrupt.

The introductory video was did it for me. As I sat watching the video, doing my best to attempt to place a date of the film’s creation (best guess: 1990), I noticed that the man in the video was speaking in front of the EXACT SAME piece of art on the wall. A piece of art that is abstract, but evokes very little toward the concept of justice or even peace. I even noticed an slight procedural error in the film itself– in the first section jurors are told to return to the Jurors office after being dismissed from a trial and in a later section, if my memory serves me, the jurors are told to return to the jury lounge. A discrepancy that would make jurors not appear to be not waiting in the lounge. I’ll have to get picked to serve jury duty again to watch that video again. However, judging by the quality of the VHS tape, I am not sure if it will last another 1,460 screenings (365 X 2 years x 2 times a day~~ based on selection of jury duty every two years). Hopefully not as well– the film could easily be re-shot, with better editing, and more information from the employees related to common questions that have been asked by jurors over the years.

Luckily, my jury duty experience lasted only the morning. I was brought in to a courtroom for a land use case and when I was asked by the judge about my knowledge related to the case, I furtively explained some of the development work I have been working on over the last year or so. After the judge interviewed about half of the potential jurors, he dismissed the other half and there were about 15 people left. I was the last to be dismissed along with another gentleman and a woman. After returning back to the lounge I was called to the jurors office and released for the day.

Yet seeing this dated system of design and juror interaction made me realize that there is a system in place, and this system has been in place for years and very little has been done to make the system work better. Or possibly there has been little feedback from jurors as to how to make the system work better for everyone. Or worse, the feedback is not acted upon. If its broke, don’t fix it. But, if axle is squeaking, try adding some oil? I also plan on bringing some magazines to place in the racks for people to read. I think that might be the best contribution of all. Nay, seeing artwork from DC residents selected from the DC Government’s Art Bank would be ideal. There is ample space for dozens of pieces to be hung throughout the building and it will make the overall experience more pleasant for jurors, judges, defendants, plaintiffs, and employees. By using the DC government’s Art Bank its downright impossible for the building to remain visually bankrupt as it was today. Of course, that is not to say that there weren’t some beautiful people in all shapes and sizes to gaze upon, but staring at artwork is far better than staring at a stranger. A little less awkward too….