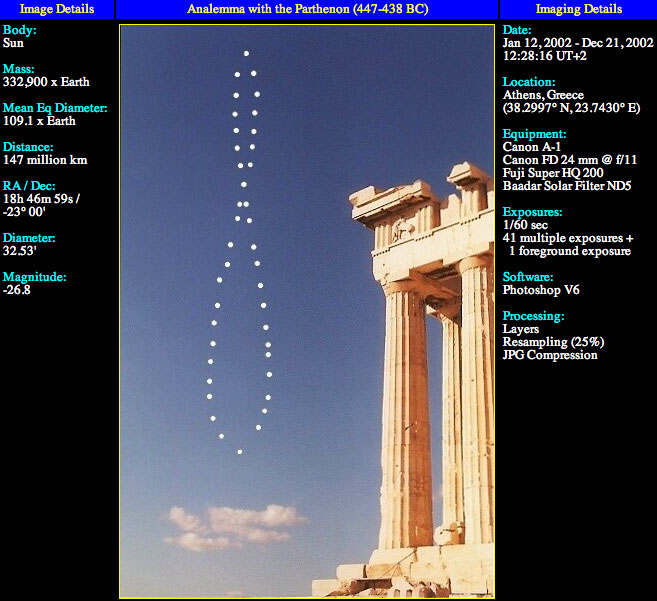 Following up on my antique sundials posting, I just came across this stunning photography by Anthony Ayiomamitis that shows the sun’s yearly orbit seen from a stationary points around various ancient ruins in Greece. The figure 8 design that the sun creates is called an Analemma. It’s a curve representing the angular offset of the sun from its mean position on the celestial sphere as viewed from Earth. The sun’s position in the figure 8 varies by geography and time of year, but when a series of photographs are taken from one location you can see the sun’s relative path through the seasons.

The vertical component of the analemma is the declination, or how far north or south from the equator an observer sees the sun directly overhead. The horizontal component is the equation of time, or the difference between solar time and local mean time. This can be interpreted as how “fast” or “slow” the sun is compared to clock time.

If I had the time, patience, and nice camera, I would love to take a series of photographs from my rooftop with the Washington Monument in the background, but I don’t think the relative location of my house would allow for the photograph to be taken. Facing south, the sun and the monument do not align within a camera frame unless a fisheye lens is used. Instead it would be fun to have a special installation made on the National Mall in some innocuous place that would take photographs throughout the year. The result would be a great poster that could be sold in the gift shop.