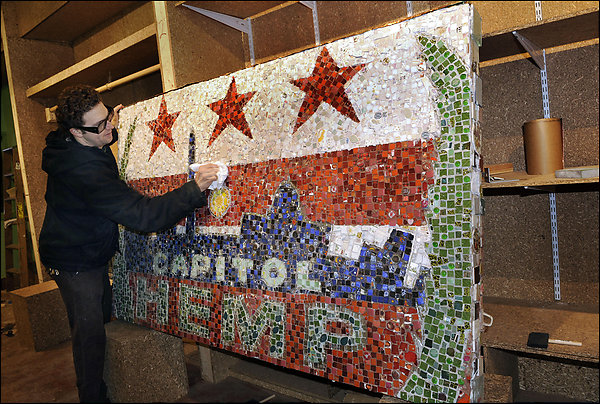 Photograph by Gerald Martineau of The Washington Post. Mosaic by Jill Blankespoor

I’ve known about the store for some time now so it’s nice that it’s is getting some great exposure in today’s Washington Post article. The store is located near the intersection of 18th & Columbia NW below the Starbucks and should open soon. I’ve written about my antics & activism with. Adam over the years- from working on his last campaign for U.S. Shadow Representative to staging the first ever DC democracy lobbying effort on the Potomac and I’m looking forward to shopping at Capitol Hemp.

Like most social change, the District’s first all-hemp emporium arose from years of complaining.

His complaint: “We’re the last major metropolitan area in the U.S. that doesn’t have a hemp store.”

Determined to see Washington join places like New York, Boston and even Burlington, Vt., Eidinger decided to open his own store, Capitol Hemp.

Until now, Eidinger has not been known as a businessman but as a spokesman for antiwar activists, stadium protesters, angry bicyclists and people who frequent natural-food stores.

Capitol Hemp grew out of his work for Vote Hemp, a District-based group devoted to lifting restrictions on hemp farming. (Hemp is legal to import into the United States but cannot legally be grown here.) He found that a lot of people still confuse the industrial variety of cannabis with the recreational variety. By showcasing hemp clothing, shoes and food, Eidinger said he hopes to dispel misconceptions about hemp.

Eidinger and a partner are leasing a basement retail space in Adams Morgan close to the main neighborhood axis of 18th Street and Columbia Road NW. They have begun painting the walls green and installing display shelves made from hemp board ordered from California.

The finishing touch will be a mosaic featuring the District skyline surrounded by cannabis leaves.

Lest anyone get the wrong idea, Eidinger is quick to say that Capitol Hemp is “not a store where you can purchase cannabis so you can get high.”

The rookie entrepreneur was initially reticent about the venture because the city has not sent him the certificate of occupancy he needs to open the store later this month.

But the polemicist in him eventually won out.

“We’ve been denied too long,” he said.

The mosaic in the photograph above was created by my old friend and former housemate, Jill Blankenspoor. In 2005 Jill, myself, and quite a few of our friends created a 30 foot mosaic in Anacostia at the corner of 13th and Good Hope Road. I should have those old photos of the mosaic on-line soon.