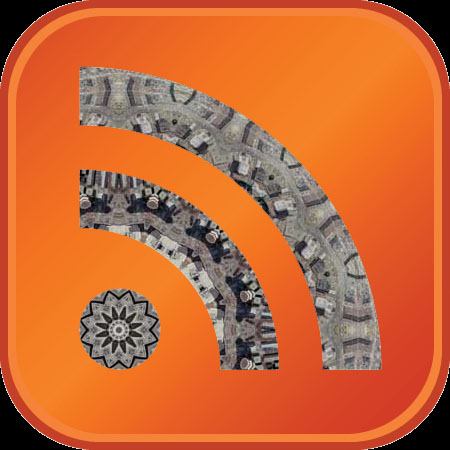 Image above links to this blog’s main RSS feed

About a year ago I came up with the idea of making a large scale rendering that uses the iconic RSS logo as a texture on a very large and creepy monster. He’d be a cross between overt information consumption and the plant from Little Shop of Horrors. Below him would be the caption “FEED ME!!!.”

Instead of going that route, I’ve simply modified a large RSS graphic I found on-line and replaced the white space with one of my previously made maps. I’ve been debating on whether I should expand this concept and make a string of these graphics like I did for the randomly selected banner graphics (see banner above and/or hit reload). For now I’m going to stick with the first design I created, which uses imagery from Boston Financial District Quilt.

In homage of the to-be-created RSS Monster, here’s a YouTube clip from Little Shop of Horrors where Audrey II falls over with hunger pains and says “FEED ME SEYMOUR!”