A couple months ago I posted the astrophotography of Anthony Ayiomamitis and went into some cursory detail in explaining what an Analemma was. Last night I was perusing the on-line collection of maps in the Library of Congress‘ Geography & Mapping Division and came across Bowles’s new and accurate map of the world, or Terrestrial globe : laid down from the best observations and newest discoveries particularly those lately made in the south seas by Anson, Byron, Wallis, Bouganville, Cook, and other celebrated circumnavigators, illustrated with a variety of useful projections and representations of the heavenly bodies the most approved astronomical and geographical definitions tables, and problems with an easy and familiar explanation of the most curious and interesting phoenomena in the universal system. (yeah thats the official name of the map!)

It was published around 1780 in London for the proprietor Carington Bowles and it features quite a few ancillary maps, including a map of the solar system- both northern & southern hemisphere, astronomical latitude and longitude analemma (below), a chart of the world drawn according to Mercator’s projection, a map of the moon (a selenograph), and a diagram of seasons (which I absolutely love). I expect to reuse portions of this map for upcoming entries because its so laden with unique information. For example, there are drawings on how the planets looked like through the telescope and even the oldest drawings of sunspots that I’ve ever seen.

As for this entry, on the right side of the map are two spheres that were designed to teach the viewer how to understand the Analemma and use it to estimate the location of the Sun, planet, or any fixed star anytime in the past, present, or future. While I still haven’t fully wrapped my mind around the instructions, I have transcribed the text from the map below. There are a few errors and typos but I tried my best to keep the text as close to the original as possible.

By clicking on either of the images you can view a larger version and investigate the text yourself. As a decorative element, I used a portion of the tessellation I used to construct Meridian Hill Park Quilt #4 as the background. 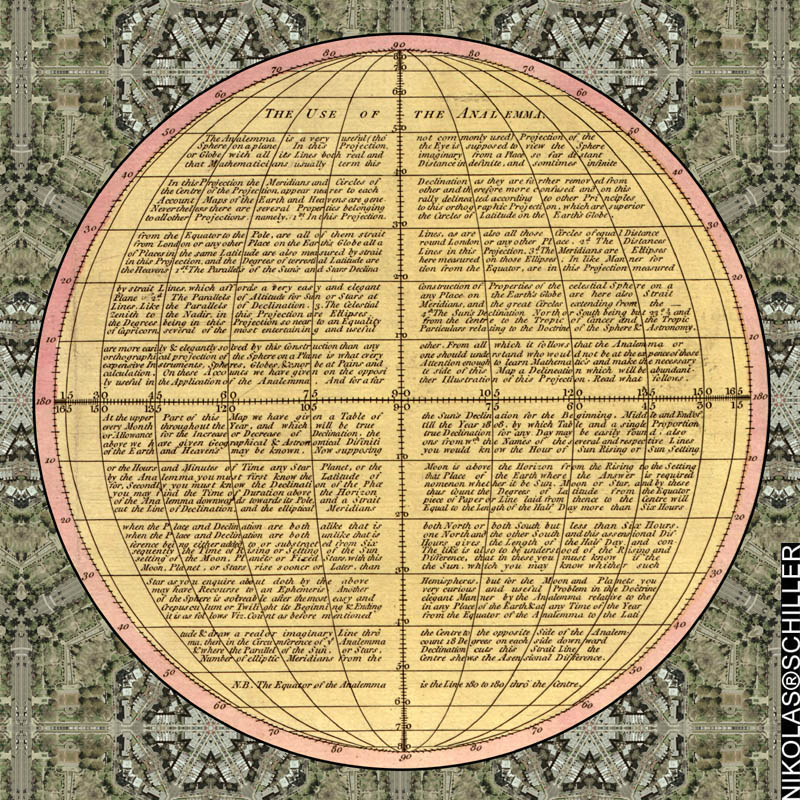 The Use of the Analemma
The Analemma is a very useful (tho’ not commonly used) Projection of the Sphere on a plane. In this Projection the Eye is supposed to view the Sphere or Globe with all its Lines both real and imaginary from a Place so far distant that Mathematicians usually term this Distance in definite, and sometimes infinite.

In this Projection the Meridians and Circles of Declination as they are farther removed from the Centre of the Projection, appear nearer to each other and therefore more confused and on this Account Maps of the Earth and Heavens are generally delineated according to other Principles. Nevertheless there are several Properties belonging to this orthographic Projection, which are superior to all other Projections namely. 1st. In this Projection, the Circles of Latitude on the Earth’s Globe, from the Equator to the Pole, are all of them strait Lines, as are also all those Circles of equal Distance from London or any other Place on the Earth’s Globe all around London or any other Place. 2nd. The Distances of Places in the same Latitude are also measured by strait Lines in this Projection 3rd. The Meridians are Ellipses in this Projection and the Degrees of terrestrial Latitude are here measured on those Ellipses.

In like Manner for the Heavens 1st. The Parallels of the Sun’s and Stars Declination from the Equator, are in this Projection measured by strait Lines, which affords a very easy and elegant Construction of Properties of the celestial Sphere on a Plane. 2nd. The Parallels of Altitude for Sun or Stars at any Place on the Earth’s Globe are here also Strait Lines, Like the Parallels of Declination. 3rd. The Celestial Meridians, and the great Circles extending from the Zenith to the Nadir, in this Projection are Ellipses. 4th The Sun’s Declination North or South being but 23 1/2 degrees and the Degrees being in this Projection so near to an Equality from the Centre to the Tropic of Cancer and the Tropic of Capricorn, several of the most entertaining and useful Particulars relating to the Doctrine of the Sphere & Astronomy are more easily & elegantly solved by this Construction than any other.

From all which it follows that the Analemma or orthographical projection of the Sphere on a Plane is what everyone should understand who would not be at the expense of those expensive Instruments, Spheres, Globes etc., nor be at Pains and Attention enough to learn Mathematics and the necessary calculation.

On these Accounts we have given on the opposite side of this Map a Delineation which will be abundantly useful in the Application of the Analemma. And for a further Illustration of the Projection, Read what follows. 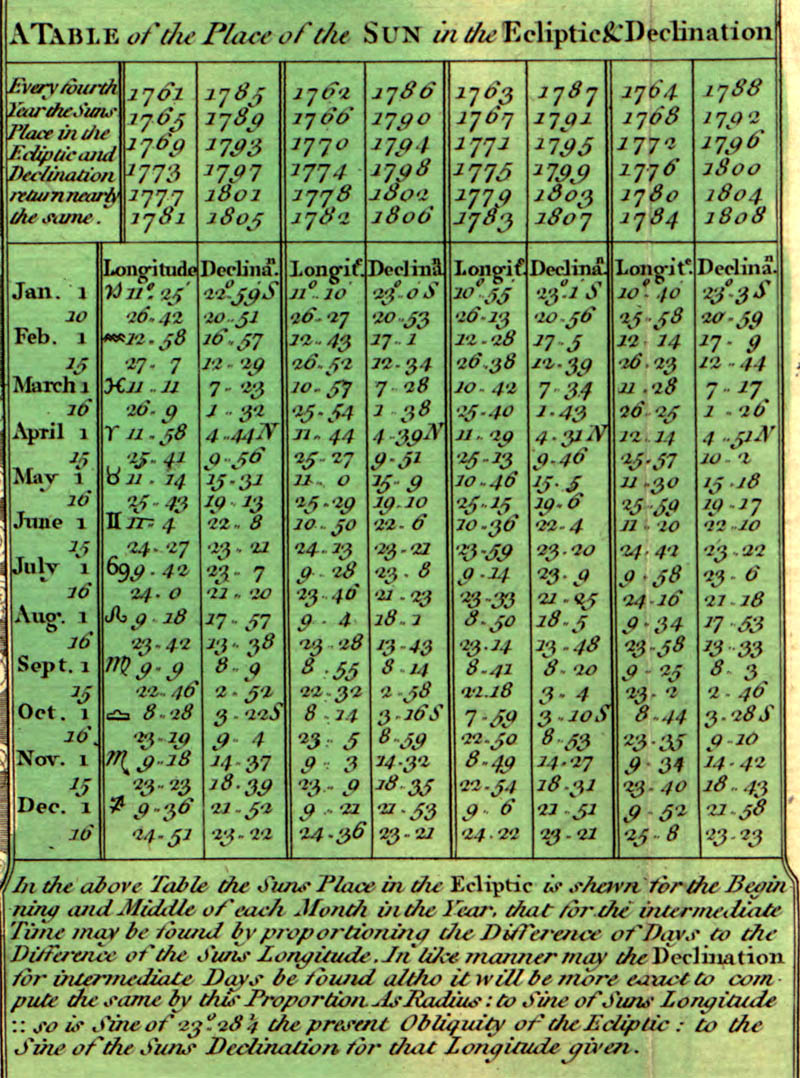 At the upper Part of this Map we have given a Table of the Sun’s Declination for the Beginning, Middle, and End of every Month throughout the Year, and which will be true till the Year 1808, by which Table and a single Proportion of Allowance for the Increase or Decrease of Declination, the true Declination for any Day may be easily found, also above we have given Geographical & Astronomical Definitions from which the Names of the several and respective Lines of the Earth and Heavens may be known.

Now supposing you would know the Hour of Sun Rising or Sun Setting or the Hours and Minutes of Time any Star, Planet, or the Moon is above the Horizon from the Rising to the Setting by the Analemma you first know the Latitude of that Place of the Earth where the Answer is required for. Secondly you must know the Declination of the Phenomenon whether it be Sun, Moon, or Star, and by these you may find the Time of Duration above the Horizon thus Count the Degrees of Latitude from the Equator of the Analemma downwards towards its Pole and a Strait piece of Paper of Line laid from thence to the Centre will cut the Line of Declination and the elliptical Meridians Equal to the Length of the Half Day more than Six Hours when the Place and Declination are both alike that is both North or both South but less than Six Hours, when the Place of Declination are both unlike that is one North and the Other South and this assensional Difference being either added to or subtracted from Six Hours gives the Length of the Half Day, and consequently the Time of Rising or Setting of the Sun.

The like is also to be understood of the Rising and setting of the Moon, Planets, or Fixed Stars, with this Difference, that in these you mist know if the Moon, Planet, or Stars rise sooner or Later than the Sun, which you may known whither such Star as you enquire about doth by the above Hemispheres, but for the Moon and Planets you may have Recourse to an Ephemeris Another very curious and useful Problem in the Doctrine of the Sphere is solveable after the most easy and elegant Manner by the Analemma relative to the Crepusculum or Twilight its Beginning & Ending in any Place of the Earth & at any Time of the Year it is as follows Viz.Count as before mentioned from the Equator of the Analemma to the Latitude & draw a real or imaginary Line thro’ the Centre to the opposite Side of the Analemma, then in the Circumference of y3 Analemma count 18 Degrees on each side downward & where the Parallel of the Sun or Stars Declination cuts this Strait Line the Number of elliptic Meridians from the Centre shews the Ascensional Difference. 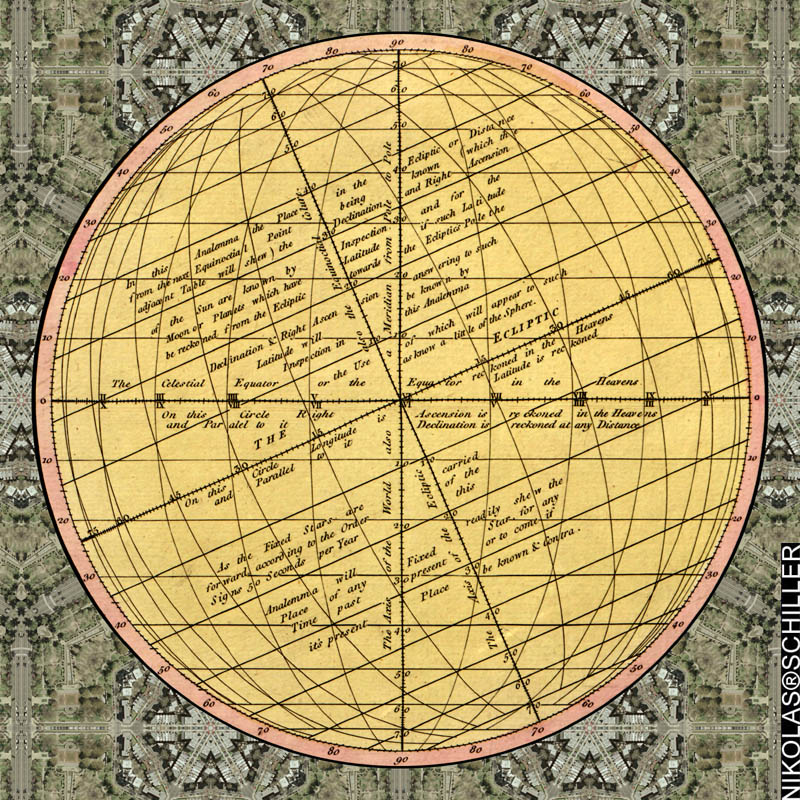 In this Analemma the Place in the Ecliptic or Distance from the next Equinoctial Point being known (which the adjacent Table will shew) the Declination and Right Ascension of the Sun are known by Inspection and for the Moon or Planets which have Latitude if such Latitude be reckoned from the Ecliptic towards the Ecliptic’s Pole the Declination & Right Ascension answering to such Latitude will be known by Inspection in the Analemma the Use of which will appear to such as know a little of the Sphere.

As the Fixed Stars are carried forward according to the Order of the Signs 50 Seconds per Year this Analemma will readily shew the Place of any Fixed Star for any Time past present or to come if its present Place be known & Contra.