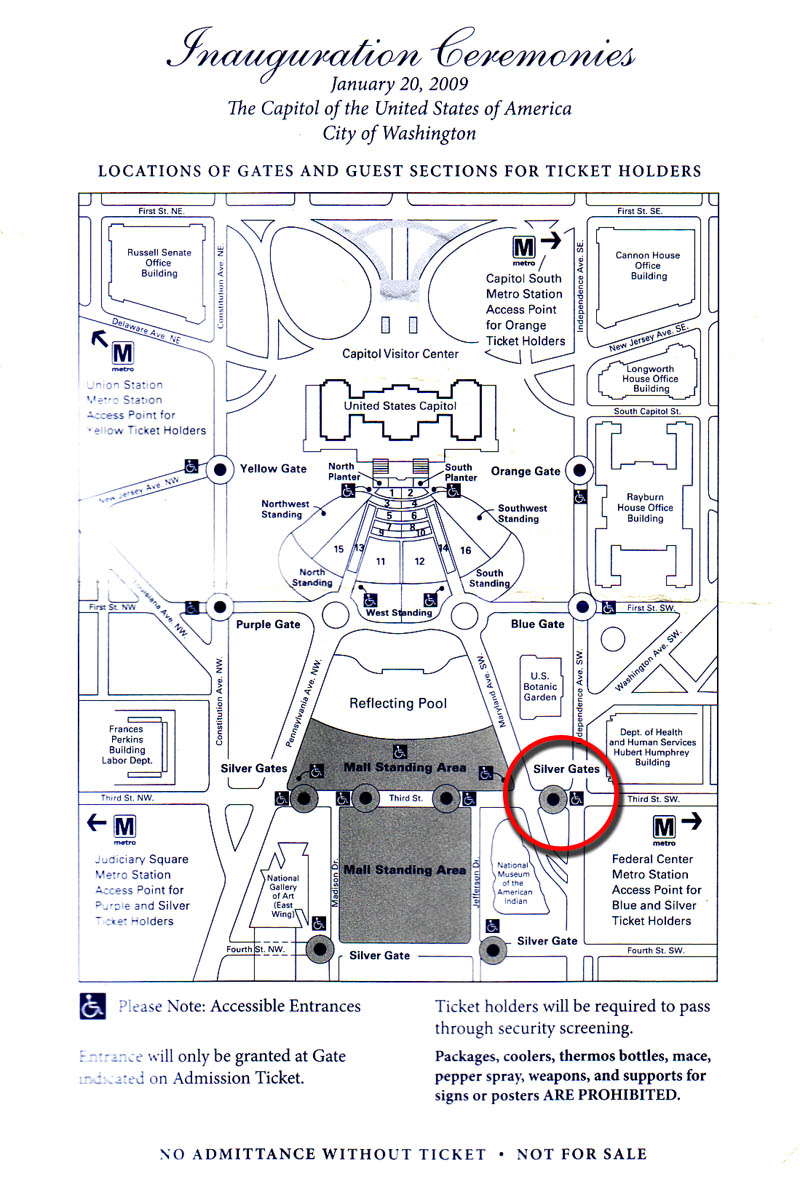 The night before the inauguration, when I was having a good time at the DC Manifest Hope Gallery, an old college friend of mine said, “Do you have tickets for the inauguration tomorrow?” I responded, “No, I wasn’t able to get any.” She opens up her purse and pulls out a Silver ticket and hands it to me and says, “Now you do.” It definitely made my night! A couple hours later I rode my bike over to my friend’s apartment near 21st & E street and went to sleep…

I started the morning off by eating cereal for breakfast and layering myself with clothes because I didn’t want to be cold at the inauguration and I knew I wasn’t able to bring a backpack with me to store extra layers. I ended up wearing three pairs of socks, three pairs of pants, a scarf, a stocking cap, a t-shirt, sweater, fleece jacket, and another fleece-lined jacket. At around 8:00am I hopped on my bicycle and started riding down toward the National Mall.

I was expecting the entire National Mall to have a security perimeter that stretched from the Lincoln Memorial to the U.S. Capitol, however as I rode my bike by Constitutional Gardens, I discovered that there was no security checkpoints, so I kept riding my bike east toward the Capitol by way of the south side of the Washington Monument. My plan was to enter the Silver ticket area from the south side (red circled above) because I figured there would be less people there since the bridges had been closed.

As I made my way on to Independence Ave at 15th street, I could see that the police were having people walk on the sidewalks west, away from the Capitol from the L’Enfant Metro station toward 15th street. As I rode east I had the police tell me multiple times to ride my bicycle on the sidewalk, and I responded “Officer, I cannot walk this bike against the flow of people without causing extra traffic.” They understood, but every 150 feet or so I’d have to repeat myself to another set of police officers.

Eventually, I hit the corner of 3rd & Independence Ave. SE and seeing that there was a huge line at the intersection, I decided to dismount my bicycle and queue up in the line. I locked my bicycle on 3rd street about half a block south of the intersection and started by nearly 3 hour wait…..

This video was taken while I was waiting in line at the intersection of 3rd & Independence Ave. Every once in awhile the officers would tell people to wave the ticket in the air to ensure that they were at the right entrance. Independence Ave was being used as a secure street to shuttle VIPs to the U.S. Capitol, so it had to remain open. What resulted was that people would have to wait at the corner and every few minutes the police would let people cross the street. This caused a tremendous bottleneck that only got worse as the day went on.

After finally crossing the street thousands of us were penned into a somewhat small area where we were to wait and slowly make our way to the screening area. For thousands of people this is as far as they got. I, however, was able to make it in.

Shortly after we crossed the street and started to get pushed together in our makeshift holding area, I recognized an old friend of mine was nearby. I met him at an anti-war demonstration in January of 2007, nearly exactly two years prior. He drove this antique bus that said “ARREST BUSH” on it and he travelled around the country raising awareness for the war crimes committed by the Bush administration. I had last seen him at the demonstration outside the White House the month prior, but I didn’t introduce myself to him (he’s actually in the videos throwing shoes). He was pushing a wheelchair that contained a friend of his and in front of him was another gentleman pushing someone else in a wheelchair.

According to the map on the tickets there were at least 4 different entrances for disabled ticket holders (see map above), yet there were no signs indicating where they were to go and with thousands of people massed together I saw there was going to be some issues. The first problem arose when there was a small surge where everyone had the opportunity to take about two steps forward. This resulted in a woman next to the wheelchair having her foot rolled over. Instead of being polite about the pain she had accidentally received, she made a scene. The poor gal was clearly mentally distraught by being confined together with so many people. The people around were attempted to deescalate the issue by trying to tell the gal that it was a mistake and there was no ill will toward her. Yet she continued to complain and complain.

I decided to step in and offer my services to my friend and the gentleman in front of him. I said, “Hey let me try to clear a way so that you guys can get to entrance for the disabled.” Easier said then done. When I first tried to ask people to move they responded by “Sorry we are packed in here too tight.” And for the next two hours we waited for the line to move forward and it only moved about 5 feet.

In that time I got to know some of the people around me a little better. I learned that the African American gentleman in the wheelchair ahead of my friend was a former Tuskegee Airman and his son was helping him that day. Every once in awhile, they’d let me stand on side of the wheelchair and look above the crowd to see if there was any progress happening ahead of us. Each time I had to report back that there was no movement.

After the swearing in ceremonies started people began to realize that they were probably not going to be able to make inside of the secure area and started to get rather feisty. It was also around this time that both of the disabled men needed to use the bathroom. Unlike the rest of the able-bodied men & women standing in the crowd who could walk over to the fence and urinate, they needed special help to relieve themselves.

He consented and started to blow his whistle and I made my way to the front of the two wheelchairs and started politely tapping people on the shoulders asking them to step to the side to help the wheelchairs pass through. With the police officer holding up the tail end, and I working the front, we started to make progress. Then something special happened.

We started to encounter other disabled men & women also waiting in line and we politely asked them to join the caravan. Some people were rather pissed that the disabled people were receiving special treatment, including the gal who had her foot rolled over, and grumbled at my polite requests to step aside. However, we continued moving this way through the crowd until we reached the gates where the police officer allowed us to pass through.

As a member of the caravan, I was able to make it through the gate and when I turned around to wait for my friends who helped me at the beginning, I counted the number of people who I had assisted. In total, there were over 20 disabled people and over 50 of their friends & relatives. It made me quite proud to see that my good faith effort rewarded so many others.

A moment later, when I was about 25 feet from the gate, I turned around saw that a bunch of people were also breaching the gate!

When we made it to the security checkpoint I was asked to lift up my jacket to show I was not wearing any bombs or had any hidden weapons. I was not asked to show my coveted Silver ticket.

From there I walked with my new friends toward the reflecting pool and watched the swearing in from a large Jumbotron…..