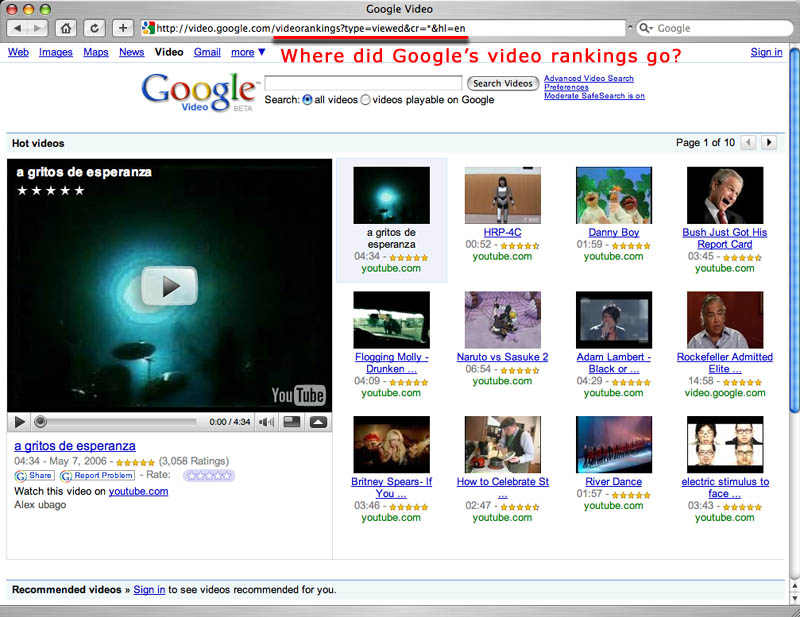 About a week ago I noticed that Google had quietly removed my favorite component of their on-line video services: video ranking. It was an automated service that allowed users to be able to see which videos were viewed the most, blogged the most, and shared the most each day, week, and month. This ranking system offered a unique snapshot of the internet video zeitgeist and oftentimes helped me find videos that I otherwise would not have found.

There was also the ability to seek out the popular videos based on geography through the country search. This allowed me to find videos that were popular in England or Canada and compare them to the popular videos in America. All there is now is Hot Videos, which does not provide the same depth of understanding the other metrics offered.

So why the removal of a popular feature with no note to the public? Well there was a tangentially related note posted back in January on Google’s Blog about the discontinuing support for uploads to Google Video. However, in their FAQ and blog entry there was no wayward mention that the video rankings would be taken away.

I understand that Google Video, the video hosting service, had to spend a great deal of time & money removing copyrighted material on an ongoing basis. With YouTube already having to deal with this, it makes sense to consolidate the video operations within YouTube. But why remove the rankings that cross over to all of the videos hosted by Google, including YouTube? It just doesn’t make sense.

The only answer that I’ve been able to come up with is the suppression of popular videos. By removing the ability of users to see what videos are popular at a given time, Google can prevent users from sharing the popular videos with others. If they want to prevent the next Zeitgeist film or rant about the smelly New World Odor, they have found the perfect way to do so: don’t let people know what is popular through their on-line services. Instead, make them find it themselves through other means.

But why would Google do this? What would be their motive? I really don’t know, but it reminds me of the Samizdat in David Foster Wallace’s Infinite Jest, where Google wants to prevent its users from watching The Entertainment in order to help maintain social cohesion. But, alas, people will always find a way to obtain what they are looking for. The only difference is that it now appears that Google is not being the best search engine it can be.

In summary, I don’t care if Google stops allowing people to upload videos to their Google Video servers, people will find other servers, but don’t remove popular methods of finding video content. I want to know what the most viewed video was yesterday in _____[country]_____. I want to know why ____________ was watched by more people yesterday than any other video on the internet. Google once provided an excellent tool for knowledge discovery through it’s rankings system but has taken it away without a decent reason. So, dear Google, when will you reinstate the video rankings? …And why did you remove them in the first place?

The screen grab above links to what used to be the video ranking page and now forwards visitors to basic Google Video front page. Related Google Entries: