Scans & transcription of the article below: 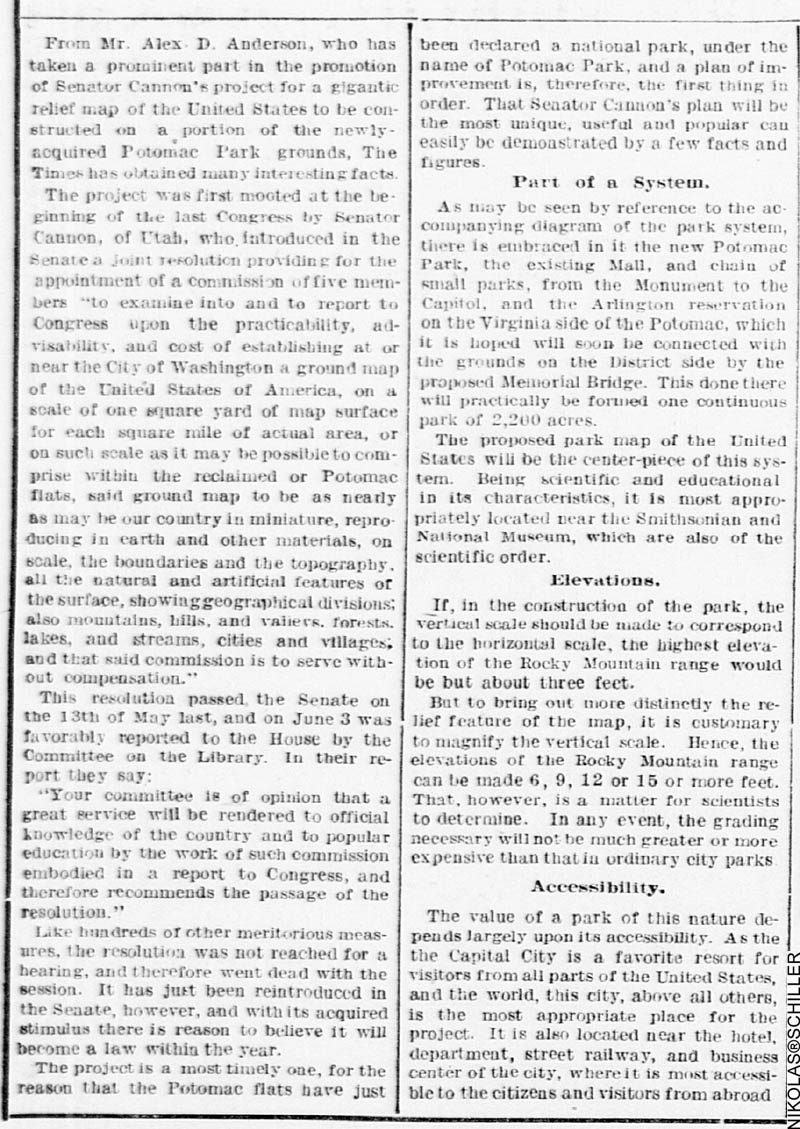 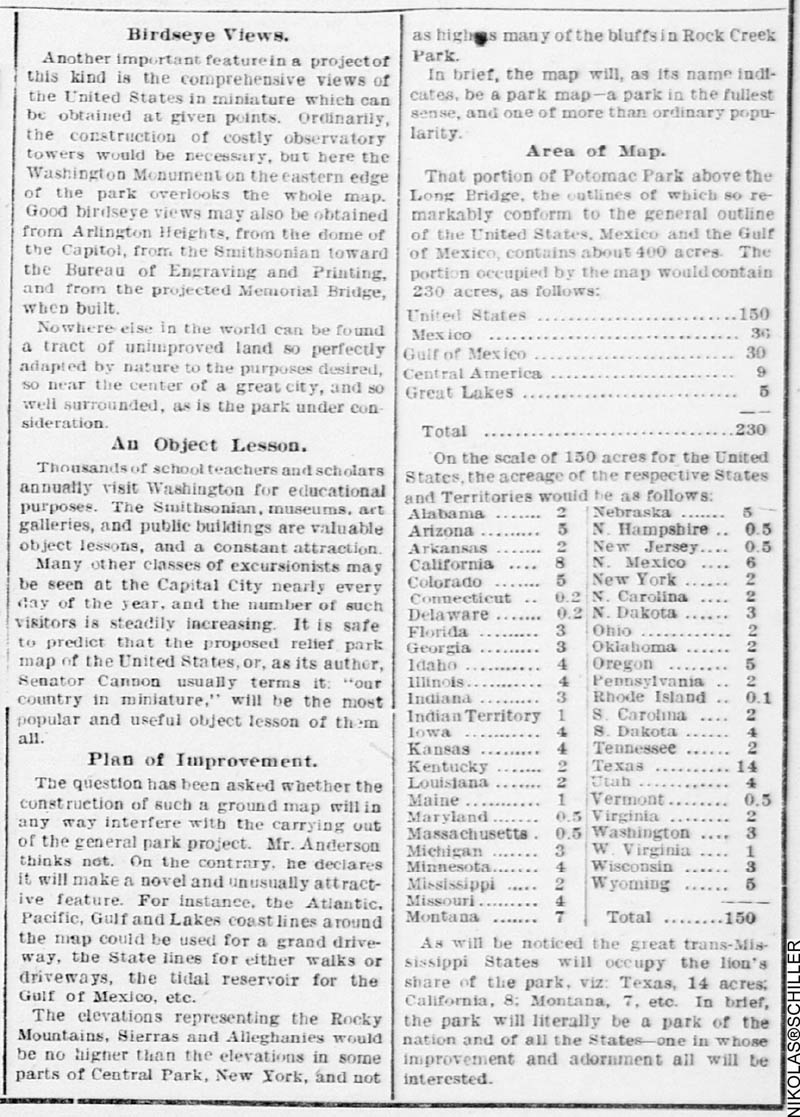 Transcription of the article:
A Projected Relief Park Map of the United States

From Mr. Alex D. Anderson, who has taken a prominent part in the promotion of Senator Cannon’s project for a gigantic relief map of the United States to be constructed on a portion of the newly-acquired Potomac Park grounds, The Times has obtained many interesting facts.

The project was first mooted at the beginning of the last Congress by Senator Cannon, of Utah, who introduced in the Senate a joint resolution providing for the appointment of a commission of five members to “to examine into and to report to Congress upon the practicability, advisability, and cost establishing at or near the City of Washington a ground map of the United States of America, on a scale of one square yard of map surface for each square mile of actual area, or on such a scale as it may be possible to comprise within the reclaimed or Potomac flats, said ground map to be as nearly as may be our country in miniature, repoducing in earth and other materials, on scale, the boundaries and the topography, all the natural and artificial features of the surface, showing geographical divisions; also mountains, hills, and valleys, forests, lakes, and streams, cities and villages, and that said commission is to serve without compensation.”

The resolution passed the Senate on the 13th of May last, and on June 3 was favorably reported to the House by the Committee on the Library. In their report they say:

“Your committee is of opinion that a great service will be rendered to official knowledge of the country and to popular education by the work of such commission embodied in a report to Congress, and therefore recommends the passage of the resolution.”

Like hundreds of other meritorious measures, the resolution was not reached for a hearing, and there went dead with the session. It has just been reintroduced in the Senate, however, and with its acquired stimulus there is reason to believe it will become a law within the year.

The project is a most timely one, for the reason that the Potomac flats have just been declared a national park, under the name of Potomac Park, and a plan of improvement is, therefore, the first thing in order. The Senator Cannon’s plan will be the most unique, useful and popular can easily be demonstrated by a few facts and figures.

Part of a System.

As may be seen by a reference to the accompany diagram of the park system, there is embraced in it the new Potomac Park, the existing Mall, and chain of small parks, from the Monument to the Capitol, and the Arlington reservation on the Virginia side of the Potomac, which it is hoped will soon be connected with the grounds on the District side of by the proposed Memorial Bridge. This done there will practically be formed one continuous park of 2,200 acres.

The proposed park map of the United States will be the center-piece of this system. Being scientific and educational in its characteristics, it is most appropriately located near the Smithsonian and National Museum, which are also of the scientific order.

If, in the construction of the park, the vertical scale should be made to correspond to the horizontal scale, the highest elevation of the Rocky Mountain range would be but about three feet.

But to bring out more distinctly the relief feature of the map, it is customary to magnify the vertical scale. Hence, the elevations of the Rocky Mountain range can be made 6, 9, 12, 15 or more feet. That, however, is a matter for scientists to determine. In any event, the grading necessary will not be much greater or more expensive than that in ordinary city parks.

The value of a park of this nature depends largely upon its accessibility. As the Capital City is a favorite resort for visitors from all of the United States, and the world, this city, above all others, is the most appropriate place for the project. It is also located near the hotel, department, street railway, and business center of the city, where it is most accessible to the citizens and visitors from abroad.

Another important feature in a project of this kind is the comprehensive views of the United States in miniature which can be obtained at given points. Ordinarily, the construction of costly observatory towers would be necessary, but here the Washington Monument on the eastern edge of the park overlooks the whole map. Good birdseye views may also be obtained from Arlington Heights, from the dome of the Capitol, from the Smithsonian toward the Bureau of Engraving and Printing, and from the projected Memorial Bridge, when built.

Nowhere else in the world can be found a tract of unimproved land so perfectly adapted by nature to the purpose desired, so near the center of a great city, and so well surrounded, as in the park under consideration.

Many other classes of excursionists may be seen at the Capital City nearly every day of the year, and the number of such visitors is steadily increasing. It is safe to predict that the proposed relief park map of the United States, or, as its author Senator Cannon usually terms it: “our country in miniature,” will be the most popular and useful object lesson of them all.

The question has been asked whether the construction of such a ground map will in any way interfere with the carrying out of the general park project. Mr. Anderson thinks not. On the contrary, he declares it will make a novel and unusually attractive feature. For instance, the Atlantic, Pacific, Gulf, and Lakes coastlines around the map could be used for a grand driveway, the State lines for either walks or driveways, the tidal reservoir for the Gulf of Mexico, etc.

The elevations representing the Rocky Mountains, Sierras, and Alleghanies would be no higher than the elevations in parts of Central Park, New York, and not as high as many of the bluffs in Rock Creek Park.

In brief, the map will, as its name indicates, be a park map- a park in the fullest sense, and one of more than ordinary popularity.

That portion of Potomac Park above the Long Bridge, the outlines of which so remarkably conform to the general outline of the United States, Mexico and the Gulf of Mexico, contains about 400 acres. The portion occupied by the map would contain 230 acres, as follows:

On the scale of 150 acres for the United States, the acreage of the respective States and Territories would be as follows:

As will be noticed the great trans-Mississippi States will occupy the lion’s share of the park, viz Texas, 14 acres; California, 8; Montana, 7, etc. In brief, the park will literally be a park of the nation and of all the States– one in whose improvement and adornment all will be interested. 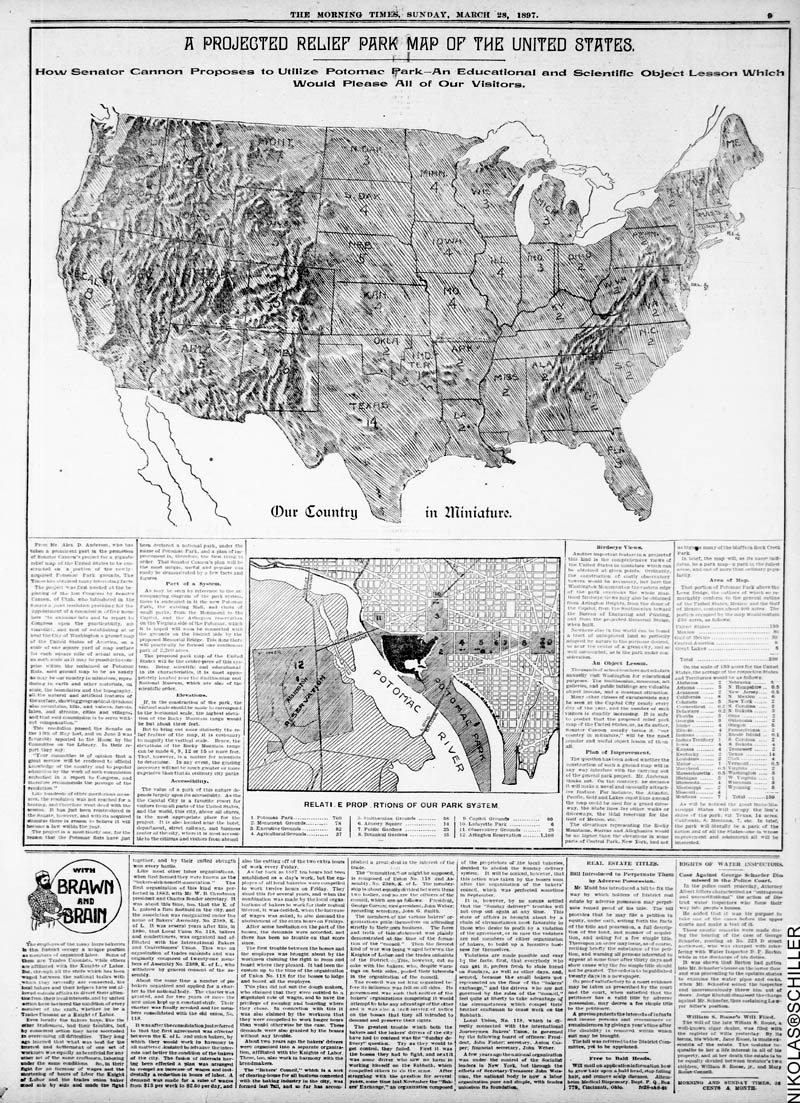 UPDATE – This map was slightly edited and is featured as the map of October in both editions of my 2010 Cartographic Calendar: 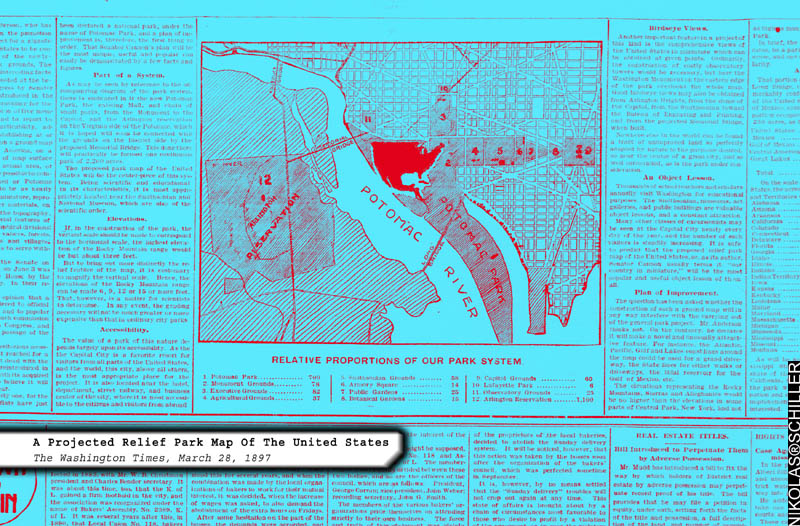 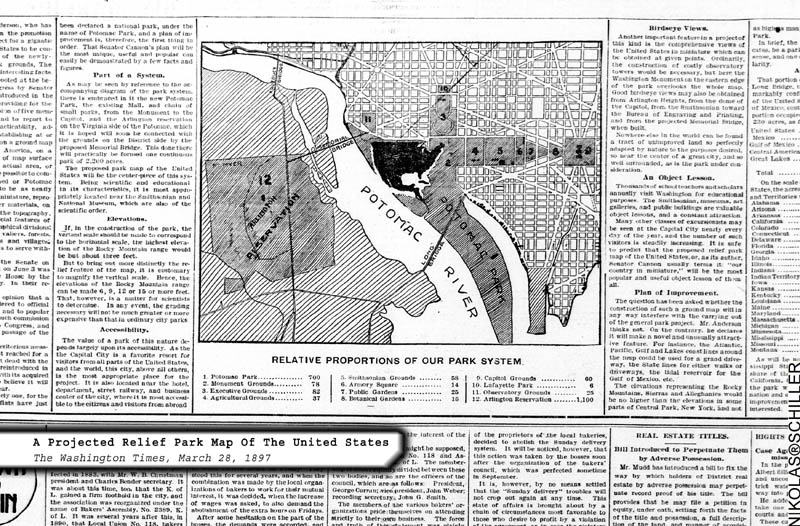