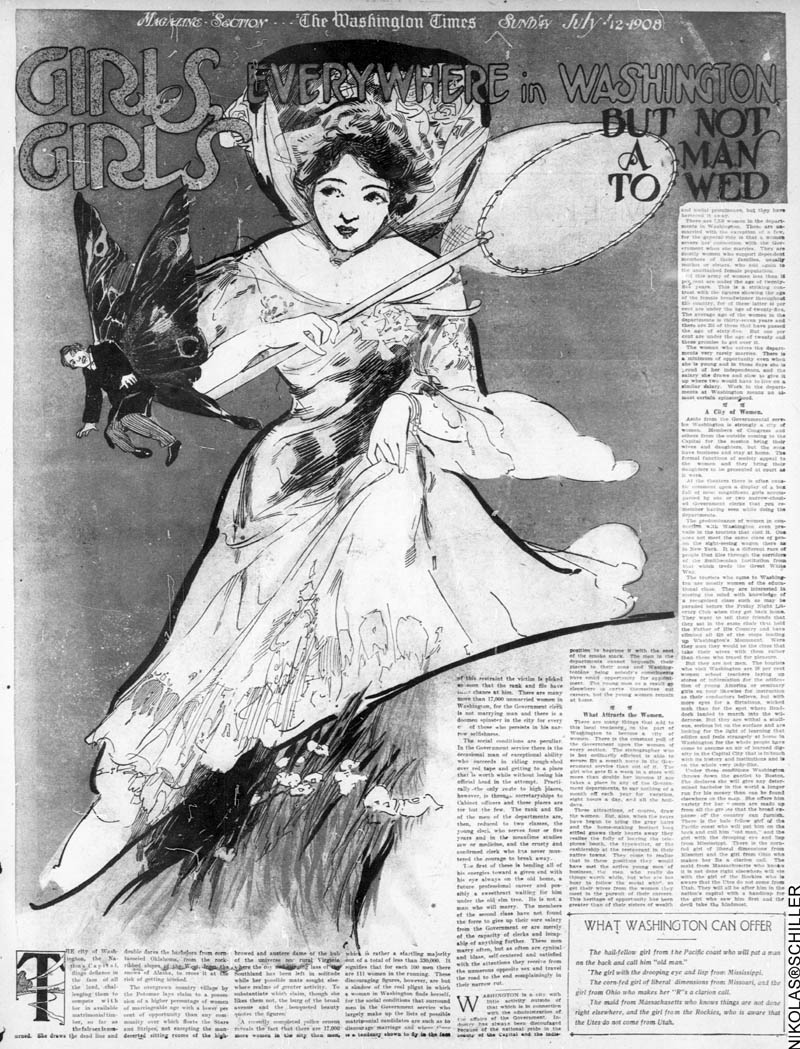 Girls, Girls Everywhere In Washington,
But Not A Man To Wed

The city of Washington, the Nation’s Capital, flings defiance in the face of all the land, challenging them to compete with her in available matrimonial timber, so far as the fair sex is concerned. She draws the dead line and double dares the bachelors from corn-tasseled Oklahoma, from the rock-ribbed slopes of the West, from the snows of Alaska, to cross it at the risk of getting hitched.

The overgrown country village by the Potomac lays claim to a possession of a higher percentage of women of marriageable age with a lower per cent of opportunity than any community over which floats the Stars and Stripes, not excepting the man-deserted sitting rooms of the high-browed and austere dame of the hub of the universe nor rural Virginia where the coy and clinging lass of the Southland has been left in solitude while her possible mate sought elsewhere realms of greater activity. To substantiate which claim, though she likes them not, the burg of the broad avenue and the bouqueted beauty quotes the figures.

A recently completed police census reveals the fact that there are 17,000 more women in the city than men, which is rather startling majority out of a total of less than 330,000. It signifies that for each 100 men there are 111 women in the running. These discouraging figures, however, are but a shadow of the real plight in which a woman in Washington finds herself, for the social conditions that surround men in the Government service who largely make up the lists of possible matrimonial candidates are such as to discourage marriage and where there is a tendency shown to fly in the face of this restraint the victim is picked so soon that the rank and file have little chance at him. There are many more than 17,000 unmarried women in Washington, for the Government clerk is not marrying man and there is a doomed spinster in the city for every one of those who persists in his narrow selfishness.

The social conditions are peculiar. In the Government service there is the occasional man of exceptional ability who succeeds in riding rough-shod over red tape and getting to a place that is worth while without losing his official head in the attempt. Practically the only route to high places, however, is through secretaryships to Cabinet officers and these places are for but the few. The rank and file of the men of the departments are, then, reduced to two classes, the young clerk who serves four or five years and in the meantime studies law or medicine, and the crusty and confirmed clerk who has never mustered the courage to break away.

The first of these is bending all of his energies toward a given end with his eye always on the old home, a future professional career and possibly a sweetheart waiting for him under the old elm tree. He is not a man who will marry. The members of the second class have not found to give up their sure salary from the Government or merely of the capacity of clerks and incapable of anything further. These men marry often, but as often are cynical and blase, self-centered and satisfied with the attentions they receive from the numerous opposite sex and travel the road to the end complainingly in their narrow rut.

Washington is a city with activity outside of that which is in connection with the administration of the affairs of the Government. Industry has always been discouraged because of the national pride in the beauty of the Capital and the indisposition to begrime it with the soot of the smoke stack. The men in the departments cannot bequeath their places to their sons and Washingtonians being nobody’s constituents have small opportunity for appointment. The young men as a result go elsewhere to carve themselves out careers, but the young women remain at home.
What Attracts the Women.

There are many things that add to this local tendency on the part of Washington to become a city of women. There is the constant pull of the Government upon the women every section. The stenographer who is but ordinarily efficient is able to secure $20 a month more in the Government service than out of it. The girl who gets $5 a week in a store will more than double her income if she takes a place in any of the Government departments, to say nothing of a month off each year for vacation, eight hours a day, and all the holidays.

These attractions, of course, draw the women. But, alas, when the years have begun to bring the gray hairs and the home-making instinct long stifled gnaws their hearts away they realize the folly of leaving the telephone booth, the typewriter, or the cashiership at the restaurant in their native towns. They come to realize that in these positions they would have met the active young men of business, the men who really do things worth while, but who are too busy to follow the social whirl, so get their wives from the women they meet in the pursuit of their careers. This heritage of opportunity has been greater than their sisters of wealth and social prominence, but they have bartered it away.

There are 7,358 women in departments in Washington. These are unmarried with the exception of a few, for the general rule is that a woman severs her connection with the Government when she marries. They are mostly women who support dependent members of their families, usually mother or sisters, who add again to the unattached female population.

The woman who enters the departments very rarely marries. There is a minimum of opportunity even when she is young and in those days she is proud of her independence and the salary she draws and slow to give it up where two have to live on a similar salary. Work in the departments at Washington means an almost certain spinsterhood.

A City of Women.

Aside from the Government service Washington is strongly a city of women. Members of Congress and others from the outside coming to the Capital for the session bring their wives and daughters, but the sons have business and stay at home. The formal functions of society appeal to the women and they bring their daughters to be presented at court as it were.

At the theaters there is often caustic comment upon a display of a box full of most magnificent girls accompanied by one or two narrow-chested Government clerks that you remember seen while doing the departments.

The predominance of women in connection with Washington even prevails in the tourists that visit it. One does not meet the same class of people on the sight-seeing wagon there as in New York. It is a different race of people that files through the corridors of the Smithsonian Institution from that which trods the Great White Way.

The tourists who come to Washington are mostly women of the educational class. They are interested in storing the mind with knowledge of a recognized class such as may be paraded before the Friday Night Literary Club when they get back home. They want to tell their friends that they sat in the same chair that held the Father of His Country and have climbed all 510 of the steps leading up Washington’s Monument. Were they men they would be the class take their wives with them rather than those who travel for pleasure.

But they are not men. The tourists who visit Washington are 50 per cent women school teachers laying up stores of information for the edification of young America or seminary girls en tour likewise for instruction as their conductors believe but with more eyes for a flirtatious, wicked man than for the spot where Braddock landed to march into the wilderness. But they are withal a studious, serious lot on the surface and are looking for the light of learning that edifies and feels strangely at home in Washington for the whole people have come to assume an air of learned dignity in the Capital City that is in touch with its history and institutions and is on the whole very lady-like.

Under these conditions Washington throws down the gantlet to Boston. She declares she will give any determined bachelor in the world a longer run for his money than can be found elsewhere on the map. She offers him variety for her women are made up from all the grades that the broad expanse of the country can furnish. There is the hale fellow girl of the Pacific coast who will pat him on the back and call him “old man,” and the girl with the drooping eye and lisp from Mississippi. There is the corn-fed girl of liberal dimensions from Missouri and the girl from Ohio who makes her Rs a clarion call. The maid from Massachusetts who knows it is not done right elsewhere will vie with the girl of the Rockies who is aware that the Utes do not come from Utah. They will all be after him in the nation’s capital with a handicap for the girl who saw him first and the devil take the hindmost. 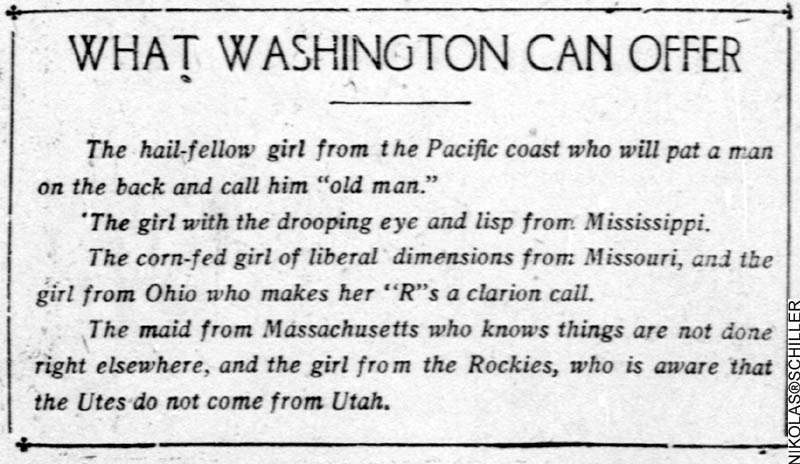