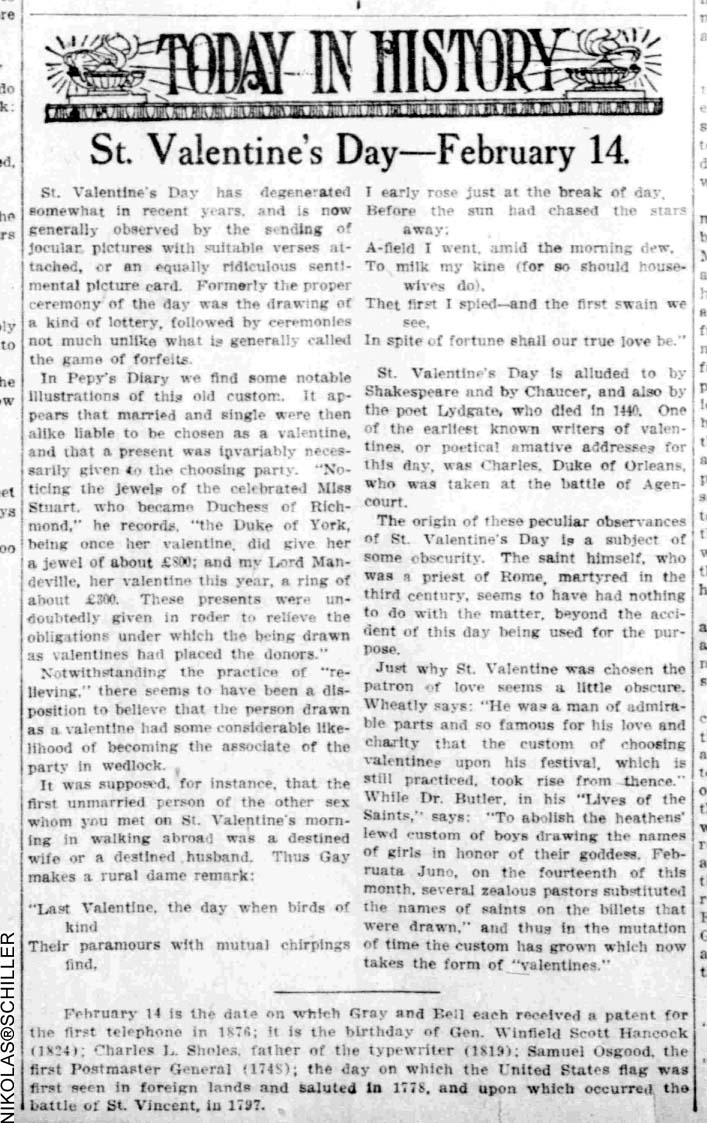 St. Valentine’s Day has degenerated somewhat in recent years, and is now generally observed by the sending of jocular pictures with suitable verses attached, or an equally ridiculous sentimental picture card. Formerly the proper ceremony of the day was the drawing of a kind of lottery, followed by ceremonies not much unlike what is generally called the game of forfeits.

In Pepy’s Diary we find some notable illustrations of this old custom. It appears that married and single were then alike liable to be chosen as a valentine, and that a present was invariably necessarily given to the choosing party. “Noticing the jewels of the celebrated Miss Stuart, who became Duchess of Richmond,” he records, “the Duke of York, being once her valentine, did give her a jewel of about £800; and my Lord Mandeville, her valentine this year, a ring of about £300. These presents were undoubtedly given in roder to relieve the obligations under which the being drawn as valentines places the donors.”

Notwithstanding the practice of “relieving,” there seems to have been a disposition to believe that the person drawn as a valentine had some considerable likelihood of becoming the associate of the party in wedlock.

It was supposed, for instance, that the first unmarried person of the other sex whom you met on St. Valentine’s morning in walking abroad was a destined wife or a destined husband. Thus Gay makes a rural dame remark:

“Last Valentine, the when birds of kind,
Their paramours with mutual chirpings find,
I early rose just at the break of day,
Before the sun had chased the stars away;
A-field I went, amid the morning dew,
To milk my kine (for so should housewives do).
Thet first I spied- and the first swain we see.
In spite of fortune shall our true love be.”

St. Valentine’s Day is alluded to by Shakespeare and by Chaucer, and also by the poet Lydgate, who died in 1440. One of the earliest known writers of valentines, or poetical amative address for this day, was Charles, Duke of Orleans, who was taken at the battle of Agencourt.

The origin of these peculiar observances of St. Valentine’s Day is a subject of some obscurity. The saint himself, who was a priest of Rome, martyred in the third century, seems to have had nothing to do with the matter beyond the accident of this day being used for the purpose.

Just why St. Valentine was chosen the patron of love seems a little obscure. Wheatly says: “He was a man of admirable parts and so famous for his love and charity that the custom of choosing valentines upon his festival, which is still practiced, too rise from thence.” While Dr. Butler, in his “Lives of the Saints,” says: “To abolish the heathens’ lewd custom of boys drawing the names of girls in honor of their goddess, Februata Juno, on the fourteenth of this month, several zealous pastors substituted the names of saints on the billets that were drawn.” and thus in the mutation of time the custom has grown which now takes the form of “valentines.”

February 14 is the date which Gray and Bell each received a patent for the first telephone in 1876; it is the birthday of Gen. Winfield Scott Hancock (1824); Charles L. Sholes, father of the typewriter (1819); Samuel Osgood, the first Postmaster General (1748); the day on which the United States flag was first seen in foreign lands and saluted in 1778, and upon which the battle of St. Vincent, in 1797.

This newspaper article was transcribed from the scan of the February 14th, 1910 edition of the Washington Herald from the Chronicling America newspaper collection and is in the public domain.