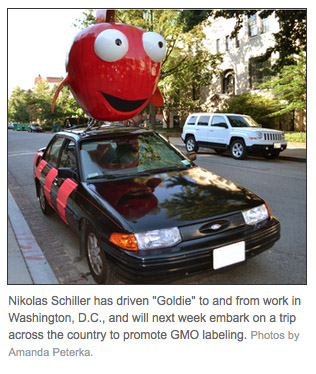 Nicknamed “Goldie,” it is one of five “fishy food” cars driving around Washington in recent weeks to promote the labeling of genetically modified food. Others carry sculptures of a corn cob, soybean, sugar beet and tomato.

They are the brainchild of the Mintwood Media Collective, a small public relations firm in D.C. that also is active in hemp issues, and local artist César Maxit. Funding was donated by Dr. Bronner’s Magic Soaps, an organic and fair-trade soap company.

Next week, the cars will depart on a 3,000-mile journey across the country ending in the state of Washington, where a fierce battle is being waged between food companies and anti-GMO activists over a November ballot measure to require the labeling of all foods containing genetically engineered ingredients.

The cars will pass through Pittsburgh; Columbus, Ohio; Indianapolis; Chicago; Denver; and Salt Lake City before reaching their final stop in Seattle. They’ll join in protests and press conferences and stop at Monsanto Co.’s global headquarters in Missouri along the way.

For the past several weeks, though, they’ve been circling D.C. in a bid to raise awareness of the nationwide campaign to label GMOs. 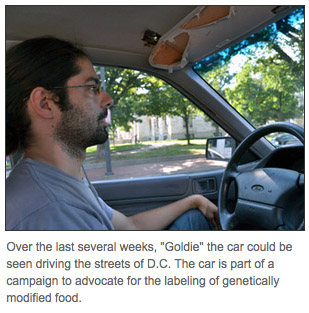 As Schiller passed through the heart of downtown on a recent rush-hour commute home, several people stopped to gawk in the middle of intersections. A young girl with auburn hair pulled her father’s arm excitedly, grinning ear to ear.

“It’s about making sure that customers and consumers in America are informed about their food purchases,” Schiller said as his car passed K Street lobbyists and tourists alike.

The current push to label genetically modified food began about two years ago with a march from Brooklyn, N.Y., to the White House. Supporters argue that genetically engineered foods have not been proved safe for human consumption and that Americans should have the right to choose whether to purchase foods with ingredients that have been genetically modified.

The first of the cars — Fishy Corn — made its debut at the 2011 march, driving the entire route. At that time, its sculpture was built of a steel frame wrapped in chicken wire and covered in spray-painted packing tape.

The designs have been updated since then. Their bones still consist of a steel frame wrapped in chicken wire, but they now have a hard fiberglass shell. Goldie was designed in January of this year, with a Ford Escort purchased for the purpose. The sculpture is bolted down through the roof and can be removed if necessary, but it takes about six people to hoist it off the car.

“We use the fishy food as a metaphor. Not all these products have fish genes in them. We use it as a metaphor that there’s something fishy about it,” said Adam Eidinger, an activist shareholder with Monsanto who drove the Fishy Corn car from New York to D.C. in 2011. “If you don’t know what it is, it’s something fishy. That’s why we’re winning — that’s common sense.”

The battle over labeling hit new heights last year in the months leading up to the November elections in California, where a ballot measure would have required food companies to label all foods that contain genetically engineered ingredients. Food companies and trade organizations poured more than $40 million into a campaign to oppose the measure, and it was defeated 53 percent to 47 percent.

“Unfortunately, Prop 37 didn’t pass but in its failure was quite a large win for awareness building,” said Schiller, who first became involved in the campaign at the 2011 march, when he drove a 14-foot box truck that carried supplies for the walkers along the 313-mile route. “All of a sudden Americans were actually talking about that when there hadn’t been much talk about it for the last decade.”

This year, legislators in more than 20 states introduced measures to require the labeling of GMOs. Connecticut recently became the first state to enact a law requiring food companies to label products with genetically engineered ingredients, though the law is contingent on other nearby states putting in place similar measures.

Supporters see Washington state as the main battleground and are hoping that successful passage of ballot initiative I-522 there will spur action on a national level, either in the form of a national law or Food and Drug Administration action to require labels.

But food manufacturers and biotechnology companies that oppose labeling cite costs and say that such labels would be misleading because the majority of science on genetically modified food has shown them safe for human consumption.

In the wake of the heightened debate over genetically modified organisms and the recent discovery of unapproved genetically engineered wheat in a farm field in Oregon, Monsanto, BASF Corp., Bayer CropScience, Dow AgroSciences, DuPont Co. and Syngenta AG this week have banded together to launch a website, GMOanswers.com, to address health concerns with the foods.

“We oppose current initiatives to mandate labeling of ingredients developed from GM seeds in the absence of any demonstrated risks,” Monsanto says. “Such mandatory labeling could imply that food products containing these ingredients are somehow inferior to their conventional or organic counterparts.”

In D.C., the “fishy” cars have attracted wide attention on the street and in social media. After circling the city, Schiller will log on to Twitter to see who has posted photos of Goldie — usually there are several people — and will respond in the voice of the vehicle.

Although the car is registered in his name — and is Schiller’s first vehicle as an adult — it will soon be handed over to activists in Washington state until at least after the November elections. He has been making the most of it before that happens and taking long, roundabout routes to and from his office in Adams Morgan, a hip neighborhood in the nation’s capital.

During rush hour earlier this week, as Schiller stopped Goldie at a light in downtown D.C., a bicyclist rode up in the bike lane next to the passenger side of the car. He tapped on the window.

Schiller handed the cyclist a palm-sized bright-blue pamphlet fresh off the presses that relays the group’s main talking points. The pamphlet was designed by Maxit, the same artist who designed the structures for the tops of the cars.

“Oh, you guys are doing GMO stuff,” the cyclist responded. “Very great. I’ll pass it on. Thank you.”

Encounters like that are not uncommon. Schiller said he normally explains that the car’s name is Goldie and she’s half goldfish, half golden delicious. While there isn’t a genetically engineered apple on the market, the Agriculture Department is currently reviewing an application for one that doesn’t turn brown when stored.

Schiller will take the car in for detailing before next week’s cross-country drive. The car will be painted with messaging describing its missions. Up through this week, though, it’s been unlabeled — like GMOs, Schiller quipped.

Inquisitive pedestrians are usually receptive to the car’s message, he said.

“They give the thumbs up and go like ‘I want food labeled’ or ‘I don’t want to eat that stuff,'” he said. “Most people don’t realize that they’re eating it so there’s this disconnect between the knowledge of the food that they’re actually eating and the knowledge of the food that they don’t want to be eating. Generally, if you’re eating a processed food that came out of a box at the supermarket, it likely has a genetically engineered ingredient. But since it doesn’t say ‘genetically engineered ingredient,’ they’re not going to know that that’s what it is.”

Since the 1990s, the Food and Drug Administration has officially held the position that genetically engineered foods do not require special labeling. There are eight genetically modified crops currently available in the United States: corn, soybeans, cotton, canola, alfalfa, sugar beets, papaya and squash.

“The policy states that FDA has no basis for concluding that bioengineered foods differ from other foods in any meaningful or uniform way,” FDA says, “or that, as a class, foods developed by the new techniques present any different or greater safety concern than foods developed by traditional plant breeding.”

The effects of mandatory labeling would be “positively damaging to public understanding of science,” Mark Lynas, an environmentalist who recently shocked the anti-GMO world by reversing his position to one in favor of genetically modified food, said at an event this month in D.C.

Industry, he said, would be better served by a widespread voluntary labeling system for non-GMO products that allows consumers to choose what types of food they wish to buy, he said.

“I think what’s a real problem is to have mandatory labeling, which will then totally restructure the whole supply chain, and we’ll have knock-on effects, which actually do affect food security in other parts of the world,” Lynas said.

In the absence of labeling, Schiller has been growing his own vegetable garden at his house in D.C. for several years and purchasing his groceries from Whole Foods, which announced earlier this year that it would require labels on all GMO products.

He’s expecting varied levels of turnout and plenty of stares at the stops along the route to Washington state next week. But he’s gotten used to the attention.

“It’s one of those things that becomes so normal that you don’t realize it’s there,” Schiller said. “The only thing that kind of reminds you is the fact that you’ve got people pointing and staring and taking photographs.”

This article was obtained online from E&E News. The article is not in the public domain but is being republished here under the fair use doctrine of U.S. copyright law in order to document my advocacy for honest food labeling.