Nikolas Schiller, another top campaign organizer, said he came to see it as a “Snowden factor.” He said, “People don’t want to be put on some government list.” 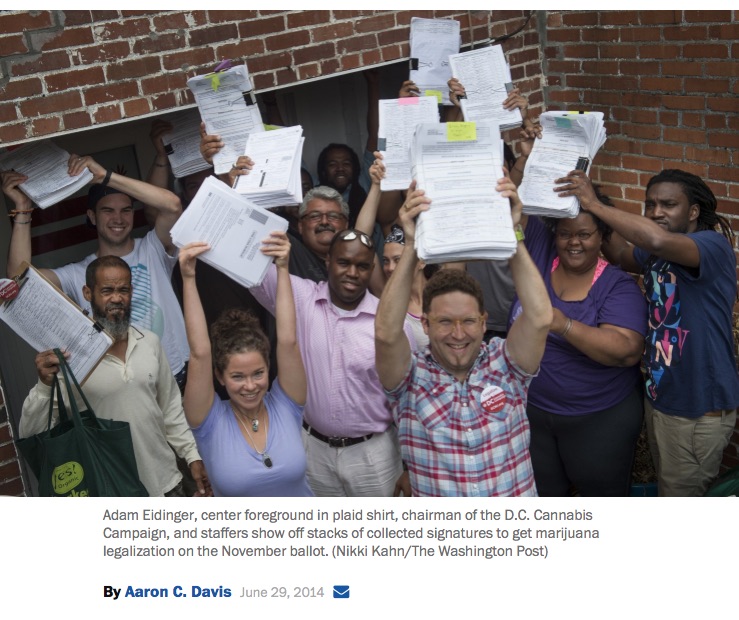 Odds are increasing that D.C. will vote on legalizing marijuana — despite Congress

Sixteen years ago, D.C. activists gathered signatures to let voters decide if the District should be among the first in the nation to legalize medical marijuana. Then Congress stepped in, and city officials were not even allowed to count the ballots that voters had cast.

Inside a rented house in Northwest Washington, behind a shaggy bear skin rug strung up as a makeshift curtain and amid rollaway beds set up for signature gatherers who have come from as far away as California and Colorado, there’s growing anxiety that history is about to repeat itself.

Organizers for Initiative 71, a measure that would fully legalize possession of marijuana in the District, plan to announce this week that they are closing in on 60,000 signatures — a comfortable buffer over the 22,600 needed to ensure the measure qualifies for the November ballot.

Having voters decide if the city should follow Colorado and Washington state in legalizing marijuana seemed – at least until last week – like a logical progression in the District.

District voters support legalization by a ration of 2 to 1, polls show. The city has medical marijuana dispensaries and is taking steps to soon loosen restraints and let doctors recommend the drug for any ailment. The D.C. Council even voted in March to decriminalize possession, making it a fine of $25, instead of a year-long jail term.

But just weeks before those more lenient provisions were to take effect, House Republicans last week resurrected the kind of budget language that for more than a decade blocked the District from launching the medical marijuana program that voters had overwhelmingly endorsed.

“It’s violating our rights as District residents, and I’m just afraid it’s going to happen all over again,” said Adam Eidinger, one of the chief organizers of the D.C. Cannabis Campaign. “If we can just get this on the ballot .?.?. then we’ll have a vote. That’s my immediate concern.”

Whether the budget measure passed last week by House Republicans, which bans the District from spending any money to loosen penalties for pot, could become law remains unclear. But supporters now see it as a race against Congress to get the measure certified.

Should federal lawmakers pass a spending plan with the restriction before Nov. 4, there is precedent for D.C. elections officials to decide that they are prohibited from counting votes on the issue.

If Congress hasn’t passed a budget by then, however, there is a strong chance that on Nov. 4, the District will legalize pot.

Popular support for legalization in the nation’s capital would hasten the arrival on Capitol Hill of a debate that has largely simmered in Western states. It would also present the District’s next mayor and council with a mandate to turn the initiative into a workable law, probably by regulating and taxing the sale of cannabis.

On Friday, one of the city’s candidates for mayor, council member David A. Catania (I-At large), staged a campaign event on the issue, demanding a meeting with Rep. Andy Harris, the Maryland Republican who led the charge to upend the District decriminalization.

Harris was gone, back to his Eastern Shore district, but he prepared a press statement in advance criticizing Catania and his stated focus of his mayoral campaign: schoolchildren.

“Really? Was he serious?” read Harris’s statement. “Passing marijuana decriminalization bills for teenagers is not the way to lower D.C.’s shamefully high rate of drug abuse among teenagers.”

Marijuana advocates note that drug treatment for minors had to be stripped from the ballot measure in part to comply with a requirement that D.C. initiatives proposed by voters may not commit the city to spending money.

As circulated, the measure would allow people 21 and older to possess as much as two ounces of marijuana for personal use and to grow up to three marijuana plants at home. To steer clear of a direct contradiction of federal law, the measure does not allow for the sale of marijuana.

Legalizing marijuana is uniquely complicated in the District — where anonymous polling shows that a vast majority of city residents support legalization, but where many fewer residents are willing to sign a petition saying so publicly.

Outside Metro stops and courthouses, petitioners said they were routinely brushed aside by buttoned-up bureaucrats and lawyers who said they feared for their day jobs, security clearances or standing in federal agencies.

Nikolas Schiller, another top campaign organizer, said he came to see it as a “Snowden factor.” He said, “People don’t want to be put on some government list.”

In the campaign house, which radiates the scent of old resin across from the Zambian Embassy on Massachusetts Avenue, volunteers developed their own code names for volunteers on their side who felt equally constrained. One who spent evenings gathering signatures occasionally works at the White House, another at the Justice Department, a third still has a security clearance as a former Pentagon employee.

Without disclosing identities, the campaign contacted the federal office of personnel to see if the employees could be compromised. Signature gatherers boned up on the Hatch Act to have a comeback at Metro stations for bureaucrats’ concerns that signing the petition would run afoul of federal election rules.

The signatures also got tougher to come by, and like so many other D.C. political ventures, the campaign began depending more heavily on professionals. Some collect $2.75 per signature, pulling in as much as $1,100 a week.

“Oh my God. We have so many people collecting who are not users. It’s the non-users who are the most motivated,” Eidinger said. “It’s generally the jail thing; they really believe in social justice.”

Inadvertently, the campaign found that black residents were more effective at collecting signatures in predominantly white areas of the city than the other way around. When it was cast as preventing blacks from needlessly going to jail, more people signed on. But “if it was whites asking whites, they’d get blown off,” Eidinger said.

Still, Eidinger said the largest number of signatures for the ballot measure have come from the city’s majority African American wards east of the Anacostia River.

“If we’re going to get serious about ending mass incarcerations, this is serious policy,” said G. Malik Burnett, a national affairs manager with the Drug Policy Alliance, who was in the campaign headquarters last week discussing fundraising for November.

Eidinger put it another way: “Maybe D.C. is not about this, like, strict law and order, and instead, it’s more about, like, geez, can we all live together and stop throwing people in jail for stupid things?”