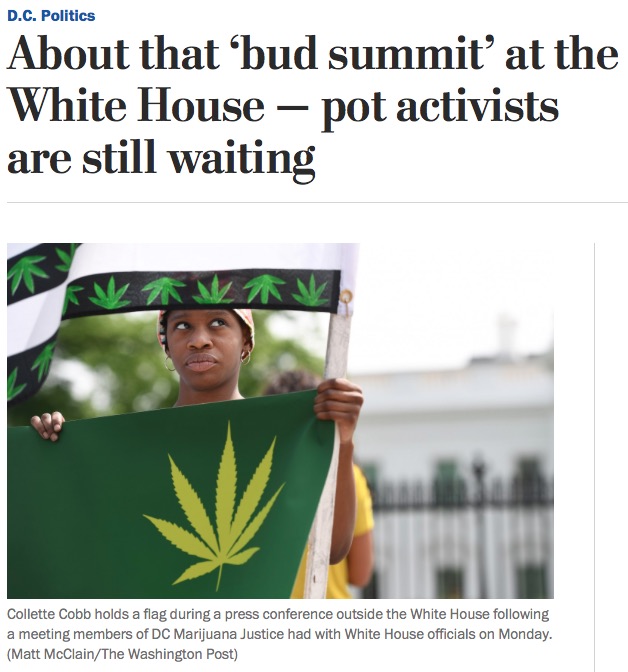 It took a pot-smoking protest outside the White House, but on Monday, advocates for marijuana legalization were set for a historic face-to-face meeting with the Obama administration about easing laws governing the drug.

Leaders of the ballot-measure fight that legalized marijuana in the nation’s capital said they were granted a White House meeting, but it was with two junior-level staffers in President Obama’s Office of National Drug Control Policy.

There was no presidential entourage, no promises of more meetings to come. In fact, there was no visit to the White House proper, but a mostly empty conference room in an adjacent building.

[Turn’s out, smoking pot outside the White House gets you invited inside.]

“They didn’t say a lot; they took notes, maybe four pages’ worth,” said Adam Eidinger, the face of the D.C. marijuana movement, who dressed up for the visit in a black suit with a black-and-green marijuana leaf tie. “We asked questions, but they didn’t answer. .?.?. They nodded a lot. I think they understood us.”

Obama said in January that reforming marijuana laws is not on his agenda in his final year in office.

But activists’ hopes have been raised by a combination of factors: Sen. Bernie Sanders of Vermont has made legalizing pot a plank of his surprisingly successful run for the Democratic presidential nomination. Meanwhile, a petition by Democratic governors has led the Drug Enforcement Administration to say it will decide by July whether to remove marijuana from the nation’s list of most dangerous drugs.

Eidinger and other activists said they hoped Monday’s meeting might begin a conversation about marijuana reform that could provide cover to likely Democratic presidential nominee Hillary Clinton to continue work should she win the election in November.

Eidinger also tried to guilt and embarrass Obama into action. Fliers announcing the mass pot-smoking event outside the White House said the event was held not on April 20, the typical national day of action over marijuana policy, but earlier because of the president.

“Due to popular demand, we’re rescheduling 4/20 this year to 4/2 because Obama’s been a BIG ZERO on cannabis reform,” said the fliers.

In Eidinger’s last letter to Obama administration, he also offered to call off the spectacle if the president agreed to sit down or “bud summit” with marijuana advocates.

“As a former cannabis (and current?) user, you know firsthand that cannabis does not belong in the Controlled Substances Act,” Eidinger wrote.

But on Monday, both sides characterized the meeting as no more than a perfunctory listening session — and partly for good reason.

Since the meeting was with the Office of National Drug Control Policy, the administration officials present are not able to advocate for reclassifying marijuana thanks to funding restrictions imposed by Congress.

In a statement, a spokesman for the office played down Monday’s meeting: