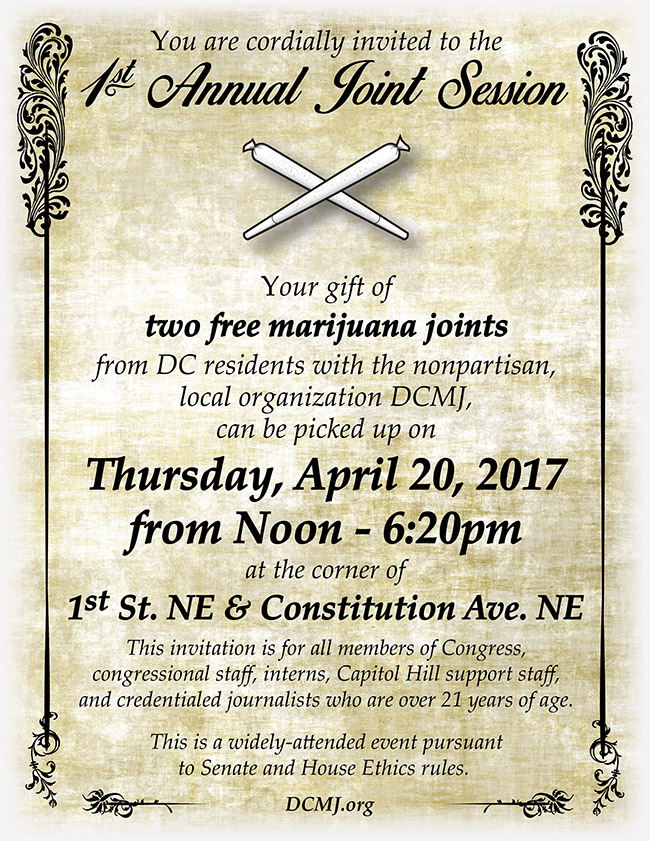 Marijuana advocates vow to smoke pot and get arrested on steps of U.S. Capitol

Dozens of activists, including some military veterans, plan to light joints Monday on the steps of the U.S. Capitol — federal land where committing the offense could draw a sentence of up to a year in jail — as part of an effort to urge a reluctant Congress to support marijuana legalization.

“Monday @ High Noon” reads a flier for the event, calling on Congress to also remove marijuana from the nation’s list of most-dangerous drugs. “Mass Civil Disobedience @ 4:20p — East Side of the US Capitol.”

Activists for the cause have flirted with arrest before, including smoking near the White House when President Obama was in office. But the April 24 event marks the first time activists plan to light up squarely on federal land — and against the backdrop of the U.S. Capitol dome, where the image may be hard for federal authorities to ignore.

It also would be the first significant protest to take place under a Trump administration that has suggested there would be greater enforcement of federal drug laws prohibiting the use of recreational marijuana than under the Obama administration.

“You can only ask nicely for so long before you have to change your tactic,” said Adam Eidinger, a co-founder of the advocacy group DCMJ. Eidinger said he is making sure his 13-year-old daughter will be taken care of and that his rent is paid in case he must spend an extended period of time in jail.

Eidinger’s primary mission is to push Congress to allow the District to fully enact a ballot measure approved by voters in 2014, to legalize marijuana for recreational use.

Seven in 10 D.C. voters backed the measure, which made possession legal, but left to District lawmakers was the task of writing rules to regulate and tax marijuana sales. Conservative House Republicans blocked local leaders from taking those steps, invoking Congress’s broad power over local District affairs to do so.

That’s left it legal for people in the District to possess marijuana, but not to legally buy or sell it, creating a gray market where people now grow it at home and barter and trade for pot.

“It’s silly,” Eidinger said. “We should legalize the activity that is already going on and give the District the ability to tax and regulate — it will raise money and make it safer for consumers.”

A spokeswoman for the United States Capitol Police, which has jurisdiction over the Capitol grounds, said in an email that “it is illegal to smoke marijuana on Federal property.” Eva Malecki, the spokeswoman, did not respond to a question about how the law enforcement agency might respond to the planned event.

Eidinger said he has not discussed the planned protest with police but has been in touch with authorities about another event scheduled for Thursday, a national day of pro-pot advocacy.

Eidinger’s group plans to distribute free marijuana joints to anyone with a congressional ID badge on a city street outside the Capitol. Under current law, possessing the joints on city streets is not a crime, but smoking it is.

The group has already rolled more than 1,000 joints and has dozens of volunteers ready to distribute them.

The measure, known as the Rohrabacher-Farr amendment, is scheduled to expire at the end of April.

U.S. Attorney General Jeff Sessions has said the benefits of medical marijuana may be overhyped and suggested that he may take a tougher stand on states that legalize. On Tuesday, Sessions added that marijuana “distribution networks” including in the D.C. area, promote gang activity.

Any mass arrests from Monday’s planned protest would be left to federal prosecutors in the District to handle. Channing D. Phillips, the current prosecutor, was appointed by Obama and has said he expects to be replaced.

Post Title: Washington Post: Marijuana advocates vow to smoke pot and get arrested on steps of U.S. Capitol
Posted in: Activism, Cannabis, In The News, News, Washington Post
Last edited by Nikolas Schiller on 5/18/2019 at 12:47 pm