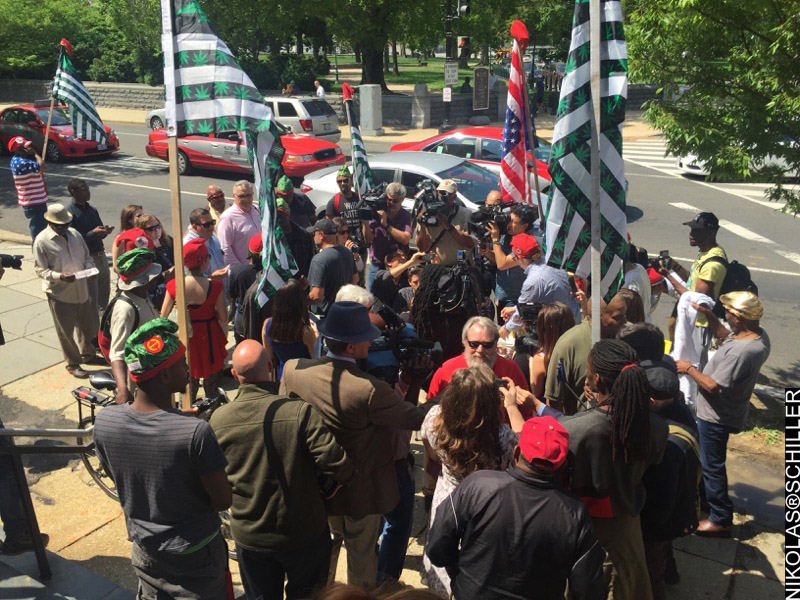 DCMJ co-founder Nikolas Schiller estimated that they had given away joints to around 100 people before police shut it down.

The U.S. Attorney’s Office of D.C. has dropped possession charges against a prominent pot activist stemming from a joint giveaway on April 20 near Capitol Hill.

Adam Eidinger, a cofounder of local cannabis advocacy group DCMJ, was one of eight people arrested by Capitol Police, who also confiscated more than 1,000 joints from activists who were handing them out to Hill staffers.

DCMJ, which planned the event, chose the corner of 1st St NE and Constitution Ave NE as the location for the giveaway because it’s technically D.C., not federal, land. While District law allows people to give away up to an ounce of marijuana under Initiative 71, federal law does not.

A statement from Capitol Police that day said that their officers began arresting people “after witnessing them distributing marijuana in public view to passersby at First and Constitution Avenue, NE,” citing federal law, under which it is illegal to possess marijuana.

The arrests began less than an hour after the giveaway did, though the event continued despite three separate waves of arrests. The giveaway did not end until Capitol Police confiscated the remaining marijuana. DCMJ co-founder Nikolas Schiller estimated that they had given away joints to around 100 people before police shut it down.

Ultimately, while all eight of the arrestees spent that night in jail, the U.S. Attorney’s Office only charged two of them—Eidinger and William Angolia. Both were charged with possession of a controlled substance under D.C. law, a misdemeanor punishable by a maximum of six months in jail and up to a $1,000 fine.

Eidinger had been hoping that being charged under federal law could lead to a legal showdown that would clarify whether D.C. or federal law reigned supreme in the District. But that did not happen.

The charging documents say that Eidinger was arrested with 78 rolled marijuana cigarettes, which equaled 2.06 ounces of marijuana, 0.06 ounces above the limit. Eidinger maintained that the weight included the papers and tips of the joints.

There are still charges pending against Angolia, says Miller. Capitol Police found a total of 2.405 ounces of marijuana in plant, joint, and bud form in his car, according to charging documents.

“I just want to know where I go to pick up my cannabis, and so does everyone else who was arrested that day,” says Eidinger. Another arrestee that day, Jessica Laycock, has filed a legal challenge against the Capitol Police to have the marijuana and vaporizer that officers confiscated returned to her, per The Post.

While DCMJ had intended for the 4/20 giveaway to be within the letter of the law (the organization has held other joint giveaways without incident), the group also held a smoke-in on Capitol grounds to advocate for pot legalization shortly thereafter that was intended as an act of civil disobedience.

Eidinger was among four people arrested during the event, which featured religious speakers talking about why they use marijuana before the toking began.

“Under federal law, it is unlawful to possess marijuana,” Capitol Police said in a statement, adding that the four adults would be charged with possession under U.S. law. (It’s also illegal to smoke marijuana in public under D.C. law.)

But Eidinger says he’s looking forward to that trial, which is slated to begin on September 11. He is planning for more than a dozen witnesses to present testimony that the smoking was First Amendment activity, and he has footage from the event taken by D.C. artist Robin Bell.

“We’re just gonna drag this trial out until the judge relents and accepts that, ‘Wait a second, this was spiritual,’” says Eidinger. “I’m not delusional—it’s a long shot, but i think we could win and it’d be tremendous.”

Post Title: DCist: Prosecutors Drop Charges Against Pot Activist Who Handed Out Joints Near The Capitol On 4/20
Posted in: Activism, Cannabis, DCist, In The News, News
Last edited by Nikolas Schiller on 5/18/2019 at 1:40 pm