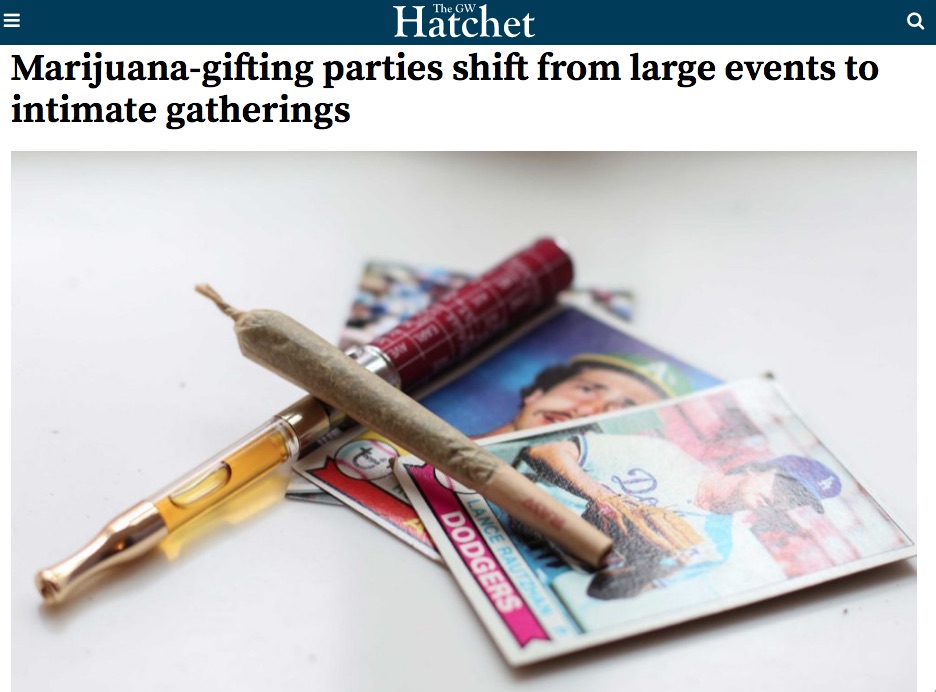 Nikolas Schiller, co-founder of the marijuana legalization advocacy group DCMJ, said even businesses and pop-ups who claim to be Initiative 71-compliant have a misunderstanding of the current law, as gifting is not a purely charitable exchange and some value in the deal has to account for the plant.

“Just because the government hasn’t cracked down on that doesn’t necessarily make it lawful,” he said. “So there’s a lot of businesses that are operating in a very gray area in regards to what they think is lawful.”

In a three-story walk up in Northwest D.C., a senior paid a $10 entrance fee to gain access to the second floor. After passing through security and climbing the stairs, they made their way to a closet-sized room consisting of three tables with vendors laying out their wares: marijuana nuggets in mason jars, wax cartridges and pens.

The event was one of the many gifting pop-ups in D.C., where vendors set up shop and gift free marijuana in exchange for an item of the drug’s value.

In the wake of increased arrests by the Metropolitan Police Department for distributing marijuana in recent months, the events that once had prominence in the District have died down. Business owners and attendees of the events said they’ve seen stricter enforcement of policies shutting down parties and are now left determining how they’ll shift their activities to comply with the law.

The senior studying biomedical engineering, who spoke under the condition of anonymity without exposing them to any legal ramifications, said it didn’t take long after searching for marijuana events in the District to find it, but when he arrived the address looked like every other house on the block. Outside, he said two “clearly high” men were holding a goodie bag with the Batman symbol.

Inside, all the inventory was stored behind tables in black garbage or grocery bags, and attendees were asked to “donate” to an object like a baseball card or a pair of socks, he said. With the item was a gift of a pre-rolled joint for $10 and a clip used for bags of chips. With three-for-one deals on edibles for $25 enticing him to buy more.

He said he spent $220 in total but vendors were quick to correct him when he asked to pay for the marijuana products.

“I said that to three different people, and they each corrected me saying, ‘Oh no, you’re giving me a donation and we’re giving you gifts,’” he said. “They were definitely very careful with their vocabulary.”

Rachel Reid, an MPD spokesperson, said under Initiative 71 that went into effect in February 2015, that it remains illegal for anyone to possess more than two ounces of marijuana, smoke or consume the drug in public space or transfer any amount for remuneration.

“We continue to hear from residents, businesses and members of the Council concerned about marijuana parties with potentially illegal activity being held at various establishments and residences throughout the city,” she said. “MPD’s job is to enforce the law, and we’ll continue to work with our regulatory partners to do so.”

A Virginia Commonwealth University student said the event he attended in January with GW students was held in Columbia Heights. He said inside were folding tables covered in items for sale like “raw weed” and nachos infused with marijuana by about 15 vendors. And outside, a security check was followed by a line with about 40 people jutting out the door, he said.

“It was a one in one out, so you had to wait for people to come out to go in,” he said. “So I guess they were at capacity.”

Joe Tierney, who runs the website Gentlemen Toker and reviews marijuana delivery services, said he expects that “flaunting” establishments – which currently host parties downtown with a line of about 50 people winding out the door – to be phased out. Tierney said he expects a rise of smaller cannabis-themed yoga or art parties, where the main draw isn’t just marijuana consumption.

Tierney said the pop-ups have already returned “back to the basements and backyards” like they were before soaring popularity spread them to more open venues like bars and restaurants. Prior to events being hyped on social media, the scene would consist of about two vendors gifting and a few chairs around a small venue, along with plenty of small talk and a tight-knit social circle, he added.

“That kind of went away as the events became more professional,” he said. “There was less of a community sense involved.”

He said the legal weed community is “exceptionally fractionalized” because various events go on across the city each day. This can help businesses in the market continue to run even as more events are shut down by police, Tierney added.

“They may hit up one or two, but there’s another seven or eight that are going to keep going,” Tierney said. “So at this point it’s kind of a numbers game.”

Nikolas Schiller, co-founder of the marijuana legalization advocacy group DCMJ, said even businesses and pop-ups who claim to be Initiative 71-compliant have a misunderstanding of the current law, as gifting is not a purely charitable exchange and some value in the deal has to account for the plant.

“Just because the government hasn’t cracked down on that doesn’t necessarily make it lawful,” he said. “So there’s a lot of businesses that are operating in a very gray area in regards to what they think is lawful.”

Schiller, who graduated with a bachelor’s degree in computer science and geography from GW in 2004, said delivery services that gift marijuana to individuals are still not following guidelines, but fly under the radar due to the personal nature of transactions in comparison to larger events. He added that other states like Colorado experienced similar issues in their first year of cannabis legalization.

Lately their events are tackling issues other than gifting pop-ups, because Schiller said the current state of the law bans commercializing marijuana. Instead the group is focusing on other local issues, like erasing prior charges for marijuana consumption or possession.

But DCMJ has previously hosted events – like handing out joints during the inauguration of President Donald Trump last year – to promote the full legalization of marijuana. During the first month of Initiative 71, DCMJ planned a seed share of more than 20,000 marijuana seeds at a D.C. bar, where there was “nothing running afoul with the law” because there was no consumption.

“We ended up having a line I don’t know how many blocks long,” he said. “Five or six blocks.”