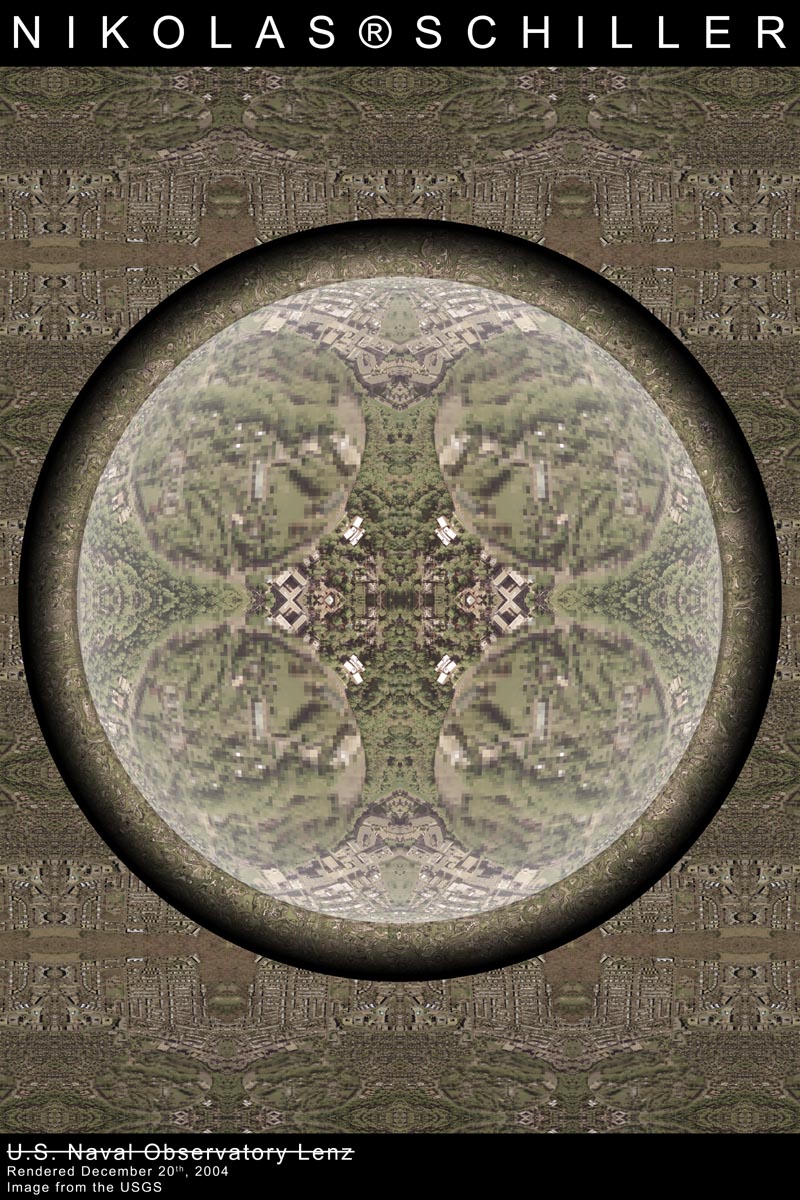 I used a strike-through font on the signature to make note of the fact that the beauty of this image is from redaction of the U.S. Naval Observatory (home of Dick Cheney). This is one of my favorite renderings yet!

Over the weekend I got little domain name crazy. After downloading another aerial photograph of DC from the USGS’s National Map, I found that Dick Cheney’s residence, the Naval Observatory, has been visually redacted- pixilated so that you cannot see the ground in detail. The U.S. Capitol building is too, and I wonder what else! Censored sounds cool, but redacted just has that sonic flavor of national security all over it. So I was going to register “visuallyredacted.com,” but that is too much of a mouthful and I ended up just using redacted as my base word. I ended up with https://redacted.name and https://redacted.us. Add those to https://revisit.us and I think I’ve come up with an interesting lexical mix of URLs. However, www.redacted.name is my favorite!

But I wasn’t finished… this entire weekend I dutifully spent working on the Inaugural Map. I bought both inauguralmap.com & inauguralmap.org blew about $40 on getting hosting for it, which has been a real pain in the ass. I’m definitely going to be getting my money back on the 29th day (30 day money back guarantee!).

As for the Map itself, I’ve added quite a few more layers: Public Access points on the parades route, Metro Stops (with special mouseover info), the street lines, the street names, and the parade route. And below the map I created another flash animation to be a portal for further inquiry. I made a dividing line between Red & Blue and put all the activist links on the Blue side and all the official inaugural links on the other side. Below it all I decided to add a link to the first ever Counter Inaugural Ball. I loved the byline, “Not just Republicans have Balls!”

Sunday night I had the opportunity to brainstorm with the person behind this event. He’s the man behind “ReDefeat Bush.” I found out about a concert/rally/protest he is organizing on the 6th of January outside of the Capitol building. If you’ve seen Fahrenheit 9-11, you most likely remember the opening scene in Congress where there was not one Senator that would stand up (Note- John Kerry didn’t, even as liberal as he is supposed to be). Rumor has it that right now there is some behind the scenes work on Capitol Hill to find that Senator. I mean everyone knows that the votes cast on electronic voting machines are synthetic votes. There have been election irregularities in just about every state that had them, but unlike paper ballots there are no digital hanging chads, no way to actually verify voter intent. So on January 6th, when both houses of Congress reconvene, the entire election’s legitimacy, Bush’s media dubbed mandate, can all become awash. The constitution states that the House will have to vote to elect the president, which means Bush will be the only president elected by both the Supreme Court and the House, and never by the people he is supposed to represent. Alas, I’ll be on my first business trip that day, in Maui of all places, but I hope some Senator has the foresight to stand up.

If you haven’t yet, please call your Senator and explain to him the important significance.