3 / 26NORTHWEST234EASTSOUTH
The Daily Render
by 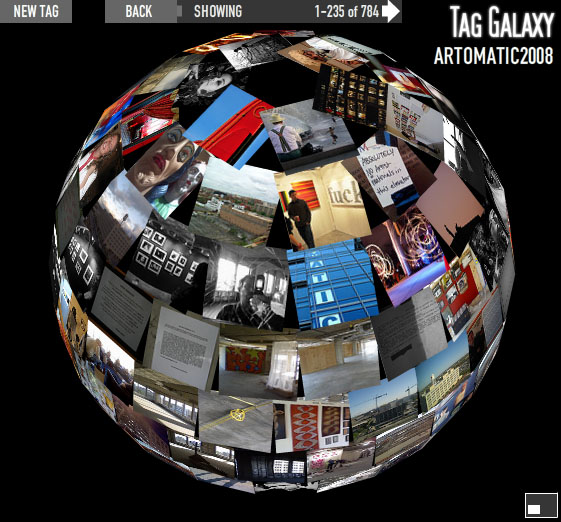 Tag Galaxy is an interactive viewing environment for Flickr photographs. While I am not a big fan of hosting my artwork on Flickr, I find some of the derivative applications intriguing. I like how this viewing environment has a limit on the number of photographs being displayed, but I don’t really like the lack of zooming in to the photographs. Its more of a thumbnail earth than a galaxy, but it’s fun to use. The image above shows a small sampling of the Artomatic 2008 photographs that have been uploaded to Flickr since the exhibit opened. [via] 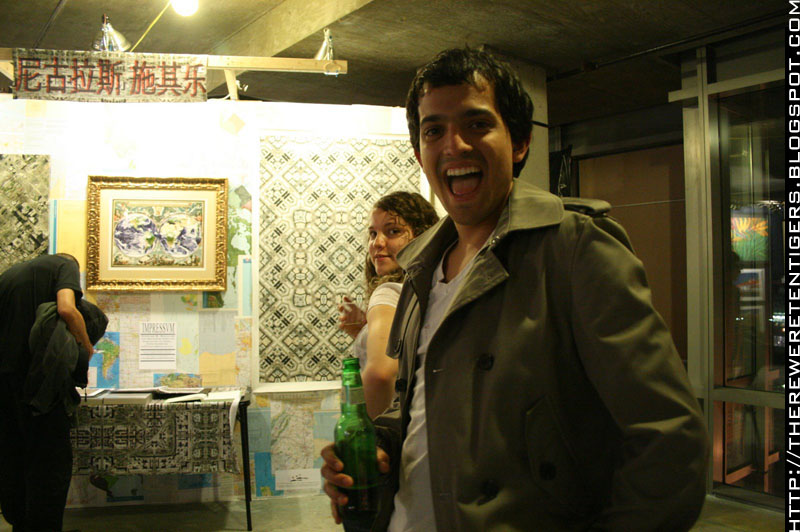 END_OF_DOCUMENT_TOKEN_TO_BE_REPLACED

I will be taking a brief break until Monday, May 5th. I’m working on a bunch of projects right now and I don’t think I’ll have much time to update this website! 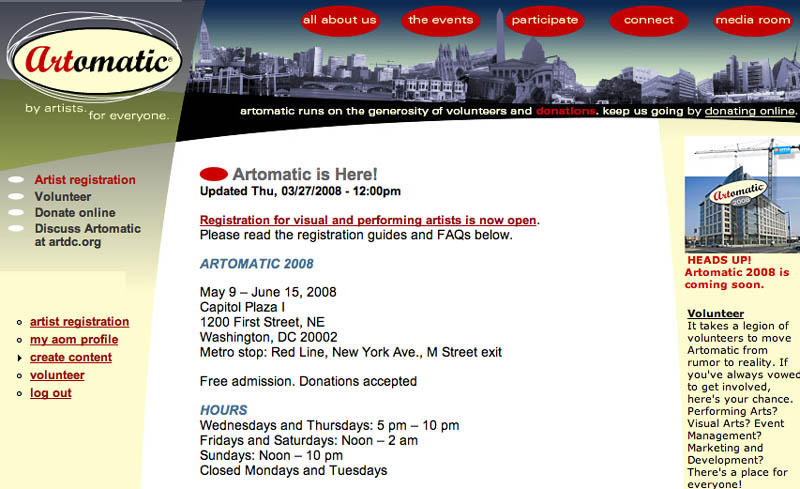 I urge everyone reading this in the DC area to click on the link above and register for Artomatic. Even if you don’t consider yourself to be an artist, I believe you are capable of making something by yourself, or with others, that is creative. Do not worry that you’ve never touched a paintbrush, tried photoshop, or even attended wood working class in middle school; Artomatic is the place to show off something of your creation, simple as that. Yeah you can try to make some money off your art, but there is no pressure to do so. At the root of it, and why I’ve been a fan throughout the years, is that Artomatic is about the democratization of art– you have a level playing field. There are few places where you can have artwork valued at thousands of dollars next to something someone decided to make on a lazy Saturday afternoon with their toenail clippings. This unique juxtaposition is what makes some art critics cringe, but others, including myself, have a field day because of the exposure to new art. At the end of the day, the only thing that matters is your participation.

Every year, the United Nations High Commissioner for Refugees (UNHCR) issues a report concerning the number of approximately 21,000,000 people worldwide falling under its mandate: as refugees who were forced to leave their countries due to war, political, racial or religious persecution, as internally displaced persons, or as repatriates on their way back home.

This interactive visualization attempts to give an insight into the phenomenon of global flight and expulsion, based on the annual UNHCR statistics between the years of 1995 and 2004.

Last year Christian Behrens, a new media designer based in Berlin made this interactive Flash map. While I *really* like the map’s concept, coding, and visualization method, I have some issues with the cartographic layout. Specifically, it’s hard to accurately locate some countries with my mouse and since there is no scaling on the text or basemap, its hard to find countries that are typographically overlapping. Moreover, the country’s dot is the only hotspot that triggers the UNHCR data, so if you are hovering over the words, you are literally missing the point. For example, I wanted to find the Gaza Strip and realized the point where my mouse is located is not on Gaza. This also happened with Sri Lanka, whereas the dot is over water. Just south of Sri Lanka, not far from the Maldives. My favorite country on the map is Stateless (below). With that aside, I found this map to be very informative.
END_OF_DOCUMENT_TOKEN_TO_BE_REPLACED 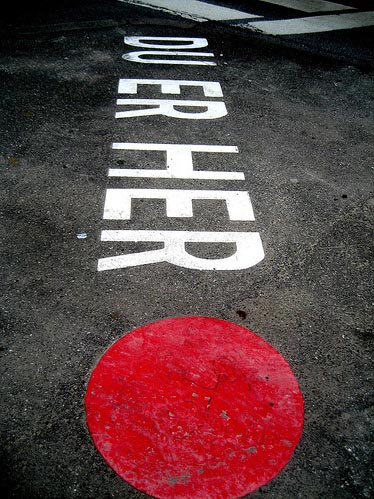 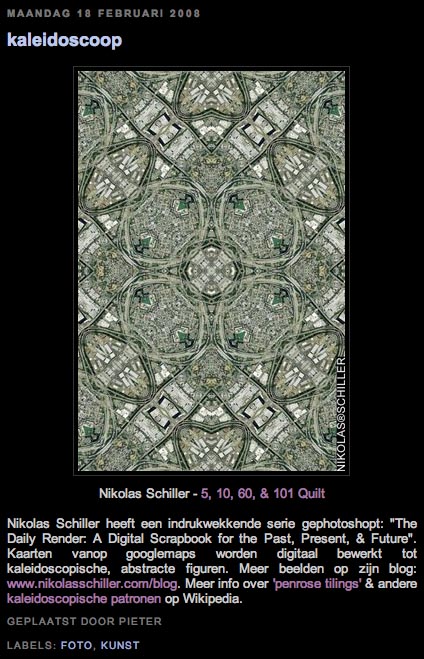 I always love finding blog entries in other languages. Today I want to learn Dutch! I sent the text on to my Dutch brother-in-law to see if Google’s translation (below) was accurate.
END_OF_DOCUMENT_TOKEN_TO_BE_REPLACED

For the last three weeks or so, I’ve been only publishing here once a week or so. Instead of daily or near-daily posts, I’ve been publishing the entire week, all seven days worth, at once. This weekly delay allows me to edit, reflect, and concentrate on other aspects of my busy life, but still showcase what I’ve been working on and thinking about. When read at a later date by an uninformed viewer, it would appear that I blogged every day, but since I can edit the dates and times of every blog entry, I only need to publish once a week. In doing so, I’ve realized how malleable digital time can be. I frequently hide old posts or edit them when I find misspellings and grammatical errors (there are plenty!) . The way I see it, this geovisual scrapbook is an ever-evolving digital presence that reflects aspects my life that I feel worthy of documenting, and more importantly, aspects of my life that I want remembered for later. There is sooooo much that I don’t share here and I’ve considered having a separate public blog to showcase other dimensions of my life, but I’ve come to the conclusion that I’ll do it when it when the time comes. I’m still an American citizen without a formal voice in the affairs of my geography and maybe when that Juneteenth comes (if it ever comes in my lifetime) this website will become public. After all, time is malleable. In the meantime*, I’ll still be tweaking aspects of this scrapbook and will continue to be publishing content as time permits.
END_OF_DOCUMENT_TOKEN_TO_BE_REPLACED

A Friendster Testimonial from 2003 predicting this event (sorta)

So I met someone a few weeks back and I was looking at her MySpace page’s comments section. I instantly learned quite a bit more information that I really cared to learn about that person. Upon realizing that I didn’t want that type of passive sleuthing to be available within my digital sphere, I decided to go through and remove all 677 comments on my MySpace profile that have accumulated over the last 5 years.

Yet those digital memories are not gone forever, rather, I went through and saved the HTML of every page of comments. I think I might illegally post them to an unlinked folder on this website for safe keeping. Reading over all them was quite cathartic to say the least— old friends who I don’t see anymore, ex-girlfriends, memories of past parties, and my favorite, the lexical migration from Friendster’s testimonials to inane discussions to people’s e-flyers. All I can say is that MySpace is one of the finest data mining operations on the internet and I’m happy there is now a little less data to be mined.

For the last 7 months I’ve been working on a digital art project related to some ambiguous content I’ve found on MySpace. I have over 100 different images I am going to collage together. Its going to take awhile, but I think the result will be a striking indictment on MySpace’s decline in popularity. 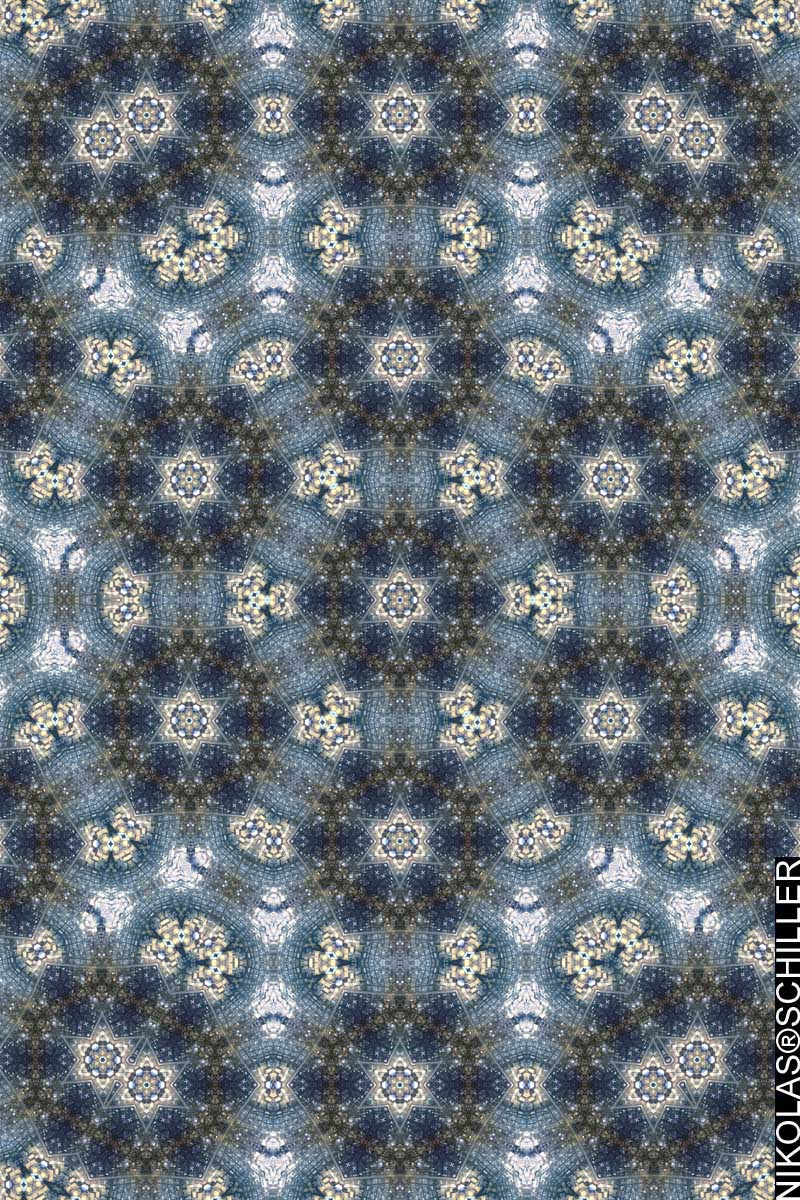 After praising the canvas prints I recently received, I decided to order two more maps. The way I see it is that these maps will be paid off using the grant money because they are not cheap!! They should arrive in a couple weeks and with their arrival I am going to shuffle the artwork on the walls of my house around. I now have more work ready to hang than wall space available in my house!

I chose the Superdome Quilt – 1st Derivative #2 (or just Superdome Quilt #2) because it’s been Imagekind Curator’s Pick for awhile and because I think it fits the “Mars Gravior Sub Pace Latet” concept I’ve been playing with recently. I also chose Charlotte Spheres simply because I really want to see what it looks like printed out. The optical experimentation on that map should show up very nicely. Both will printed at 32″ x 48″ on Epson Piezo Pro Matte Canvas. This is the largest size that Imagekind has for stretched canvas.