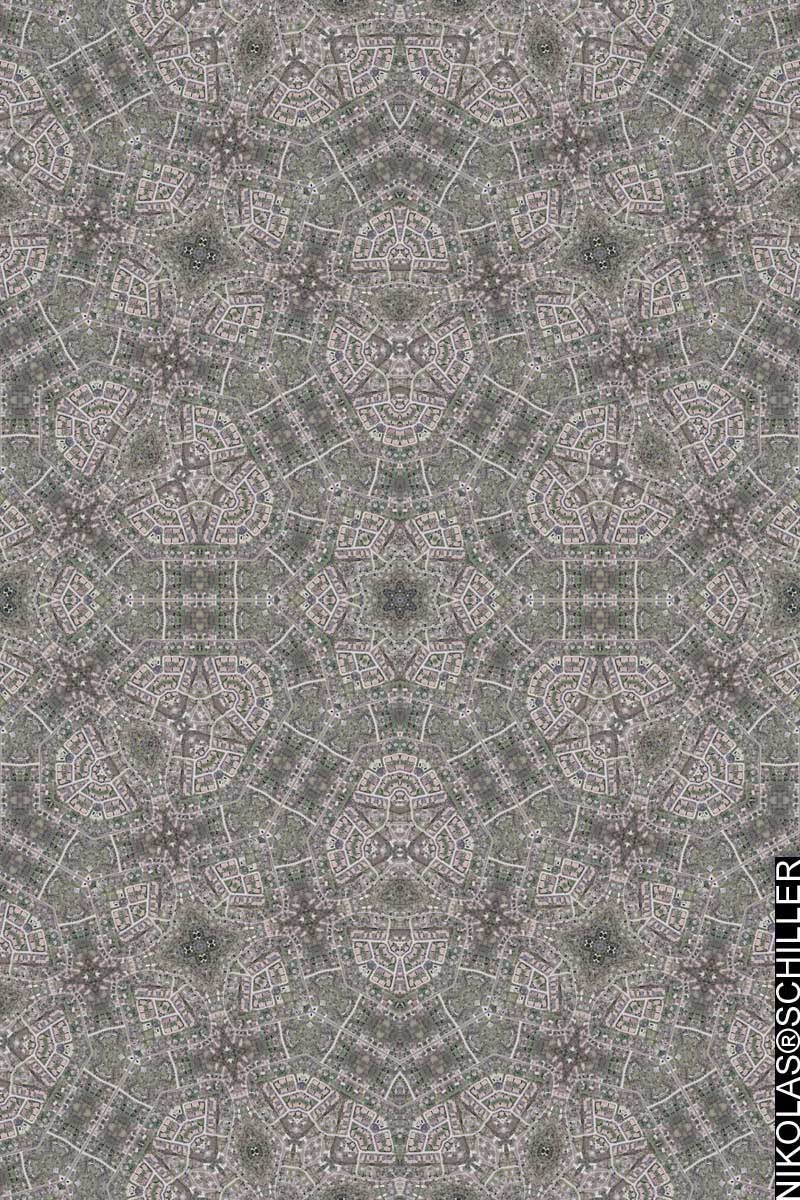 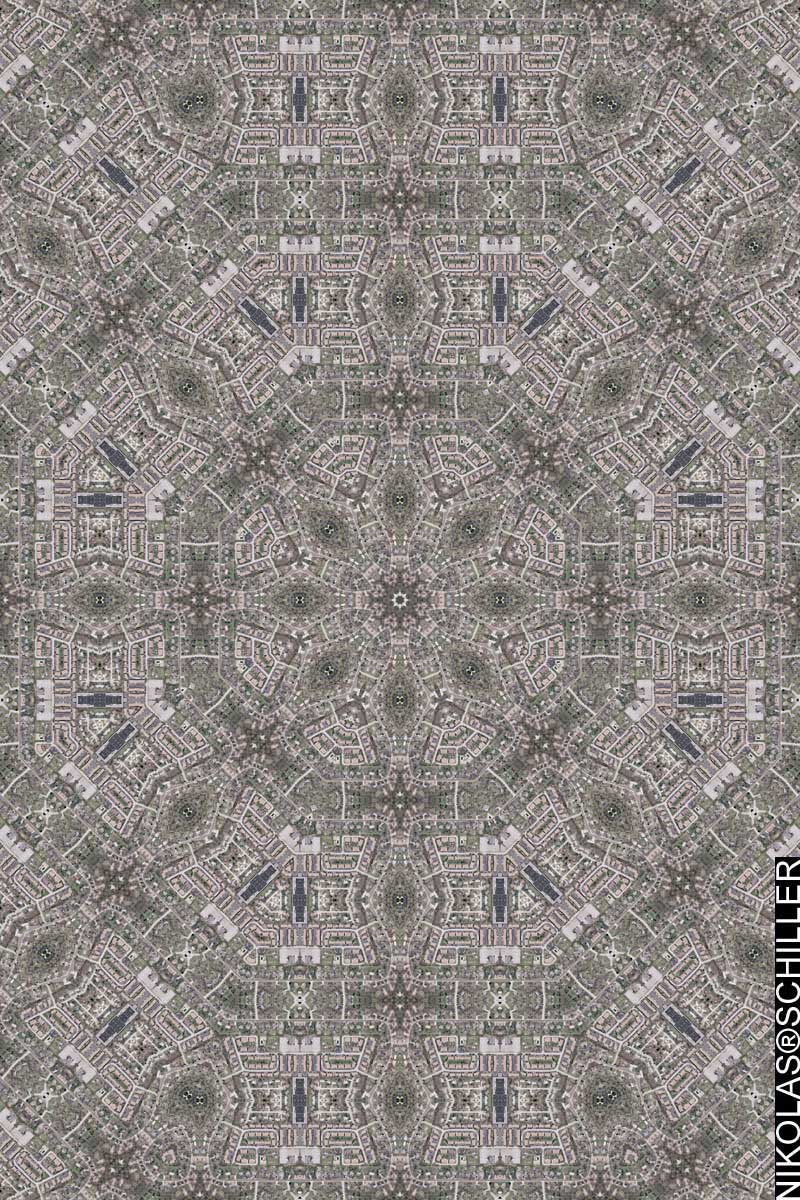 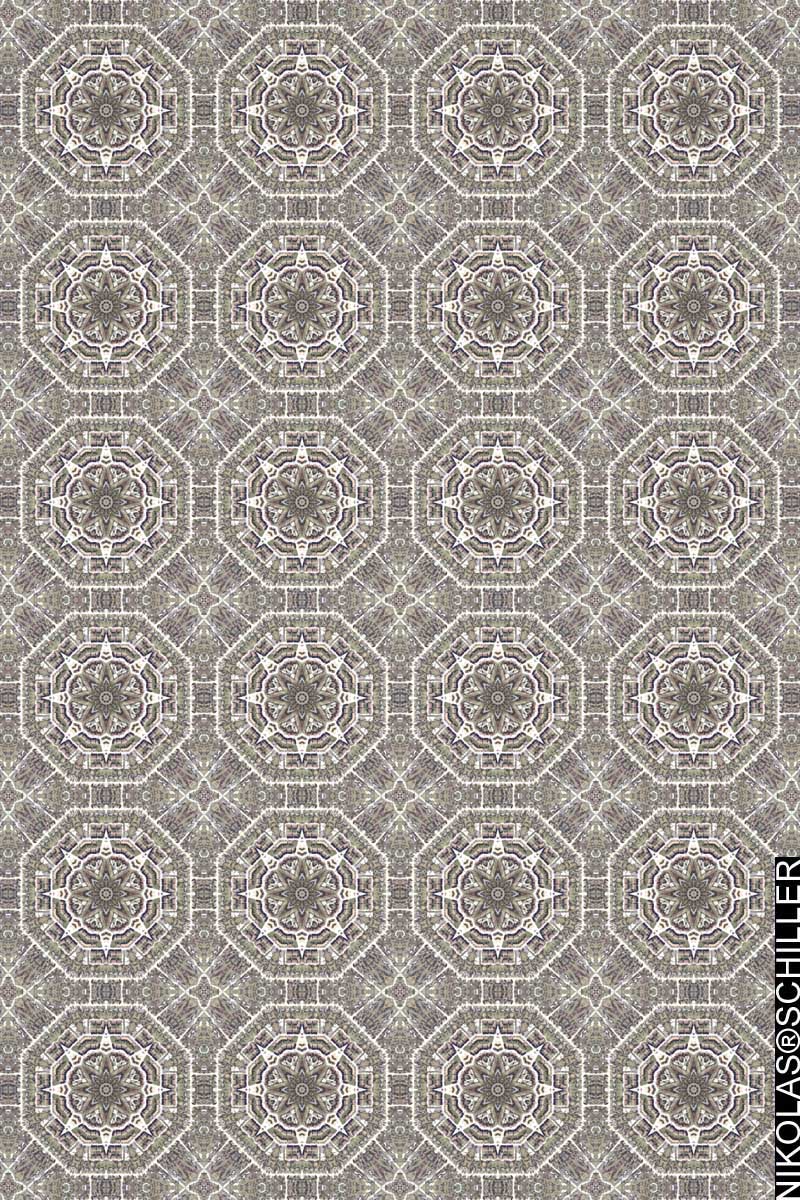 This is my fourth rendering of my childhood apartment in Ballwin, Missouri. While I really like the way the quilt looks, shortly after I started the rendering I realized I could have just as easily made this image in Photoshop. The modified imagery I used was the first derivative of the Ballwin Lenz #2 and what I’ve realized is that since the imagery was derived from a previous rendering that already has the axis’s of symmetry embedded within it, the current template will not reflect the imagery to create a noticeable result.

Basically I am trying reflect something that has already been reflected and it is not going to bend anymore unless I modify the first derivative imagery to an extant that the future line of symmetry will be on a seam that I have not used yet. The first derivative used in this rendering was originally reflected at 45 degree intervals (0,45,90,135,180,225,270,and 315 degrees) so for it to be further reflected I need to either rotate the source imagery or reflect the imagery at an angle that divides into 360 evenly and doesn’t fall on the same degrees as the original. My only second derivative work, rotated at 12 degree intervals, but the final result is a bit too busy for my taste. I am really fascinated by this imagery discovery that I’m working on :) Science + Art = Beauty 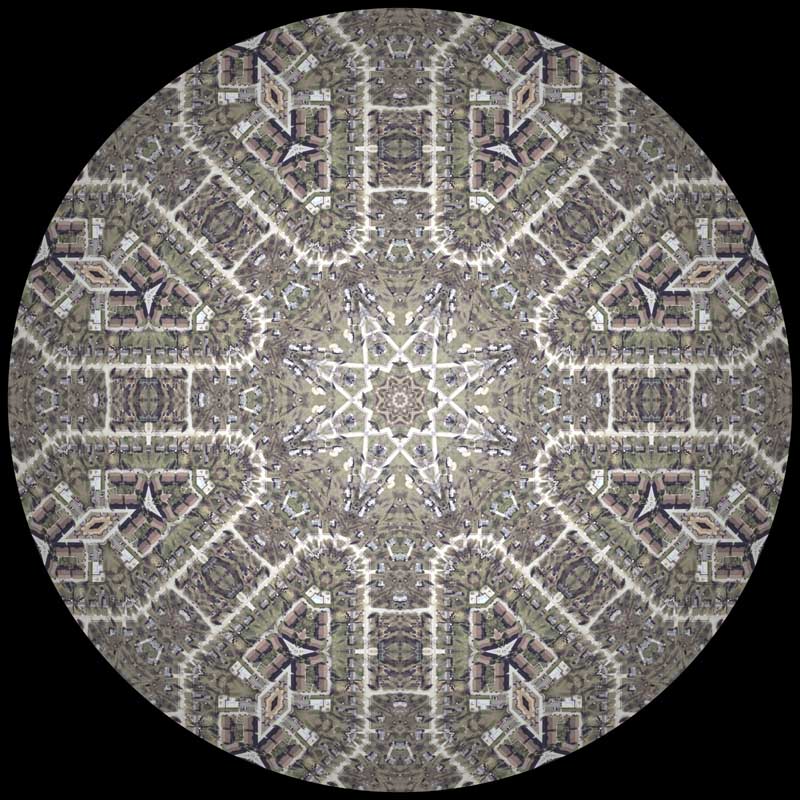 This rendering turned out nicely, although I rendered it too large and had to scale down the projection to remove some pixilation. This rendering is also the first derivative of the Ballwin Lenz #2, and I was able to keep my old apartment building at 148 G Cumberland Park Ln. within the rendering. You gotta love art that hits close to home! (I say this everytime!!!!) 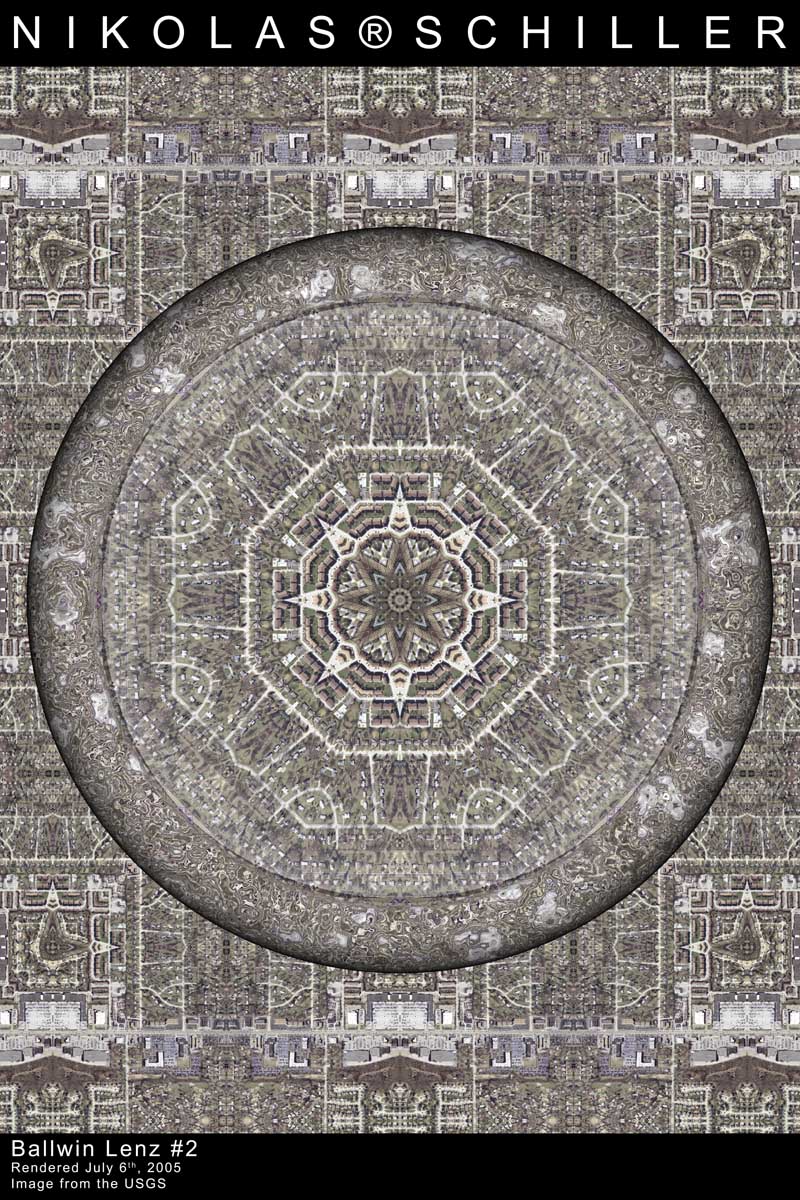 My mother received her print of Ballwin Lenz a few weeks back and left a message on my phone about how much she loves it. She said she got out a map and was able to find the our old apartment building in the image. Hearing about her doing this I felt compelled to make a second rendering!

Using the same style as the “Mandala Project,” on the inside, I placed the 6 way reflection inside of the “Lenz Project” template, and I absolutely love the way it turned out. My old apartment building is all over the center of the rendering! Nothing hits home, like your old home :-) I guess you could also say that around the center is the true Star of Ballwin (or I’d like to think!).

Read my entry on the first Ballwin Lenz. 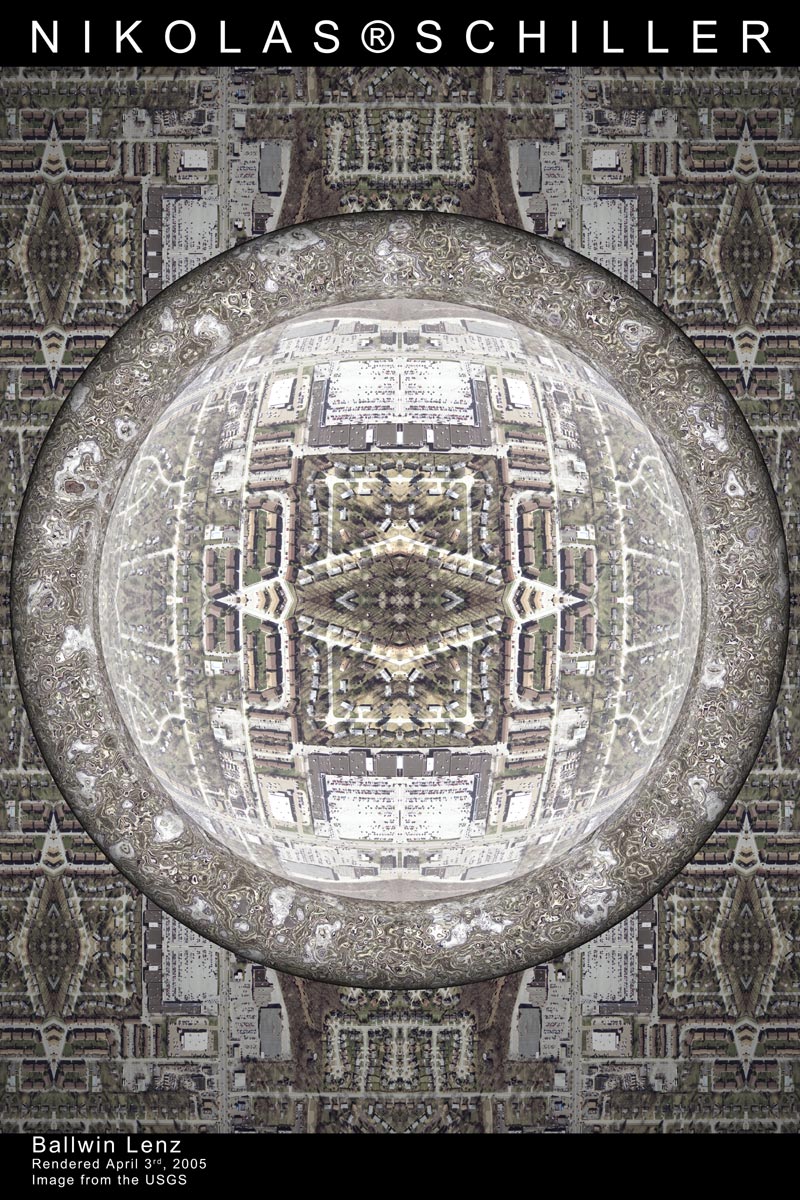 I grew in that rendering. From 1985 until 2002 my family resided in a 3 bedroom, 2 bathroom apartment in the Burtonwood Manor Condiminiums and paid a grand total of roughly $530 a month. I spent much of my formative years here and it holds a truly special place in my heart. I know that I can go back there and still see some of the folks I grew up with. Spaces and places will change, but the memories still remain. I think this my favorite rendering yet, simply because subject not only hits close to home, it is home.

My mother has the first print of this rendering :-)

The National Oceanic and Atmospheric Administration has got a great index of high resolution images of Hurricane Ivan’s destruction. If you have a minute check them out! There is also another page that has images of the actual path of destruction. I’ll be rendering a few of these shortly….Thank you NOAA!

This rendering is similar to the last one, but it has 4 times as many spheres place around it. Its too bad that 1024X768 doesn’t do the rendering’s overall detail much justice.

The folks at Comedy Central were annoyed when Fox News Channel’s Bill O’Reilly kept referring to “The Daily Show” audience as “stoned slackers.”

So they did a little research. And guess whose audience is more educated?

Viewers of Jon Stewart’s show are more likely to have completed four years of college than people who watch “The O’Reilly Factor,” according to Nielsen Media Research.
…
Comedy Central had no statistics on how many people watch “The Daily Show” stoned.

Sometimes the people that make the best fake news get away with making great news. I wonder how many people watch either show on a given night, because that would validate the research somewhat more. I am also looking forward to watching the debate this week. I noticed within the last two weeks that Karl Rove has changed Bush’s stump speech format in order for him to appear more like Kerry on the TV screen. Bush now has a talking points podium, which allows him to pace around the stage and come back when to the podium when he needs to say another repetitious republican phrase. The on the job training is working out for him too. Most of the camera shots put him above the podium so that the average viewer would not even notice the presence of the stand. Do a comparison with Kerry as he talks on his feet, you’ll notice a far superior intellect.

I am waiting for Move On to use Bush’s “We are not into nation building” comment and use the whole flip flop argument against Bush. The other day on TV I saw some dolt with a pair of massive 6ft tall flip flops. This idiot should be running around the country campaigning for Bush like the Yes Men.

Anyways, this rendering is of my hometown of Ballwin, Missouri. It’s located about 30 miles west of downtown Saint Louis in the republican controlled territory called West County. I used the glass spheres on this rendering instead of a torus. I just placed them around the page in an organized geometric fashion. The next rendering will consist of the same format & satellite image, but will contain many more spheres.