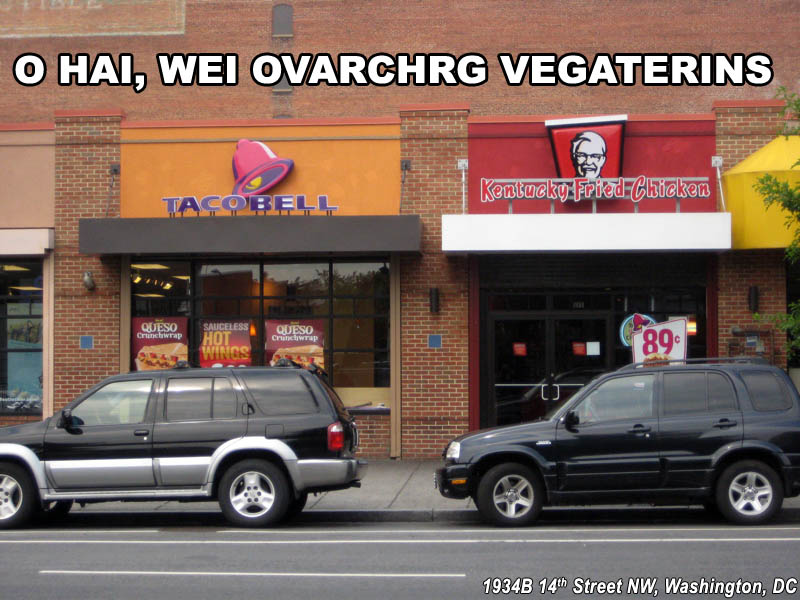 My second official job when I was in high school was at my neighborhood Taco Bell in Ballwin, Missouri. Starting when I was 17, my friends and I would work evenings & weekends and, generally speaking, had a great time at “Taco Smell.” I’m not going overshare the details of why we had so much fun, but it was the first and only time since that I’ve worked side by side with my best friends.

My specialty was customer service, which was really my rationale for not having to make the food. Instead of being a slave to the food assembly line, I worked the front counter and the drive-through and was able to bypass having to learn how to prepare the food and getting dirty. In our heyday, our Taco Bell was the fastest in the region because we were treated fairly, paid decently, and everyone was friends. We also had a clock above the drive through that showed our average time so we could work against the morning shift to prove that evening shift did their orders faster.

In many respects it was kind of like a Utopian factory in which we diligently did our job at just above minimum wage (I was making $6.40 an hour) and in the process generated some very fond memories while in high school. From climbing up to the rooftop and throwing hot sauce packets on the busy street & watching them pop to giving the police officers free food, in essence, our Taco Bell was composed of a small army of teenagers who worked hard and played harder.

As the customer service specialist, I knew my way around the menu forwards & backwards and could blindly take someone’s order using the touch-screen register. Every once in awhile we’d get an Indian family who’d request their food to be completely vegetarian and we’d adjust their order accordingly.

There was a specific button on the register that we’d use to reflect this dietary adjustment and we could always tell the new employees apart from the older employees based on whether they’d use this button or not. The cryptic text on the button was simply SBBN and it stood for Substitute Beans, which meant that for any food item that was ordered, the meat would be substituted with beans. The new employees would always type in “-MEAT +BEANS” and we’d always have to correct them because the “+BEANS” would mean that the customer would be charged extra because they would be getting extra beans added to their order and not a substitution. This simple button is the why I am writing this entry today.

Since I switched up my diet about 6 years ago and removed meat from my daily intake, I’ve stopped going to 95% of fast food restaurants. Their combo meals are based on a meat-centric diet and without the desire to consume most of what is for sale, I’ve simply found no reason to go to most fast food restaurants. However, sometimes when I am traveling fast food is the only option, or sometimes when I’m out with a group of friends I get suckered into coming into a fast food restaurant with the group. I’m not one to proselytize my dietary beliefs, so I will just order French fries (which are usually fried with the chicken strips) and whatever is not a product that explicitly contains meat. Over the years I’ve learned how difficult it can be to go through the menus and find a full meal that does not contain meat. However, there is still one fast food chain that a vegetarian can get a full meal with little effort- Taco Bell.

The other week I was hungry, bored, and hadn’t purchased groceries in awhile, so I decided to make a visit to my nearest Taco Bell. Located near the intersection of 14th & U streets in Washington, DC, at the heart of the U Street Corridor, this Taco Bell is a Yum! Brand Inc. dual restaurant franchise, which contains a KFC and a Taco Bell (see photo above). This allows customers the opportunity to purchase chicken wings and a burrito. In other cities Yum! Brand Inc. has paired Taco Bell with Pizza Hut or A&W Root Beer or Long John Silvers (or different combinations therein), all with the notion that more sales can be generated when there are more culinary options available. In fact, Yum! Brands Inc., based in Louisville, Kentucky, is the world’s largest restaurant company in terms of system units, with approximately 33,000 restaurants around the world. 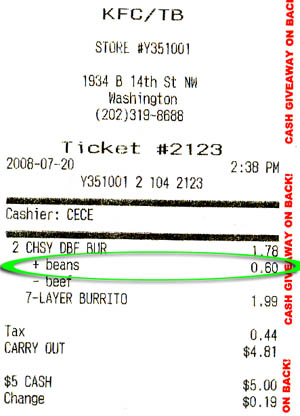 However, the Taco Bell nearest to my residence does not operate like the Taco Bell of my youth. There is no SBBN option on the cash register and when I purchased a burrito sans beef filling, I was charged 30 cents extra for the beans. When I approached the manager about this discrepancy, he simply told me that this Taco Bell doesn’t do free substitutions.

On the surface, I can understand why they’d not want to deal with substitutions because it causes the food preparers to do slightly more work. But below the surface, vegetarians are being charged more for less. The environmental aspects of choosing a burrito without beef is akin to a dietary carbon offset. The amount of water and grain used to feed the cows prior to their slaughter is greatly reduced by lowering the demand for beef. Thus its actually cheaper for Taco Bell to serve their customers beans instead of meat because the beans only require space, sun, water, and probably pesticides to mature & be harvested, while the cows require space, sun, water, grain (which in itself requires the same farming protocols as the beans), antibiotics, and a slaughterhouse before arriving in your burrito. So why charge customers more for something that is better for the environment and costs less to produce?

I called up Taco Bell’s 1800 number (1-800-TACO-BELL) to inquire about the discrepancy between the Taco Bell of my youth and the Taco Bell near my house. The official response is that Taco Bell does not have an authoritative position and its up to the individual franchises to give the substitution option to their customers. Thus you can go to one Taco Bell and get beans instead of meat on all your items free of charge, or go to the Taco Bell nearest to my house and be charged 30 cents for each substitution, and in the eyes of Yum! Brand Inc. there is no problem with that.

Frankly, I wholeheartedly disagree with this concept. If the customers is always right, then being charged extra for less is fundamentally wrong. I will be boycotting this Taco Bell until they’ve changed their position and I urge my neighbors to do the same. For those reading this outside of Washington, DC, I urge you to ask the customer service specialist if you are charged extra for the substitution of meat for beans and if you are, kindly state your issue with the practice and leave the establishment.

At the end of the day, its the profits that Yum! Brand cares about, not the environment or even what an annoyed vegetarian thinks. Yet I strongly believe that it would be in their best interest to make an authoritative position on the matter. Until then, I’ll be making my own burritos, buying burritos from other establishments, and when I happen to visit a Taco Bell that overcharges me for less, I’ll raise my voice within the restaurant and make a scene, so that all customers present will know that Taco Bell is ripping off vegetarians. I urge you to do the same.

Now I like these lists as much as the next person does, but I really wish the “facts” were cited somewhere or had some authorative author…. Nonetheless, I’m glad I’m a veggie :)

Here’s why you shouldn’t eat meat. Pick one argument and read it. If you’re not satisfied, read another… maybe you will all be able to get the point.

Cause of global warming: greenhouse effect
Primary cause of greenhouse effect: carbon dioxide emissions from fossil fuels
Fossil fuels needed to produce meat-centered diet vs. a meat-free diet: 3 times more
Percentage of U.S. topsoil lost to date: 75
Percentage of U.S. topsoil loss directly related to livestock raising: 85
Number of acres of U.S. forest cleared for cropland to produce meat-centered diet: 260 million
Amount of meat imported to U.S. annually from Central and South America: 300,000,000 pounds
Percentage of Central American children under the age of five who are undernourished: 75
Area of tropical rainforest consumed in every quarter-pound of rainforest beef: 55 square feet
Current rate of species extinction due to destruction of tropical rainforests for meat grazing and other uses: 1,000 per year

Here’s to your health!