After having a rather rough start to this year’s only Friday the 13th, I decided to scour Chronicling America for articles related to this age-old superstition. 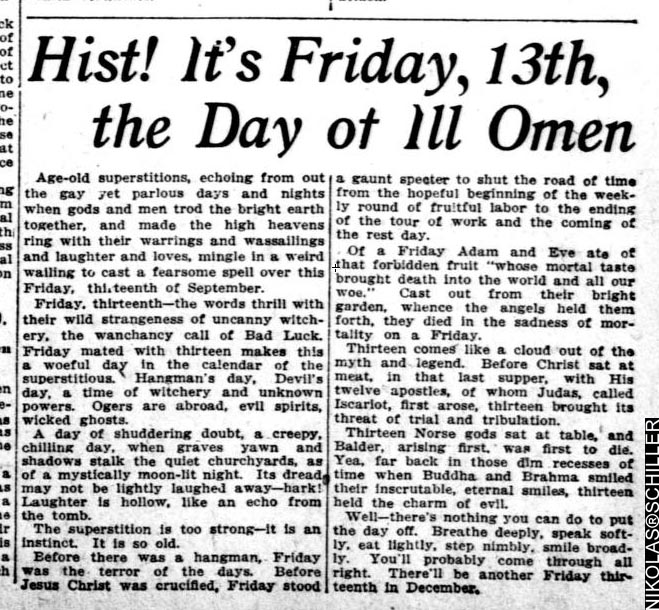 Age-old superstitions, echoing from out the gay yet parlous days and nights when gods and men trod the bright earth together, and made the high heavens ring with their warrings and wassailings and laughter and loves, mingle in a weird walling to cast a fearsome spell over this Friday, thirteenth of August.

Friday, thirteenth- the words thrill with their wild strangeness of uncanny witchery, the wanchancy call of Bad Luck. Friday mated with thirteen makes this a woeful day in the calendar of the superstitious. Hangman’s day, Devil’s day, a time of witchery and unknown powers. Ogers are abroad, evil spirits, wicked ghosts.

A day of shuddering doubt, a creepy chilling day, when graves yawn and shadows stalk the quiet churchyards, as of a mystically moon-lit night. Its dread may not be lightly laughed away-hark! Laughter is hollow, like an echo from the tomb.

The superstition is too strong– it is an instinct. It is so old.

Before there was a hangman, Friday was the terror of the days. Before Jesus Christ was crucified, Friday stood a gaunt specter to shut the road of time from the hopeful beginning of the weekly round of fruitful labor to the ending of the tour of work and the coming of the rest of the day.

Of a Friday Adam and Eve ate of that forbidden fruit “whose mortal taste brought death into the world and all our woe.” Cast out from their bright garden, whence the angels held them forth, they died in the sadness of mortality on a Friday.

Thirteen comes like a cloud out of the myth and legend. Before Christ sat at meat, in the last supper, with His twelve apostles, of whom Judas, called Iscariot, first arose, thirteen brought its threat of trial and tribulation.

Thirteen Norse gods sat at table, and Balder, arising first, was first to die. Yea, far back in those dim recesses of time when Buddha and Brahma smiled their inscrutable, eternal smiles, thirteen held the charm of evil.

Well- there’s nothing you can do to put the day off. Breathe deeply, speak softly, eat lightly, step nimbly, smile broadly. You’ll probably come through all right. There’ll be another Friday thirteenth in December.