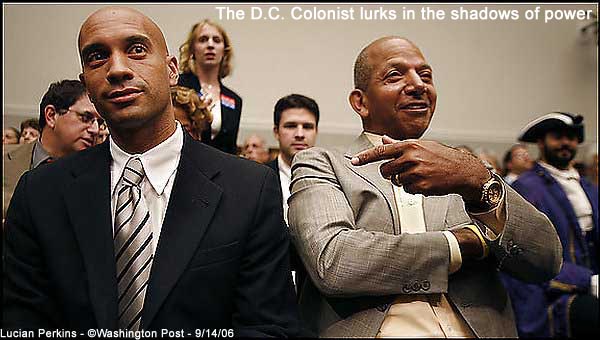 I’ve been at odds with DC Vote for years. While we are on the same side regarding the importance of congressional representation for DC residents, I’ve been quite dissatisfied with their approach toward bringing true equality. As an ardent supporter of statehood, I’ve been annoyed that DC Vote has been a puppet of the Democratic Party and has wantonly gone after partial representation instead of full representation.

Last year I modified their logo to create a 1/3 fraction because of their support for the constitutionally dubious Norton-Davis bill that would give DC a token vote in the House of Representatives, but no representation in the Senate, or 1/3 representation. This was followed up by a nice phone call from the executive director of the organization asking me nicely to not screw around with their copyrighted logo (free speech rules!). I even created multiple designs of the DC Flag that had only one out of the three stars filled in to show my fractional contempt. However, my best creation was the modified DC license plate that said “TAXATION WITH 1/3 REPRESENTATION,” which was ultimately mentioned in the Washington Times.

Worse is that DC Vote has been able to conflate “voting rights” with “statehood” in public discourse to the point that people use the words “voting rights” incorrectly. The inherent irony is that they’ve been advocating for a voting right (singular) because they are staunchly in favor of giving Delegate Eleanor Holmes Norton *a* vote in the House. In my opinion, “voting rights” (plural) involves DC residents having Congressional representation in both the House and the Senate. I remember when we marched at last year’s rally, I had to stop people from chanting “Give us the vote” because they were naively advocating for partial representation when we were holding a large flag that said “DC STATEHOOD NOW!”

Earlier this afternoon I noticed an advertisement on Wonkette for “Dr. Bill” and after clicking on it I was brought to DC Vote’s website to watch a flash version of the video above.

Frankly, I really like the video and that’s why I am posting it here today. With my reservations about DC Vote aside, I actually like this video as a means for explaining the disenfranchisement of DC residents. There is no mention of any constitutionally dubious legislation, rather its a simple & straightforward video that makes a strong case for giving DC residents representation in Congress while making fun of America’s worst president.

If you are reading/watching this from outside of Washington, DC, please share this video with your friends. If you think “change” is coming to Washington, maybe it should start with the enfranchisement of DC residents.