Above is a series of screen grabs showing Google’s webcrawler traversing my blog. From this robot’s data collection, the harvested content makes its way into Google’s servers, and ultimately into your search results.

This morning I received an e-mail from Timothy Cooper announcing that his Op-Ed was published today in the Washington Times (below).

After I read the article, I went on to do my morning IP analysis, and guess who visited my website looking for more information? None other than the Singaporean government. The very same government the Op-Ed was written to agitate. Examples like this prove that we really do live in a small world, while at the same time showing that human rights transcend borders.

Indicted for violating the Miscellaneous Offences Act for assembling peacefully without a permit to register their concerns over escalating housing costs, they claim that they’re innocent by virtue of their right under the Singapore constitution to enjoy the guarantees of freedom of assembly and expression. Historically, however, Singapore has viewed political dissent through a lens darkly, treating protest as a threat to social tranquility and economic prosperity, rather than what it is — a fundamental right and necessity in any democracy.

While Singapore claims to be a constitutional democracy, it nevertheless routinely arrests Singaporeans for attempting to assert those rights articulated under the constitution in the open light of day. A democracy, it’s not quite.

Ironically, while their trial is about their right to public assembly in numbers more than four without a permit, and to free speech, they view it as a test about whether Singapore’s judiciary is independent enough to interpret the country’s constitution objectively. In effect, Judge Chia Wee Kiat, who’s presiding magistrate over the case, is on trial, too. Many Singaporeans will be watching how he rules. Americans should be watching, too.

That’s because Singapore’s Minister for Home Affairs, Wong Kan Seng, appears to refuse to be bound by the affirmative rights guaranteed under the country’s basic law. Last February, he stated that “[w]e have stopped short of allowing outdoor and street demonstration â€¦ Our experiences in the past have taught us to be very circumspect about outdoor and street protests.” His reference is to the race riots in Singapore during the 1960s — almost 50 years ago. Which is like saying that because Washington, D.C. experienced race riots in the 1960s, the residents of Washington must be denied the right to protest government policies. That argument simply doesn’t wash.

But the judge in the case will likely rule accordingly, regardless of the plain language of the constitution.

The late Singaporean politician, Joshua Benjamin Jeyaretnam, stated in an interview shortly before his death that his main concern was that the public had the “perception that its judiciary was not independent.” He himself had been made a bankrupt by defamation lawsuits filed against him by his political opponents and the high damages awarded them by Singapore courts. After paying off his debts, he’d recently committed to heading a new political party, whose primary agenda was calling for the independence of the judiciary.

He was not alone. In July, the International Bar Association (ABA) issued a 72-page report on the state of Singapore’s judiciary noting that “there are concerns about the objective and subjective independence and impartiality of Singapore judges.” The report’s final recommendations advocate tenure be granted Singapore judges and that the transfer of judges between “executive and judicial roles” be banned. They also call on the government to prohibit defamation as a criminal offense, and forbid public officials from initiating criminal defamation suits, which detractors claim are used by government to silence its critics.

One of those critics is Chee Soon Juan. He’s been jailed seven times on a potpourri of politically-related charges, including speaking without a permit, contempt of court, and even for attempting to depart Singapore in order to attend an international rights conference. He’s been fined nearly $1 million to date and made bankrupt by defamation suits brought against him by former Prime Ministers Lee Kuan Yew, Goh Chok Tong, and Singapore’s current Minister Mentor, Lee Hsein Loong. In the next few months, he faces six more trials and an indeterminate amount of jail time. Yet all he wants is for the courts to properly enforce the spirit and letter of the Singapore constitution. Barred from leaving the country, he’s been put under country arrest and is a prisoner of conscience.

Were the Singapore 18 living in China or Russia, they’d be enjoying considerable support from the U.S. Instead, they’re victims of a sad neglect. They’ve been cut loose by a nation otherwise preoccupied. But the next Congress and administration should take up the cause of freedom in Singapore. They should exert their influences on Singapore to open up its political space to peaceful dissent and to embrace the benefits of political pluralism. Economic prosperity and political freedoms are not mutually exclusive in Singapore or anywhere else.

Above all, this country should call for judicial reform in Singapore because as J.B. Jeyaretnam would no doubt agree without independence there can be no rule of law.

Timothy Cooper is executive director of the human-rights group Worldrights. 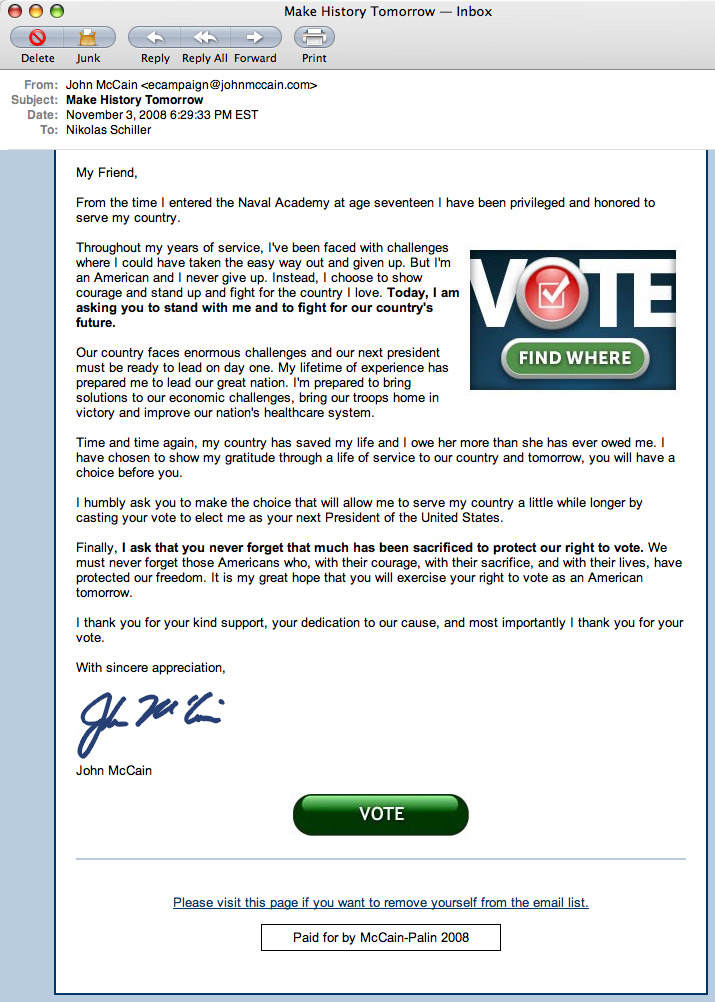 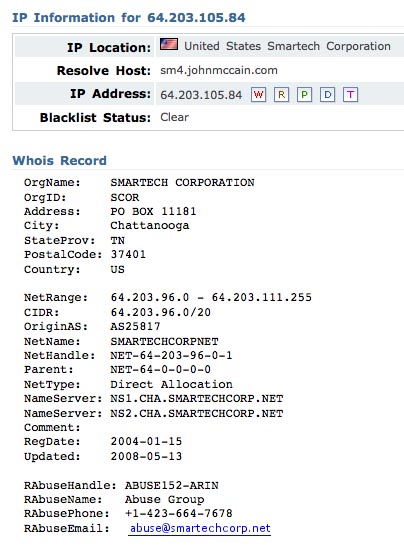 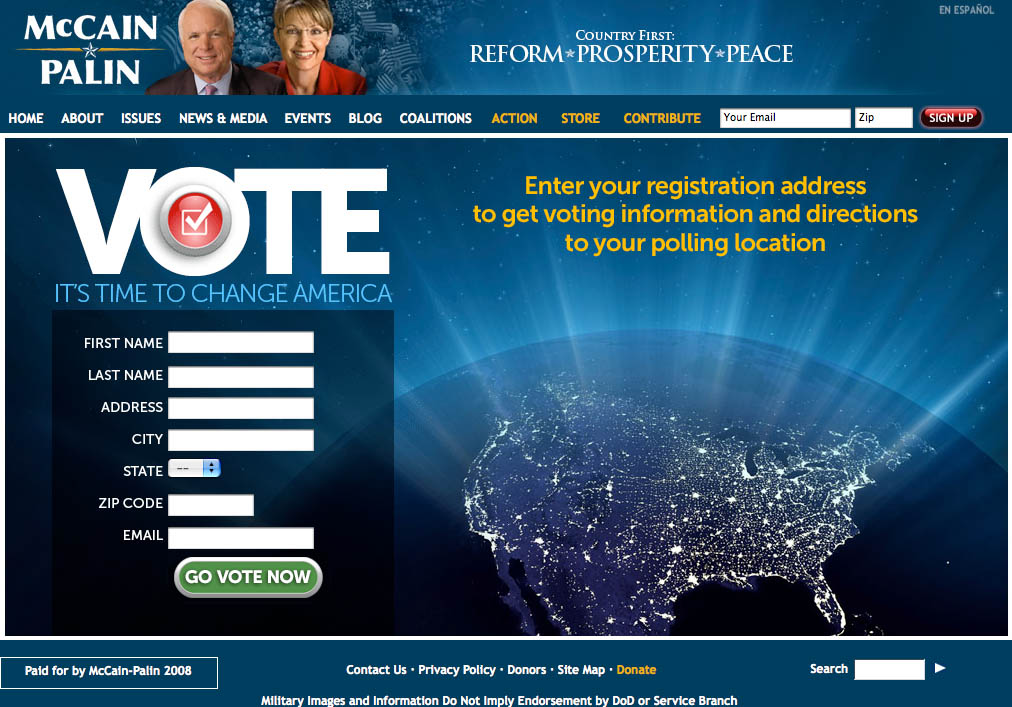 UPDATE: +5 Minutes
I decided to fill out the information with a fake name, supply the address of a vacant house on my block, and click the button. The resulting map did not load correctly on both Safari or Firefox. Well done! UPDATE: 11:15pm
Others who are reporting that received spam:
â€¢ DailyKos user SoonerG: McCain Campaign Just Spammed Me
â€¢ McCain Camp Resorts to SPAM in the 11th Hour
â€¢ I just got a spam e-mail from McCain… Related 2008 Election Entries: END_OF_DOCUMENT_TOKEN_TO_BE_REPLACED