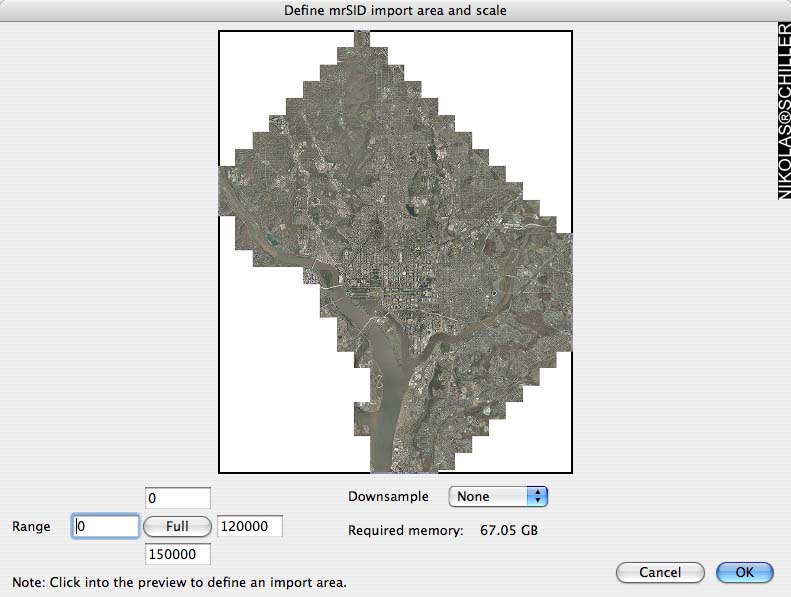 A couple weeks ago when I was writing the entry about crime in my neighborhood, I discovered that the DC Government’s Citizen Atlas was using aerial orthophotography taken in 2008. I subsequently checked the USGS website to see if they had obtained the dataset, but they were still using the imagery taken in 2005. I decided to e-mail one of my contacts in the Office of the Chief Technology Officer. I asked if the dataset was available to the public or if it was going to be ported over to the USGS’s distribution system, and to my chagrin, the offer was extended to mail me a copy of the entire dataset. About a week later I received the CD in the mail and today I started to explore all the brand new imagery that I now have at my disposal! I now have the ability to use aerial orthophotography of Washington, DC taken in 2002, 2005, and 2008.

I first must note that the roughly 67 gigs worth of aerial orthophotography of Washington, DC was all compressed using the Mr. SID file format and was able fit on one CD-Rom. While that level of digital compression is pretty insane (80 to 1), I still have my reservations about it. Almost two years ago I wrote about how Mr. SID has been the bane of my cartographic explorations, and well, not much has changed since then. There is still only one software program for Macintosh that I am aware of that allows users to uncompress the imagery locked away in the proprietary file format, GraphicConverter X for PowerPC-Macs.

Worse, I am having difficulty extracting the imagery that I want to use! The screen grab above shows the selection screen that pops up after I open the Mr. SID file containing the 2008 Washington, DC orthophotography. At first I was really excited that I could quickly and easily draw a box around the portion of the city I wanted to extract. However, after testing it out, I found that there is some latent bug in either the program or the file.

After I draw a box around the area I wish to extract, Graphic Converter spends a few moments decompressing the portion of the file, then it opens up the imagery. There is just one catch: the box I draw does not correspond to the imagery that opens up! For example, if I draw a box around the White House, a few moments later I am looking at imagery from Woodley Park neighborhood. After experimenting for about an hour, I discovered that the imagery is being extracted from somewhere northwest of where I am selecting. This is frustrating to say the least! Instead of quickly and easily obtaining the exact imagery that I want, I now have to do a series of trial & error selections in order to obtain exactly what I am looking for.

Moreover, due the level of compression used in Mr. SID, the uncompressed imagery contains small artifacts that diminish the overall quality of the original aerial orthophotography. To visualize this, imagine for a second that you decided to save a photograph using JPEG compression, but instead of selecting a high number (less compression) you select a very low number (high compression). When you look at the file that you saved, you can see little bits of digital static in the image. These artifacts are the result of high levels of digital compression in the Mr. SID file (80 to 1) and while its not excessive, it is present. I prefer uncompressed TIFFs because they generally look better.

The only way I’ve figure out how to reduce this annoyance is to actually reduce the size of the source aerial photography and in doing so, I’m reducing the overall spatial resolution of the original aerial photography. Released at approximately 15 centimeters per pixel, the imagery is so sharp that you can see people walking on the ground and be able to identify types of cars, but any reduction in size results in less precision and detail.

Nonetheless, I am very excited to start making more maps of Washignton, DC using the 2008 imagery! I look forward to exploring the nuances in development that have taken place over the years. I am also very appreciative of the DC GIS Program for providing me the new imagery free of charge. Thank You!