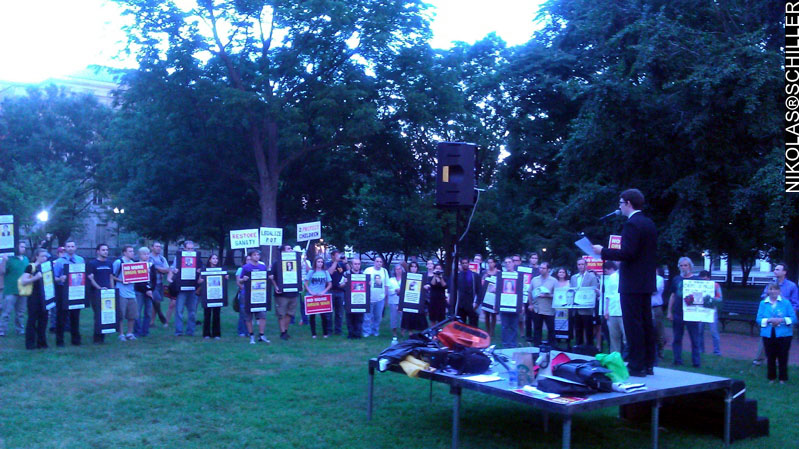 Today I setup the sound system for a somber vigil outside of the White House. Forty years ago today President Nixon declared a War on Drugs at a press conference and since then the United States has wasted trillions of dollars on an unwinnable war against the personal freedoms of American citizens. As you can read below, Nixon did not explicitly use the term “War on Drugs” at that press conference but instead used terminology that references combat. I can’t help but wonder, how much longer until this war is over?

I would like to summarize for you the meeting that I have just had with the bipartisan leaders which began at 8 o’clock and was completed 2 hours later.

I began the meeting by making this statement, which I think needs to be made to the Nation:

America’s public enemy number one in the United States is drug abuse. In order to fight and defeat this enemy, it is necessary to wage a new, all-out offensive.

I have asked the Congress to provide the legislative authority and the funds to fuel this kind of an offensive. This will be a worldwide offensive dealing with the problems of sources of supply, as well as Americans who may be stationed abroad, wherever they are in the world. It will be government wide, pulling together the nine different fragmented areas within the government in which this problem is now being handled, and it will be nationwide in terms of a new educational program that we trust will result from the discussions that we have had.

With regard to this offensive, it is necessary first to have a new organization, and the new organization will be within the White House. Dr. Jaffe, who will be one of the briefers here today, will be the man directly responsible. He will report directly to me, and he will have the responsibility to take all of the Government agencies, nine, that deal with the problems of rehabilitation, in which his primary responsibilities will be research and education, and see that they work not at cross-purposes, but work together in dealing with the problem.

If we are going to have a successful offensive, we need more money. Consequently, I am asking the Congress for $155 million in new funds, which will bring the total amount this year in the budget for drug abuse, both in enforcement and treatment, to over $350 million.

As far as the new money is concerned, incidentally, I have made it clear to the leaders that if this is not enough, if more can be used, if Dr. Jaffe, after studying this problem, finds that we can use more, more will be provided. In order to defeat this enemy which is causing such great concern, and correctly so, to so many American families, money will be provided to the extent that it is necessary and to the extent that it will be useful.

Fundamentally, it is essential for the American people to be alerted to this danger, to recognize that it is a danger that will not pass with the passing of the war in Vietnam which has brought to our attention the fact that a number of young Americans have become addicts as they serve abroad, whether in Vietnam, or Europe, or other places. Because the problem existed before we became involved in Vietnam; it will continue to exist afterwards. That is why this offensive deals with the problem there, in Europe, but will then go on to deal with the problem throughout America.

One final word with regard to Presidential responsibility in this respect. I very much hesitate always to bring some new responsibility into the White House, because there are so many here, and I believe in delegating those responsibilities to the departments. But I consider this problem so urgent–I also found that it was scattered so much throughout the Government, with so much conflict, without coordination–that it had to be brought into the White House.

Consequently, I have brought Dr. Jaffe into the White House, directly reporting to me, so that we have not only the responsibility but the authority to see that we wage this offensive effectively and in a coordinated way.

The briefing team will now be ready to answer any questions on the technical details of the program.