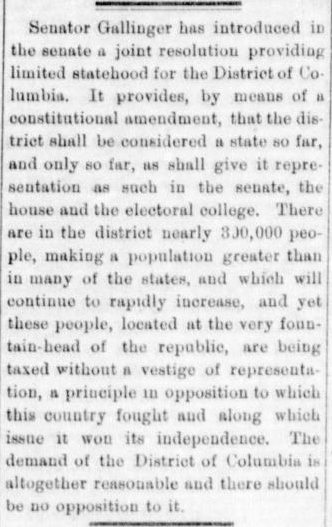 TO MAKE A STATE OF DISTRICT OF COLUMBIA

Mass Meeting of Residents Indorses the Scheme. Argument For And Against Admission to the Union– The President and New Mexico’s Delegation Special to The New York Times.

WASHINGTON, Dec. 13- A little byplay for the advocates of statehood and their opponents is promised before the contest in the Senate is entirely over. Senator Gallinger, who has espoused the side of Senator Quay and the admission of the three Territories that are demanding to become States, has, as Chairman of the District Committee, introduced a resolution to amend the Constitution and make a State out of the District of Columbia.

The idea has taken with many of the people of Washington, and meetings are being held to discuss the prospect seriously. Last night a mass meeting was held at Brightwood, one of the largest suburbs of the city, and the Gallinger resolution was unanimously indorsed, but with a suggestion that there be a limitation on the suffrage.

The meeting was attended by many of the prominent and wealthy citizens of the District. Pressure is being brought to bear on Senator Gallinger to offer an amendment to the Statehood bill looking to the admission of the District as a State.

So far as population goes, Washington and the District have a good claim to admission. Delaware, Idaho, Montana, Nevada, Utah, and Wyoming all rank below the District in population. In point of intelligence and prosperity, so long as the Government stays here, there will be little doubt on that score.

The presence of a large negro vote and dubious jurisdiction involved in being the neutral ceded ground on which the Federal city is placed have been the chief difficulties in the way of giving the district any political status. The courts have uniformly held that the district in its political character is unlike any other principality on earth, and more nearly resembles the Bishopric of Durham than anything else.

Delegate Rodey of New Mexico led a large delegation of his constituents to the White House to-day to urge on the President the claims of the three Territories to admission into the Union.

The New Mexicans came away not entirely satisfied with the President’s manner in receiving their arguments. He was cordial and treated his callers with all possible consideration, but he did not promise he would help them to pass the Statehood bill. This was what they wanted and anything less than this seemed inhospitable.

Senator Beveridge also had a talk with the President about the bill, and when he came away from the White House said he could not make any comment on what the President had said to him, but he was more than ever confident of the defeat of the Tri-State bill. Beveridge says that Senator Quay has claimed too many votes and cannot muster a majority.