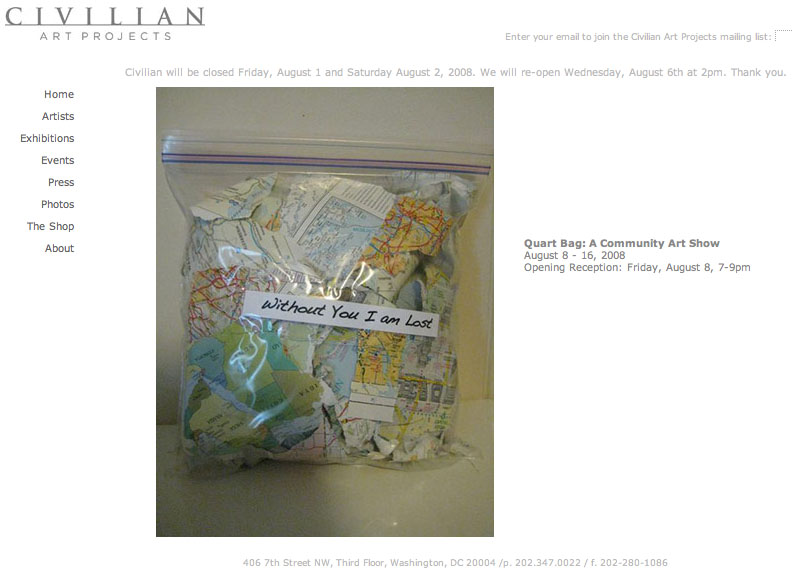 On July 21st, 2008 I received an invitation e-mail from the owner of Civilian Art Projects, a Washington, DC-based fine art gallery. The e-mail outlined the concept behind their upcoming group show called “Quart Bag,” which invited local artists to submit a ZiplocÂ® that has been decorated, converted, or redesigned. The uniqueness behind the concept, one that I’ve always enjoyed since I was a kid, is everyone is essentially given a prop and its up to the artist to get creative with it and transform it into something new & unique.

After reading the e-mail a few times over I immediately thought of using some of the maps that I had saved from my Artomatic exhibit. The map scraps were originally a bunch of cut up maps that I used for my Base Map Installation (see below). These maps were originally purchased using DC government grant money that was given to me in conjunction with the DC Commission on the Arts & Humanities 2008 Young Emerging Artist Award and I realized that I wasn’t about to throw all those maps away when Artomatic finished. So when I was dismantling the exhibit I saved as many of the maps as I could so that I could recycle them (like last night’s leftovers!) in a to-be-identified project.

With the recycling theme running through my head, I went downstairs to my kitchen, found an unused ZiplocÂ® bag in my pantry (gallon-sized not quart!), and proceeded to my basement to create this unique piece of art. The original idea was to fill the bag up with scraps of maps but after filling it up, I realized that there was something missing. Essentially, there was no message being conveyed and frankly I wouldn’t say a bag filled with scraps of maps means much to anyone, or worth $50/$100 unless of course, you were a collector of discarded maps and/or the maps were really old.

Upon further contemplation, I decided to empty out the bag and add a bit of text to the inside of the bag to give it some depth of meaning through an abstract message. I chose a phrase that combines the unique nature of maps with a subtle, but concise, message of longing: Without You I am Lost. This simple message speaks volumes (about a gallon) about who I am, where I am going, and how I’ve been feeling as of late. There were a few other phrases that I bounced around in my head like show me the way, you are not here, and get lost, but I felt that Without You I am Lost really captured the essence of how I was feeling at the time of it’s creation.

I went back upstairs to my room and printed out the text using the same font that I used in the bloody self-portrait taken after my recent mugging and had the text printed archival matte photographic paper. I then cut the paper down to size and found some clear packing tape to affix the printed text to. To give the clear tape some subtle flair, I used my lighter to burn the edges of the tape and then affixed it to the inside of the bag and filled it back up again with the maps.

Adding to this inferential geographic juxtaposition motif, the other side of the text features an upside-down portion of the Middle East and Africa to imply concept of being lost in the global context. Or more specifically, I am implying that American democracy has lost its way and the world has become lost. After all, the opposite of progress is congress, right? By placing the two locations on opposing sides of the central text, my message expands from a sincere message of longing to a subtle critique on American foreign policy and the disenfranchisement of Americans living in the capital city of the world’s most powerful nation.

A couple days ago I e-mailed the gallery director back indicating that I was interested in participating in the exhibition and attached the photograph of the bag. I wasn’t sure if I’d be able to participate because I was using a gallon-sized bag instead of a quart bag. Her response was that she thought it was perfect :-) Earlier this afternoon, about 30 minutes before I was going to leave my house and drop off the bag at the gallery, I received an e-mail notifying me that the photograph I had sent was currently on the front page of the gallery’s website. Grinning, I checked it out and took the screen grab above. I’m really looking forward to seeing the variety of submissions that will be on display. If you are in the Washington, DC area, you should come & check out the exhibition:

The Quart Bag Exhibition opens on Friday, August 6th from 7pm to 9pm @ the Civilian Art Projects, which is located on the 3rd floor of 406 7th Street NW, Washington, DC

In case you are interested in seeing what the maps were used for before they ended up in the bag in the photo above, in April of this year I produced the YouTube video below for promotion of my Artomatic 2008 exhibit: Related Art Gallery Entries: END_OF_DOCUMENT_TOKEN_TO_BE_REPLACED