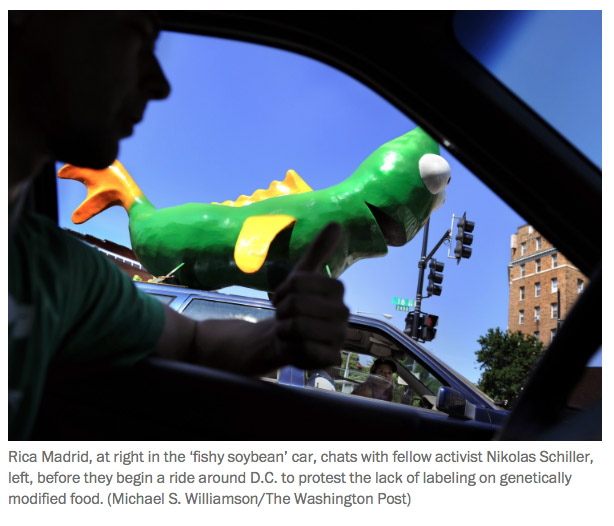 What is that thing?

Parked near the U Street Metro station is a junky Ford Escort with a fiberglass whatchamacallit on top. The red structure is shaped like an apple, except for the fins jutting from its sides. It has googly eyes, a goofy smile and a face more Muppet than man.

For weeks, it has befuddled neighbors. No one knows who owns it. No one knows what it means. And yet, it’s been spotted throughout Northwest. It has been parked at the new Costco. It has made weekend revelers in Adams Morgan question their sobriety.

“I’ve been trying to figure it out for days,’’ said a man walking near the 1800 block of Vermont Avenue. Then he sighted a second structure, this one atop a Volvo. Same googly eyes, but shaped like a green bean — with fins.

A breakthrough came Tuesday morning when 32-year-old Rica Madrid was seen getting into the car with the finned green thing. Its name is “Soyna,” modeled after a soybean, Madrid said. She pointed to the apple atop the Escort: “That is Goldie.’’

Madrid and her co-workers at Mintwood Media Collective (“Communication Strategies for Social Change”) helped create the two structures to convey the message that food sprayed with toxic chemicals is, in a word, “fishy.” Hence, the fins.

The two vehicles will be part of a caravan of activists that will depart in August on a coast-to-coast trip to Seattle, making stops along the way to lobby for legislation to label genetically modified food.

Right now, the connection between the cartoonish cartop produce and the cause is a little confusing. Mock labels will be added to explain it all, Madrid admits.

Meanwhile, 300-pound structures can’t fit inside rowhouses, so Madrid and her colleagues mounted them on the cars early.

These are the toils of creating protest art. It’s hardly an unusual activity in Washington, a magnet for protesters of all sorts. But it’s jarring to see the art without the context, as Madrid and her colleagues use the cars for routine daily errands — going to work, picking people up from the airport and bulk-buying groceries.

Nikolas Schiller, 32, who drives Goldie the Apple, doesn’t mind the baffled stares. No one fully understands what’s going in their food anymore either, he says.

“That [confusion] is kind of what we’re going for,” he said.

The kids smile when they see Goldie the Apple, because Goldie the Apple is smiling at them. It’s not unusual for someone to come up to Schiller or Madrid during lunchtime, asking whether the cars are new food trucks.

As Madrid climbed into the Volvo to head to work from Shaw, a neighbor walking with her 3-year-old approached:

“What is this all about?” Sandrea Ballestero asked. “We never see you!”

“We are protesting GMOs,” she said, using the acronym for genetically modified organisms.

They do, but it’s not ready yet.

Madrid drove past the suit-and-tie set downtown, some of whom, caught up in their smartphones, paid the car no mind. A man in a blue oxford shirt and khakis pulled out his smartphone for a quick pic. A window-washer scaling the low floors of a building saw the large soybean in the reflection of the windows and cheered. A baby in a stroller near Farragut Square looked into those googly eyes and started to bawl.

Occasionally, someone will ask what she’s doing, and she’ll tell them about genetically modified food. Sometimes the person will start sharing what he or she knows about the history of hybridization or genetic engineering or selective breeding — pretty sophisticated stuff that reminds Madrid that driving the vehicle has a serious purpose.

“Some people are really knowledgeable about the subject,’’ Madrid said. “You just have to be ready for people to debate you. I mean, this is Washington.”

This article was published on the front page of the Metro Section on June 13, 2013 and obtained online from Washington Post. The article is not in the public domain but is being republished here under the fair use doctrine of U.S. copyright law in order to document my advocacy for honest food labeling.