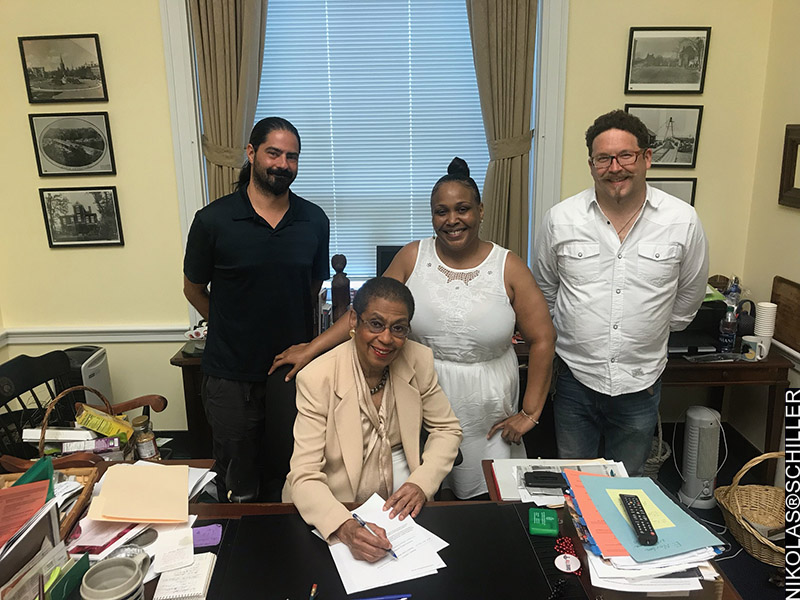 WASHINGTON, DC — Congresswoman Eleanor Holmes Norton (D-DC) today introduced her bill to permit the use of marijuana in states where it is legal—for medical or recreational purposes—in federally-assisted housing, including public housing and the Section 8 housing program. Norton held a signing ceremony for the bill with Sondra Battle, a District of Columbia resident who lives in Section 8 housing while suffering from fibromyalgia, a chronic disease that she treats by using medically-prescribed cannabis. Norton also thanked DCMJ co-founders Adam Eidinger and Nikolas Schiller for attending the signing ceremony. DCMJ brought to her the idea for the legislation and told Norton that residents like Sondra were the inspiration for the bill.

“I thank Sondra Battle and our DCMJ advocates for joining me to mark the introduction of what I am calling the ‘Sondra Battle Cannabis Fair Use Act,’” Norton said. “Residents like Sondra should not fear eviction from federally-assisted housing simply for using cannabis to treat their medical conditions. Our bill recognized today’s realities and proven needs. Individuals who live in states where medical and/or recreational marijuana is legal, but live in federally-assisted housing, should have the same access to treatment as their neighbors.”

Today I introduced my bill to allow cannabis use in public housing in DC and states where it’s legal for medical and/or recreational use. I signed the bill with Sondra Battle, a DC resident who lives in Section 8 housing and is prescribed cannabis to treat her fibromyalgia. pic.twitter.com/iyvUzpPMvA