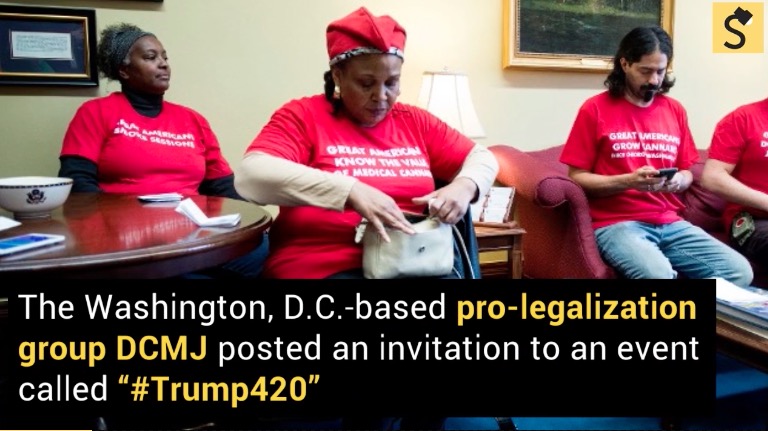 On 29 December 2016, the Washington, DC, based pro-legalization group known as DCMJ posted an invitation for an event called “#Trump420” on their web site:

You are cordially invited to join DCMJ for the inaugural #Trump420 taking place on January 20, 2017 in Washington, DC!

We will gather on the west side of Dupont Circle at 8am for coffee & tea and parade down to the National Mall at 10am. Along the way we’ll hand out 4,200 joints of legally grown cannabis! At 4 minutes and 20 seconds into President Trump’s speech we’ll light up! (unless President Trump comes out now in support of full cannabis legalization in all 50 States and DC!)

We legalized cannabis in Washington, DC and we are not going to let anyone take that away from us! This is an outreach opportunity to show President Trump’s supporters we are the marijuana majority! Join us for smokin’ fun time!

Possession of up to two ounces of marijuana is legal in the District of Columbia, thanks to the passage of Ballot Initiative 71, a campaign that was headed by the DCMJ in 2014. What is not legal, however, in D.C. is purchasing or selling marijuana. In this respect, the only legal way to distribute marijuana to large groups of people in D.C. is to give it away free of charge.

Merely smoking a joint on private D.C. land would be legal, DCMJ founder Adam Eidinger explained to USA Today, but not on federal land such as the National Mall, where the protest is scheduled to occur:

Eidinger stated that #Trump420 was not intended to be disruptive or explicitly anti-Trump. When we asked what success would look like for the #Trump420 event, DCMJ co-founder Nikolas Schiller provided us with this statement:

A successful #Trump420 is to have the President come out in support of full legalization in all states, territories, and the District of Columbia. While he has said in the past that cannabis should be left up to the states, DC is not a state, therefore we are concerned that DC could be targeted by the incoming AG. We want President Trump to instruct [Jeff] Sessions to not use taxpayer dollars enforcing cannabis laws that the majority of Americans want changed. One way to Make America Great Again is to acknowledge the failure of the war on drugs and work toward passing legislation (or through executive order) that removes cannabis from the Controlled Substances Act and allows states to implement their own laws.

Although DCMJ has stated they are not anti-Trump, they have been highly critical of President-elect Trump’s choice of Jeff Sessions, who is staunchly anti-legalization, for Attorney General and have been lobbying members of Congress against confirming him for that position, Schiller told us:

Yesterday we dropped off cannabis-related sample questions for Senator Sessions to all the Senators on the members of the Senate Judiciary Committee with the hopes that they will be asked at his confirmation hearing next week. We are concerned that Senator Sessions as the AG will roll back the reforms we’ve worked so hard to make and plan on attending the hearing.

How long it will take the group to distribute 4,200 free joints is unknown, but it is worth noting that organizers of one of the largest scheduled Inauguration Day protests, the Women’s March on Washington, estimate that around 200,000 people will show up for their event alone.