The Department ofJustice is committed to the enforcement ofthe Controlled Substances Act in all States. Congress has determined that marijuana is a dangerous drug and that the illegal distribution and sale of marijuana is a serious crime that provides a significant source of revenue to large scale criminal enterprises, gangs, and cartels. The Ogden Memorandum provides guidance to you in deploying your resources to enforce the CSA as part of the exercise of the broad discretion you are given to address federal criminal matters within your districts.
END_OF_DOCUMENT_TOKEN_TO_BE_REPLACED

In the yesterday’s newspaper article the DOJ’s 2009 Ogden Memo was mentioned, here is the full text of the document:

SUBJECT: Investigations and Prosecutions in States
Authorizing the Medical Use of Marijuana

This memorandum provides clarification and guidance to federal prosecutors in States that have enacted laws authorizing the medical use of marijuana. These laws vary in their substantive provisions and in the extent of state regulatory oversight, both among the enacting States and among local jurisdictions within those States. Rather than developing different guidelines for every possible variant of state and local law, this memorandum provides uniform guidance to focus federal investigations and prosecutions in these States on core federal enforcement priorities.

The Department of Justice is committed to the enforcement of the Controlled Substances Act in all States. Congress has determined that marijuana is a dangerous drug, and the illegal distribution and sale of marijuana is a serious crime and provides a significant source of revenue to large-scale criminal enterprises, gangs, and cartels. One timely example underscores the importance of our efforts to prosecute significant marijuana traffickers: marijuana distribution in the United States remains the single largest source of revenue for the Mexican cartels.
END_OF_DOCUMENT_TOKEN_TO_BE_REPLACED

When I got back home from yesterday’s hearing I wrote my friend at the Washington Post the following e-mail: END_OF_DOCUMENT_TOKEN_TO_BE_REPLACED 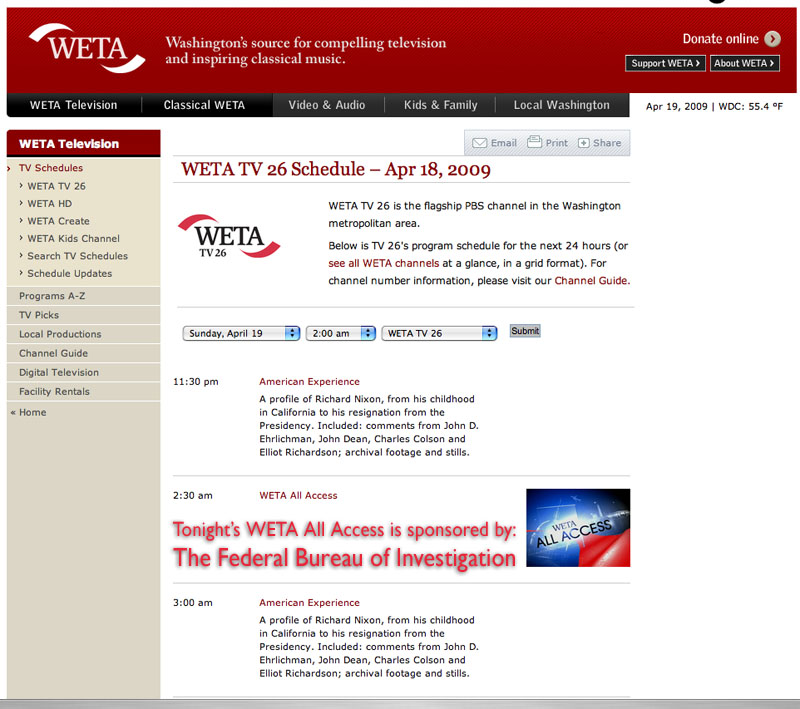 Back in April, I was home late on Saturday evening / Sunday morning and stumbled on to the Washington, DC PBS affiliate station WETA showing a Federal Bureau of Investigation recruitment video on their All-Access programming. It’s the first time and only I’ve seen this type of sponsored recruitment video on public television before.

Last week I noticed that a professor named Lisa Jevbratt at the University of California, Santa Barbara had her classroom lesson plan linking to my website. Her class “Art 122 – Advanced Digital Projects – Mapmaking as Art: using Google Maps/Earth and other online tools and data to create artistic maps,” had my website listed in the section “Map Related Art.” Flattered, I decided to look through some of her artwork, and found an interesting project called “Mapping the Web Infome.”

Mapping the Web Infome’ is a net art endeavor developed in conjunction with the exhibition LifeLike at New Langton Arts gallery in San Francisco. A group of artists were invited to use software developed for the exhibition. The Infome software enables the creation of web crawlers – automatic processes that access web sites and collect data from them – and the creation of visualizations/mappings of the collected data.

After looking through some of the results, I found this listing of the FBI’s web pages as they existed in 2001. I wonder how much has changed in the last 7 years?

Today I am posting something a little different- French Youtube videos.
END_OF_DOCUMENT_TOKEN_TO_BE_REPLACED 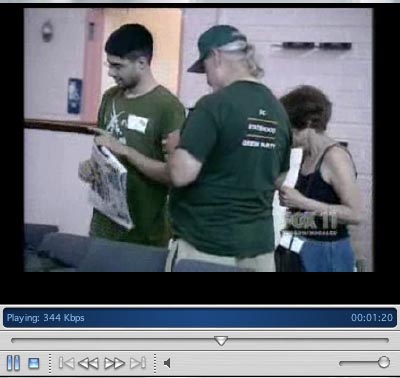 https://www.fox11az.com/sharedcontent/VideoPlayer/videoPlayer.php?vidId=78277&catId=142
(click the image to be taken to the page)