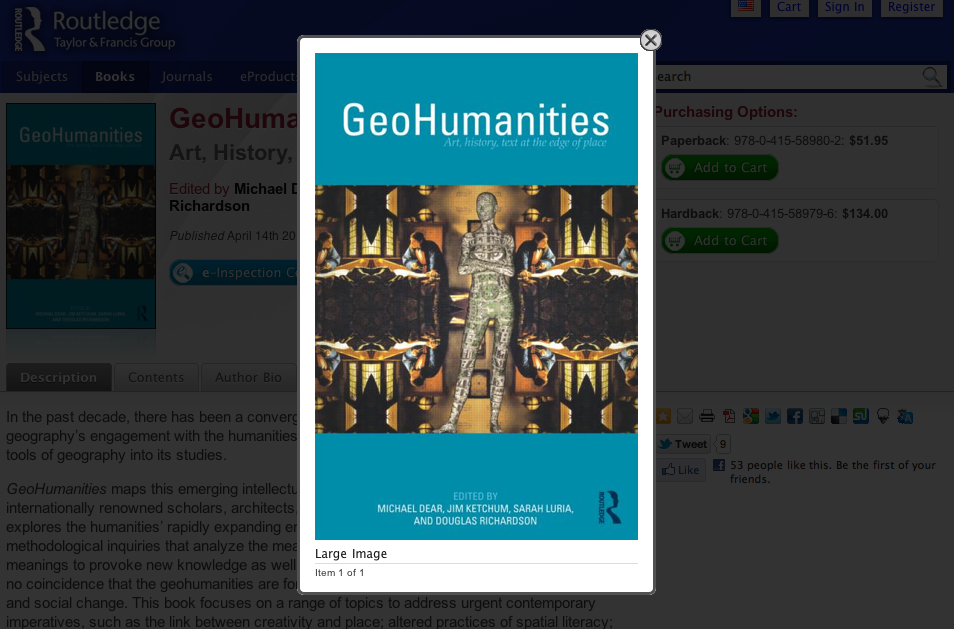 Geohumanities, the recently published book that features my map “The Modern Geographer” on the cover, was reviewed in the New York Times by Stanley Fish:

The Triumph of the Humanities

Our house in the western Catskills overlooks the Pepacton Reservoir, a 20-mile ribbon of water between Margaretville and Downsville. Maps on the Internet, depending on their scale and detail, will show you where the reservoir is in relation to nearby towns and roads. What they won’t show you, although every resident of the area knows about them, are the four towns — Arena, Shavertown, Union Grove and Pepacton — that were flooded in the middle ‘50s so that the reservoir could be constructed. (Today, after more than 50 years, resentment against New York City remains strong.)

The maps and pictures of the reservoir are determinedly linear; the eye follows the water in its journey down Route 30 toward the city. But for the the old-timers, and the new-timers who have been caught up in the romance of the lost towns, the eye stops and looks down to what are now the geological layers of civilizations, one on the surface and claiming a literal, no-nonsense empirical reality (“If you want get from Andes to Downsville, you can travel on either side of the reservoir”), and the other below the surface, where lie subterranean Brigadoons that emerge not every hundred years but whenever the reservoir gets so low that pieces of a drowned culture suddenly and unnervingly come into view. At those moments the eye simply cannot travel the straight line encouraged by visible coherences and road signs; the natural pull of forward progress is forestalled and one begins to ruminate on what lies beneath our every step as we raise our feet to take the next one.

There is now a (relatively) new discipline in which this breaking down of time into spatial units that are read vertically rather than horizontally is the obligatory gesture. It calls itself GeoHumanities and its project is nicely encapsulated in the title of one of the essays in a collection that officially announces the emergence of a field of study. The collection is called “GeoHumanities: Art, History, Text at the Edge of Place”; the essay (by Edward L. Ayers, an historian and president of the University of Richmond) is entitled “Mapping Time.”

Ayers’s project is to map the changes that followed upon the emancipation of the slaves after the Civil War. He and his colleagues begin with a simple map and then they locate populations on the landscape and “put down one layer after another: of race, of wealth, of literacy, of water courses, of roads, of railways, of soil type, of voting patterns, of social structure.”

The layered picture that results can then be “read” and a story can be told, the story of complex relationships that are frozen by the analysis but which, of course, are really in motion. The next step is to acknowledge the motion by using cinematic techniques that present the passage of time as spatial units that succeed one another. “By converting time to motion,” says Ayers, “we can visualize the passage of time (as one watches the hands of a clock move).”

Ayers calls this technique of representation “deep contingency,” and he acknowledges its artificiality. The metaphor of a layered reality “is a fiction of course, since the layers continually interact and the ‘top’ layer of humans constantly changes the ‘bottom’ layer of landscape; but it is a useful fiction, since it reminds us of the structural depth of time and experience.” The project is a synthesis of geography (now renamed Geographic Information Science, or GIS) and history: “GIS is about patterns and structures; history is about motion; by integrating the two, we can see layers of events, layers of the consequences of unpredictability.”

That is, we can read events not merely historically, as the product of the events preceding them, but geologically, as the location of sedimented patterns of culture, economics, politics, agriculture. What is being attempted is a reorientation of perception, an alternative way of interpreting the world in which “space is not merely in the service of time, but has a poetics of its own, which reveals itself through a geographical or topological imagination rather than a historical one” (Paul Smethurst, “The Postmodern Chronotope”).

The interplay in these quotations between a literary and a geographical vocabulary tells us what GeoHumanities is all about; it is the elaboration, by methods derived from the humanities, of “the stratified record upon which we set our feet” (the title of another essay and a quote from Thomas Mann). It is the realization, in a style of analysis, of the “spatial turn,” a “critical shift that divested geography of its largely passive role as history’s ‘stage’ and brought to the fore intersections between the humanities and the earth sciences” (Peta Mitchell in “GeoHumanities”).

“Intersections” is perhaps too weak a word, because it suggests two disciplines that retain their distinctiveness but collaborate occasionally on a specific project. The stronger assertion, made by many in the volume, is that the division between empirical/descriptive disciplines and interpretive disciplines is itself a fiction and one that stands in the way of the production of knowledge.

An apparently empirical project like geography is, and always has been, interpretive through and through. “The map has always been a political agent”(Lize Mogel), has always had a “generative power” (Emily Eliza Scott), and that power can only be released and studied by those who approach their work in the manner of literary critics. Geography “demands a reader who is at once an archeologist, geologist and geographer, a reader who … is at all times attentive to the stratification of history, memory, language, and landscape and who can read obliquely through their layers” (Peta Mitchell).

If interpretive methods and perspectives are necessary to the practice of geography, they are no less necessary to other projects supposedly separate from the project of the humanities. And that is why, in addition to GeoHumanities, we now have Biohumanities (“the humanities not only comment on the significance or implications of biological knowledge, but add to our understanding of biology itself” — Karola Stotz and Paul E. Griffiths), Disability Studies (of which the X-Men films might be both a representation and an instance), Metahistory (the study of the irreducibly narrative basis of historical “fact”), Law and Literature (the laying bare of the rhetorical and literary strategies giving form to every assertion in the law), Cultural Anthropology (an inquiry into the very possibility of anthropological observation that begins by acknowledging the inescapability of perspective and the ubiquity of interpretation), Cultural Sociology (“the commitment to hermeneutically reconstructing social texts in a rich and persuasive way” — Jeffrey C. Alexander and Philip Smith), and other hybrids already emergent and soon to emerge.

What this all suggests is that while we have been anguishing over the fate of the humanities, the humanities have been busily moving into, and even colonizing, the fields that were supposedly displacing them. In the ‘70s and the ‘80s the humanities exported theory to the social sciences and (with less influence) to the sciences; many disciplines saw a pitched battle between the new watchwords — perspective, contingency, dispersion, multi-vocality, intertextuality — and the traditional techniques of dispassionate observation, the collection of evidence, the drawing of warranted conclusions and the establishing of solid fact. Now the dust has settled and the invaded disciplines have incorporated much of what they resisted. Propositions that once seemed outlandish — all knowledge is mediated, even our certainties are socially constructed — are now routinely asserted in precincts where they were once feared as the harbingers of chaos and corrosive relativism.

One could say then that the humanities are the victors in the theory wars; nearly everyone now dances to their tune. But this conceptual triumph has not brought with it a proportionate share of resources or institutional support. Perhaps administrators still think of the humanities as the province of precious insights that offer little to those who are charged with the task of making sense of the world. Volumes like “GeoHumanities” tell a different story, and it is one that cannot be rehearsed too often.