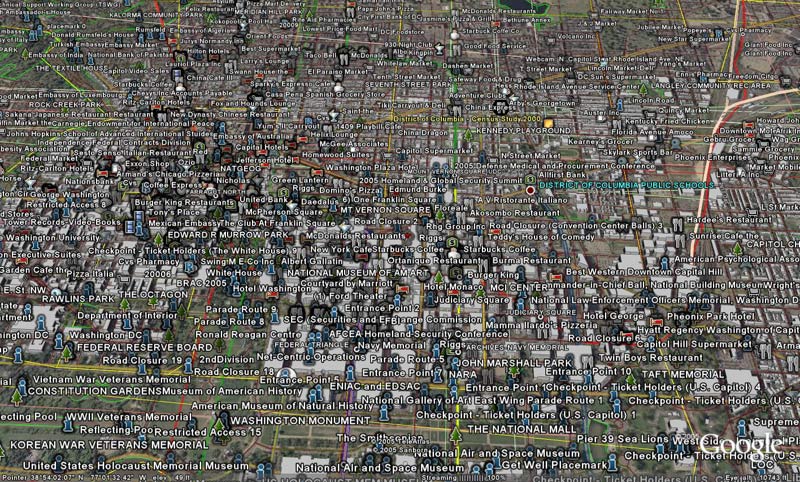 Above is a screen shot of downtown DC with nearly all the default layers turned on. I call it “Google’s DC TMI,” which basically means, Too Much Information! I feel it geographically represents the cacophony of information that Google offers.

So on to the review of Google Earth…

I like it, make that, I love it! I feel that this is the best geovisualization program there is on the planet right now, and this both scares me and excites me.

It scares me because it is so advanced that it leaves the current GIS software packages in the dust, and I don’t know if Google will take it’s wealth and reinvest into different communities the way the current GIS leader, ESRI, has done. ESRI’s “ArcGlobe,” their Google Earth equivalent, runs like a dinosaur with arthritis.

Granted Google Earth does not have the power the ArcGIS has in regards to spatial data manipulation, but it is so much faster and robust that I see the high end versions of Google Earth stealing quite a bit of the market share away. What I see first is companies and municipalities downloading Google Earth, purchasing imagery from a private company, and using Google Earth to do basic manipulations. Since the learning curve is so minimal, companies will not have to spend money to train their employees to use other sophisticated software, nor will they have to fork out a metric fuckton of money to purchase that specialized software. Even the pro version of Google Earth is still nearly half the price of ArcGIS!

As to what excites me….hellaz! The default layers allow for some nice geovisualizations that contain some information that is very useful & rather cool– the 3D buildings layer is awesome (check out New York if you have a chance!!). This was created using LIDAR technology and I think it takes geovisualization to a whole new level.

I just read the information about Google’s Keyhole Markup Language (KML) and I am already in the stages of making my own customized layers for Google Earth. Although I love NASA’s World Wind immensely, the ability to add content to it is slightly harder. My first project is to collect all the coordinates of the Geography Departments around the United States to be used for a work project. I’ve got about 20 down and about 300 to go….

As for navigation, I prefer World Wind better. The use of the mouse buttons is laid out better, so you can zoom, pan, and tilt quickly. Google Earth doesn’t take advantage of the right mouse button the way World Wind does to tilt quickly. I imagine that Google will implement this option in future releases. I also don’t like the zoom-in process in Google Earth… basically when you use the scroll wheel to zoom in, there isn’t a subtle zoom in, rather there are levels of zooming in. The right button is used for zooming in as well and I think this is poor use of the button because the scroll wheel can do the same job!

The integrated web browser in Google Earth is another great feature! There is one problem I’ve found with it though. When using the browser to find a specific location via Google Maps, there isn’t a way to synch up the two programs. The Google Earth search bar (not the web browser) doesn’t search actual locations very easy, so I’ve found that I’ve had to use the search and web browser simultaneously to find some locations. Yet this is really minor problem that will be fixed in newer versions.

The measure tool is probably my favorite nugget in Google Earth. You can measure “straight as the crow flies” or you can make a path of lines to find the exact mileage to locations. I see this being very useful in the future. One application I already envision, is when another plane flies into restricted airspace, and the news says it “made it’s way to less than a mile from the White House,” I’ll be able to see the exact location of where the plane was most likely at.

All in all, Google Earth just raised the bar for all other geovisualization software programs, as well as most high end GIS programs. I am very excited to see how pervasive this program becomes and how many people begin to better understand geography through this program.