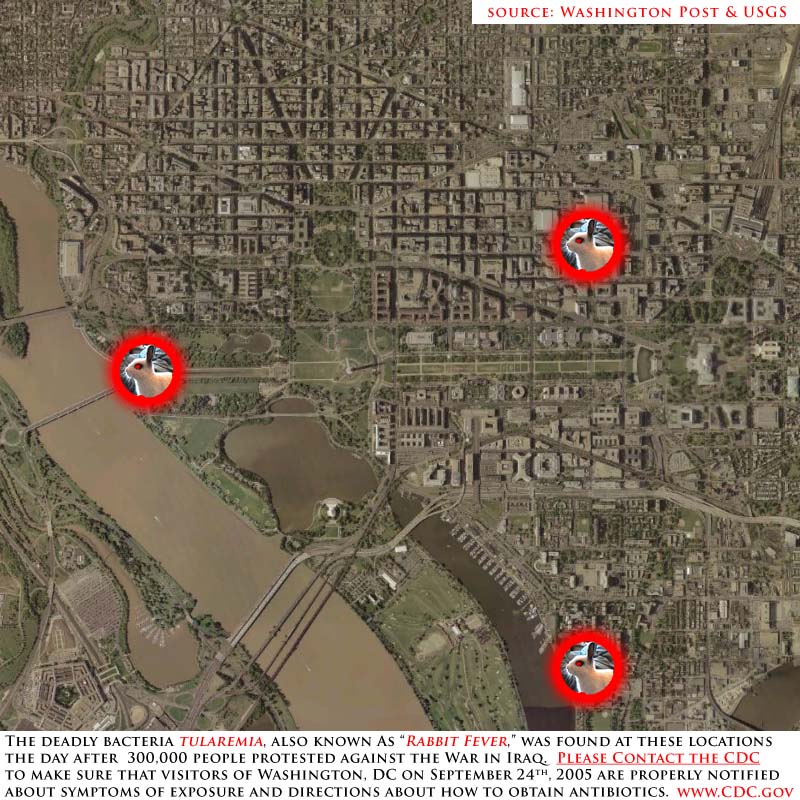 The other (below) is a quick & dirty spatial analysis of the area around the protests made using NASA’s World Wind (free), Google Earth (free), and Photoshop. I used the measure tool in Google Earth to measure a mile from the Lincoln Memorial, I used World Wind to acquire the USGS imagery, and Photoshop to draw the circles. The Lincoln Memorial’s circle served as the template for the other two sites.

Since the BioWatch sensors measure the ambient air quality (ie, the wind blowing around them), that means that for the bacteria to be found at 3 different locations, the bacteria would have had to drift from somewhere nearby or above and there had to be enough of it released to spread out over 3 miles.

What this map does not include, and is very crucial to it’s effectiveness, is the locations of the other 3 other BioWatch sensors that also picked up the bacteria in the downtown area and the direction of the wind. (FOIA)

For instance, if there was a sensor located somewhere within the triangle of A, B, and C that did not test positive, then it might all be a fluke. The articles below state that a total of 6 sensors found the bacteria but only 3 locations were disclosed in the article. In regards to the wind, I remember the wind blowing South-Southeast that day, which would explain the Fort McNair sensor.

I created two different colored circles with 1 & 2 mile radii (orange and yellow respectively) and placed these over the locations of the sensors which were disclosed in the Washington Post article on 10.2.05 to show the spatial possibility of being exposed to the bacteria.

The argument that it was from people kicking up dust is rather weak. Being on the grounds of the Washington Monument from 9am to 3am on September 24th, 2005, I can say that in the morning there was dew on the ground and in the afternoon it lightly drizzled (rain actually purifies the air, which might be why fewer sensors detected the bacteria).

My presence at the National Mall during the protest was near the confluence of two circles, and so was many of yours. I am not sick, but if you know someone who is having flu-like symptoms, please please, contact the CDC.

Lastly, I am not trying to be all conspiracy here. I am quite pissed that the DC Government was not notified until the end of the incubation period.

I am pissed that this is not a national news story because “rabbit fever” could be replaced with “anthrax” or “bird flu” and the 300,000 or so people who came to DC that weekend would be aware of why their friends might be sick.

Granted this might cause a “panic” and prevent people from coming to future protests, but if you put it into a different context, I believe there was a release of a weaponized grade (military) Tularemia at a peace protest and there has been no outcry anywhere.

: click the image to open the full size map : 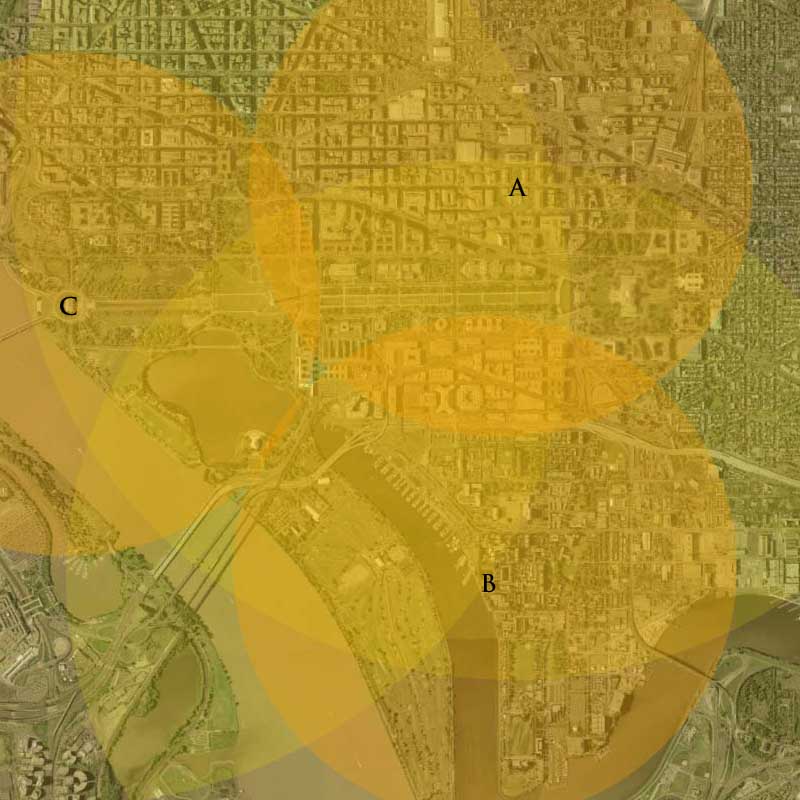 Support articles:
Progressive Review
Article on Tularemia- one week before the protest
GovExec: This happened in Houston…

A week after six bioterrorism sensors detected the presence of a dangerous bacterium on the Mall, health officials said there are no reports that any of the thousands of people in the nation’s capital Sept. 24 have tularemia, the illness that results from exposure to the bacteria.

Federal health officials are still testing the samples from air sensors on the Mall and in downtown Washington that collected a small amount of the tularemia agent, which can cause flulike symptoms and is usually treated with antibiotics.

The bacteria probably was not the result of nefarious activity, according to federal investigators. “There is no known nexus to terror or criminal behavior. We believe this to be environmental,” said Russ Knocke, spokesman for the Department of Homeland Security.

The mission for health officials now is to figure out how the bacteria got there, why they were detected that day and whether they are from a strain that doesn’t affect humans.

“Our purpose now is to reach into the medical community just to make sure nobody out there has any symptoms,” said Von Roebuck, spokesman for the federal Centers for Disease Control and Prevention. “There is an incubation window of one to six days, but we still want to get this information into clinicians’ hands.”

Health officials in the Washington area were notified Friday that the filters on biohazard sensors that make up the BioWatch network detected the bacteria Sept. 24, when tens of thousands of people were on the Mall for antiwar demonstrations and the National Book Festival.

The samples were collected between 10 a.m. Saturday and 10 a.m. Sunday. The naturally-occurring biological agent — which is on the “A list” of the Department of Homeland Security’s biohazards, along with anthrax, plague and smallpox — was detected in small amounts, said Gregg A. Pane of the D.C. Department of Health.

Detection of the bacteria turned into an incident with nationwide implications, because thousands of protesters had come from throughout the country. The infection is not spread from person to person, but tracking potential patients became a coast-to-coast undertaking. Police said that more than 100,000 people attended the rally; organizers put the figure at 300,000.

After the filters were tested in Washington, further tests were done by CDC laboratories in Atlanta, Knocke said.

Meanwhile, the CDC was using its nationwide tracking system to look for unusual occurrences of pneumonia-like symptoms in every state, Roebuck said.

After seeing no cases and finding that the levels of tularemia in their samples were low, health officials at the CDC decided Friday night to release their findings in the event that there were cases, on the sunset of the incubation period, that weren’t being detected, Roebuck said.

Pane said he learned of the biohazard alert that night, when CDC officials told him that sensors at the Lincoln Memorial, Judiciary Square and Fort McNair tested positive for the bacterium.

He immediately put out an alert to hospitals, clinics, doctors and pharmacies in the area to be on the lookout for symptoms, which can resemble pneumonia. “The linchpin is that we’re still in the incubation window, so we really don’t know that there were no cases,” he said.

Pane said one theory is that tularemia bacteria, which occur naturally in soil, might have been kicked up by the thousands of feet stomping on the Mall grounds that day.

Homeland Security and the CDC work together to operate the BioWatch sensors. The $60 million-plus system was created in 2001 to monitor air in more than 30 U.S. cities.

The system recently was criticized in a June report by the Government Accountability Office. It highlighted communication problems within the network and questioned the nation’s capabilities in environmental surveillance, an emerging technical field.

A similar incident occurred in Houston in October 2003, when two air sensors detected fragments of tularemia bacteria. There were no human cases of tularemia reported after the incident, and some experts in the bioterror field said they believe the incident was actually spurred by a strain of the bacteria that does not affect humans.

“It’s probably something that just lives in the environment,” said Tara O’Toole, who is director of the Center for Biosecurity, sponsored by the University of Pittsburgh Medical Center. “We forget that microorganisms rule the world. Now we’re looking and finding things we didn’t know were there.”

Tularemia, often called “rabbit fever” because small animals are often carriers in rural areas, was amassed by the U.S. military as a biological weapon in the 1960s.