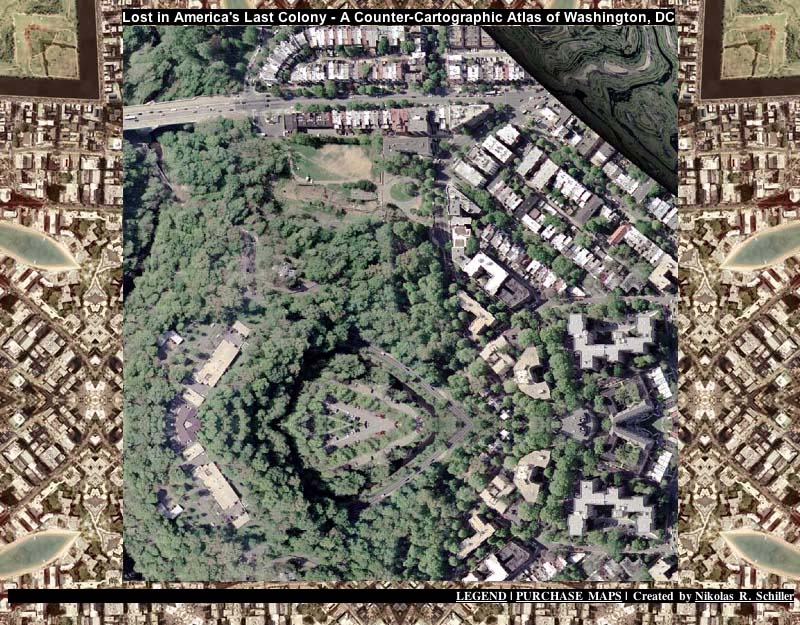 View the map’s Legend after the fold:

:Legend of Lost in America’s Last Colony:
This interactive atlas is driven by a basic php script that randomly loads a jpeg upon each visit. The jpeg comes from a folder that contains 266 Zooms & Cuts from every map I’ve made of Washington, DC. The background is Zoom From The Center of each of the maps I made in 2006 not located within Washington, DC (loaded from a folder that contains 145 images). Each time the visitor clicks on the DC map, the page reloads a new foreground and background.

Thus the Washington, DC map detail is always surrounded by a location somewhere in America. This was done to express the sad fact that Washington, DC is ruled by those living outside of it’s 61.4 square perimeter. Without a formal voice in the House or Senate in Congress, Washington, DC residents are colonists forced to live under the tyranny of those in living in the background.

Vocabulary:
“Zoom” – Any image that features the exact center of the map. There were two types of zooms made for nearly all maps. They were created to show scale.
“Zoom To Center” – Images that are the exact 800×800 pixels of the map’s center.
“Zoom From The Center” – Images that the map’s exact center that reduced from the central 4200×4200 section of the map to 800×800 pixels.
“Cut” – A detail from any portion, except the center, of a map at various scales.