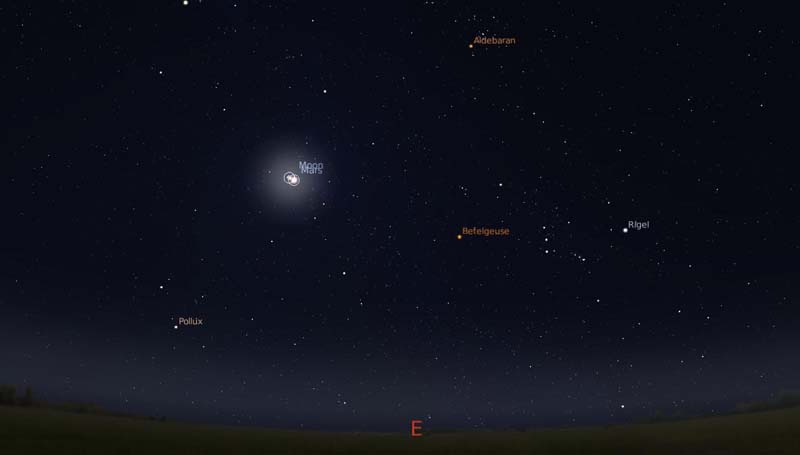 Below is some text copied from the Astroprof’s Page:

Interestingly, the perspective that you see on the conjunction will depend also on your latitude. That is because the Moon is vastly closer than Mars. So, from different latitudes, the Moon will appear slightly farther north or south in the sky. This conjunction is particularly close. In fact, it is so close that if you are far enough north, then youâ€™ll even see the Moon pass in front of Mars. That sort of event is called an occultation. You would be able to see the Moon occult Mars if you were in northwest Canada, Alaska, northern Russia, the Arctic, and part of far northern Europe.

As interesting as the Moon and Mars conjunction, it is also interesting to note that several other things are happening right now with the Moon and Mars. The Moon is Full tonight. Full Moon occurs when the Moon is opposite the Sun in the sky. But, the Winter Solstice was just days ago, on December 22. On that date, the Sun appears as far south as possible in the sky. This means that the Moon is currently almost as far north as it can get in the sky, being about 28 degrees north of the celestial equator. Another interesting fact is that the Moon, which has an elliptical orbit, was closest to Earth just yesterday, making it appear slightly larger than normal. And thereâ€™s even more! Mars is at opposition on December 24. On that date, Mars will be as close to opposite the Sun as it will get this year. You can think of it as the day that Earth passes Mars in its orbit. In an interesting footnote to that piece of information, though, is that Earth and Mars were actually closer together a few days ago, on December 19, than they are today. This is because of how the orbits of Earth and Mars are orientated. Earth is currently heading towards its closest distance to the Sun (which will be in early January), and Mars is on its way towards its farthest distance from the Sun.

So, if you get clear skies tonight, go out and take a look at this rather unusual set of circumstances.